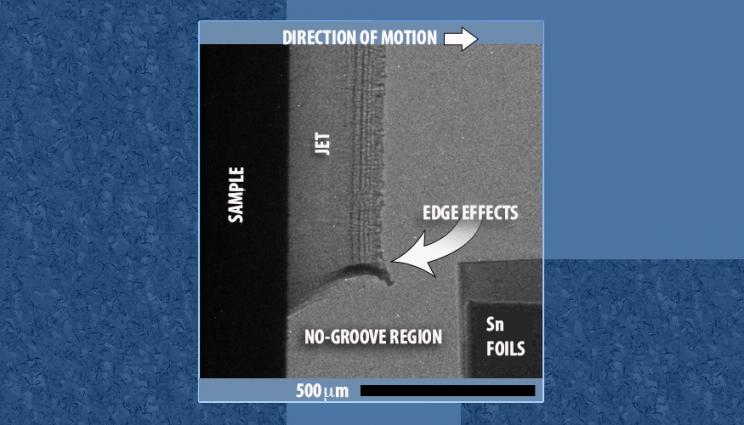 Lawrence Livermore National Laboratory (LLNL) scientists have experimentally tested the predictions of a 2020 study that computationally investigated the effect of melting on shock driven metal microjets. That earlier work predicted that melting the base material does not necessarily lead to a substantial increase in jet mass.

The LLNL team confirmed the predictions of microjet behavior with liquid and solid tin microjet experiments. The work, led by LLNL scientist David Bober, is featured in the Journal of Applied Physics and was chosen as an editor’s pick.

Bober said microjets are important to study because they are examples of broader jetting and ejecta processes that occur throughout condensed matter shock physics, meaning anything from explosives to asteroid impact.

Bober said the team was motivated by a set of simulations performed by LLNL design physicist Kyle Mackay, who is also a co-author of the present study. The work lead by Mackay can be found here and summarized here.

“Mackay’s simulations showed a very surprising trend and we basically wanted to see if it was real,” Bober said. “Specifically, that work predicted that melting the base material might not always lead to a dramatic increase in the mass of material ejected from a surface feature, which goes against the conventional wisdom of how these things are supposed to work.”

The research was conducted by cutting a small groove in the top of a tin plate. The team then hit the bottom side with a fast-moving projectile. That caused a fluid-like jet of tin to be thrown forward from the groove and into the path of an intense X-ray beam.

“We used those X-rays and an array of high-speed cameras to take a series of pictures of the flying tin jet, which then let us calculate things like the jet’s mass and velocity,” Bober said. “For the ability to do all that, we are indebted to many colleagues, especially those at the Dynamic Compression Sector at the Advanced Photon Source at Argonne National Laboratory.”

Bober said he is excited to explain how the results occur in nature and in simulations. The team has recently collected follow-up data measuring the local phase of the jets and also plan future shots to explore the material parameters they think might be most important to the phenomena.

“The team still does have work ahead of them to understand what exactly is going on in the experiments,” Bober said. “I hope we are on the path to improving ejecta models by detailing the physics that happens around the melt transition.”

In addition to Bober and Mackay, co-authors include Minta Akin and Fady Najjar.