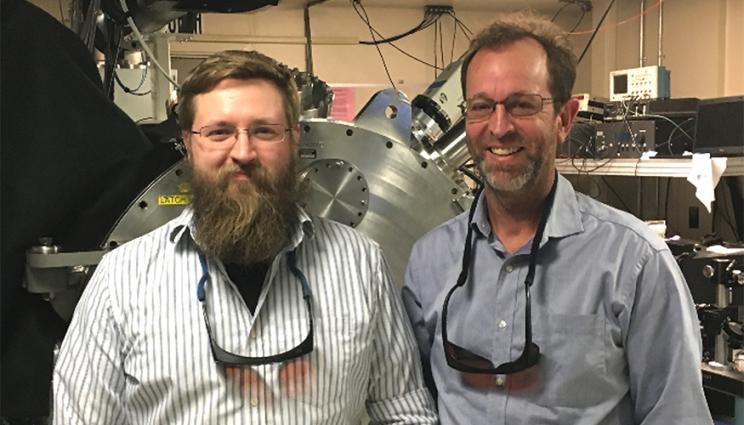 Elijah Kemp, left, and Oggie Jones at the Janus target chamber in the Lab’s Jupiter Laser Facility during the first week of experiments. This file photo was taken prior to the COVID-19 pandemic.

The project helps support two major Laboratory focus areas, including helping to advance additive manufacturing and by enabling improvements in performance of hohlraums — which are laser-heated cavities that produce an X-ray radiation drive that implodes a deuterium-filled capsule.

The work also supports the advancement of the state-of-the-art in high energy density science. In particular, by enabling more efficient hohlraums, it should help reach the inertial confinement fusion (ICF) program goal of achieving ignition in the laboratory.

Oggie Jones, lead author of the work which was featured in Physics of Plasmas, said to the team’s knowledge this was first time experiments have been made on laser-heated structured additive manufactured foams.

The major findings in the research showed that laser-heated additive manufactured foams behaved in many ways similarly to chemical (aerogel) foams of similar densities. The amount of backscattered laser light for a given laser intensity and the propagation speed of a thermal wave though the plasma were similar.

The team tested geometrically similar additive manufactured foams, one with 0.5 micron-thick filaments and one with 10-micron thick filaments. The backscatter and X-ray image signatures were nearly indistinguishable. The team found that published foam analytical models were generally able to explain the measured thermal propagation speeds and temperatures measured in the experiments.

Jones explained that the use of foam materials in hohlraums opens up new design possibilities in indirect drive in inertial confinement fusion. In particular, foams can be placed inside the hohlraum to line the walls.

“If the density of the foam is carefully selected, it is possible to change how the hohlraum wall material expands with time and thus potentially improve the symmetry of the radiation drive onto the ICF capsule,” he said.

In addition, very low density foams doped with various elements can be used to tailor the plasma conditions inside the hohlraum and potentially mitigate laser plasma interactions (laser backscatter). Additive manufactured foams allow the finest control over the plasma conditions. Density and dopant gradients can be built into the foam. Since these foams are inside the hohlraum, the way they are heated by the laser is key to understanding their overall impact on hohlraum performance.

The experiments used a single 527-nanometer (green) laser beam. The laser pulse was 200 joules, about two nanoseconds in duration and resulted in a peak laser intensity of 3x1014 W/cm2 on the foam targets. During a week of beam time, the team shot approximately 20 different foam targets.

The novel foam targets were produced at LLNL by a group led by Stadermann, Juergen Biener and Oakdale.

This research has led to a follow-on LDRD project titled “Foam Fills for LPI Suppression.” In this project, researchers will explore specific low-density foam fill configurations that lead to reduced backscatter in ICF hohlraums.

“If successful, this research could enable hohlraums to operate at fill densities that did not work with simple helium gas fills,” Jones said. “This would open up an area of design space that was previously closed due to excessive laser backscatter.”