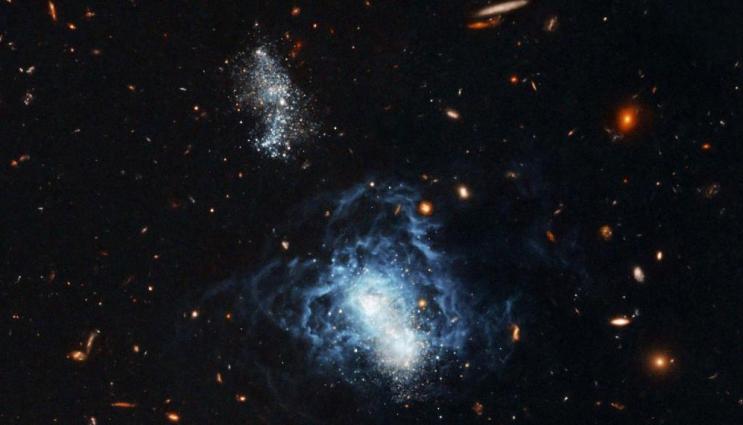 The most direct — and thus most solid — prediction of Big Bang nucleosynthesis concerns helium-4, each nucleus of which consists of two protons and two neutrons. However, helium-4 is also a standard product of stellar nuclear fusion. In order to infer the primordial helium-4 abundance, astronomers turn to certain dwarf galaxies. This image shows an important example, the galaxy "I Zwicky 18," a dwarf galaxy rather close to us by intergalactic standards, a mere 45 million light years away. Image courtesy of NASA

Using simulations and calculations, Lawrence Livermore National Laboratory (LLNL) nuclear scientists for the first time have accurately predicted the properties of polarized thermonuclear fusion. Analogous calculations could be used to answer some of the most fundamental questions about the origins of the universe and the evolution of stars.

For decades, nuclear scientists have been trying to harness the energy produced by the thermonuclear fusion of some of the lightest nuclei, deuterium (D) and tritium (T), to power thermonuclear reactors of the future.

In spin polarized DT thermonuclear fusion — where the D and T nuclei are "spinning" in the same direction — the fusion rate could be enhanced by as much 50 percent and the produced charged helium (He) nuclei could be more efficiently focused to heat up the fuel. This is one of fusion technology’s next frontiers.

However, the benefits of polarized fusion hinge on the survival of the polarization within the DT plasma, and a complete understanding of how the fusion rate enhancement and initial He alignment vary with temperature and degree of polarization.

In the new research published in the Jan. 21 edition of the journal Nature Communications, the LLNL team for the first time used validated models of the interactions of neutrons and protons (the constituents of nuclei) and a powerful ab initio reaction method to accurately predict the properties of the polarized DT thermonuclear fusion. The research establishes a better understanding of the rate of DT fusion in a polarized plasma.

Thermonuclear fusion is a type of nucleosynthesis (the process of making atomic nuclei) in which lighter elements, such as hydrogen and helium, are converted into heavier ones — such as carbon and oxygen — and in the process release large amounts of energy. Thermonuclear fusion occurs naturally in stars, which — from birth to death — are fueled by nucleosynthesis, and also plays an important role in explaining the primordial abundances of elements after the Big Bang. Because of this, thermonuclear reactions are of great interest to astrophysicists who seek to answer some of the most fundamental questions about the origins of the universe and the evolution of stars.

The probability of two positively charged nuclei fusing together is extremely small at the stellar energies required by astrophysical models. This makes Big Bang and stellar nucleosynthesis reactions difficult to replicate and measure in a laboratory setting and introduces large uncertainties in the predictions of elemental abundances and stellar evolution.

"Analogous calculations to the polarized DT fusion could be used in the future alongside with available experimental data to provide the thermonuclear reaction data and level of accuracy required to improve the predictivity of astrophysics simulations," said LLNL physicist Sofia Quaglioni, one of the authors of the paper.

The research combined first-principles approaches with high-performance computing to model thermonuclear reactions in the no-core shell model with continuum. The calculations for the polarized DT fusion required more than 200 Mcpu-hours on the Livermore Computing Vulcan and Quartz machines.

Guillaume Hupin (a former LLNL postdoc) of Université Paris-Saclay and Petr Navrátil (a former LLNL staff scientist) of TRIUMF in Vancouver also contributed to this research.

The research was funded in large part by Quaglioni’s Department of Energy (DOE) Office of Science Early Career Research Program award and the Lab’s institutional Computing Grand Challenge program and is based upon work supported by the DOE’s Office of Science, Office of Nuclear Physics.