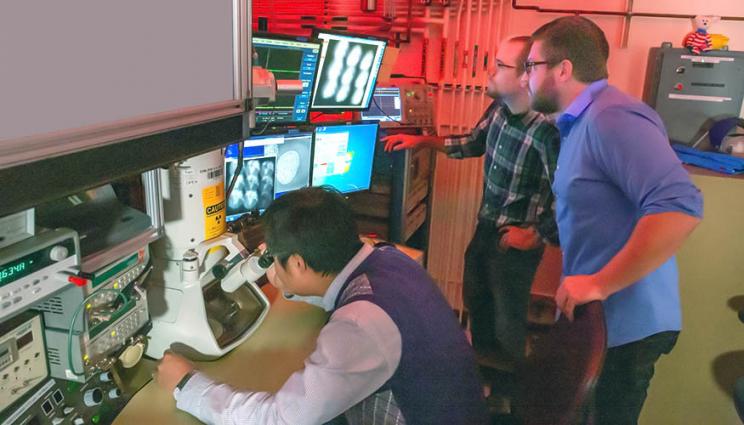 Combining a specially designed straining apparatus with LLNL’s Movie Mode Dynamic Transmission Electron Microscope (MM-DTEM), capable of capturing a series of nine images over a period of one to 100 microseconds, the researchers pulled apart copper samples at strain rates comparable to the impact of a bullet, visually imaging at the nanoscale the metal’s deformation as it happened. The research was published online by the journal Materials Today on Dec. 16.

“Until now, materials deformed at such strain rates could only be characterized in an electron microscope after deformation took place,” explained lead author and LLNL materials scientist Thomas Voisin. “Such postmortem analyses are highly valuable but limit observations to a material that is heavily damaged, masking the origin and evolution of microstructural changes. What we did was take pictures inside the material at a nanoscale within a few microseconds to see how the material responds and adapts to the rapid deformation as it happens.”

Utilizing a straining mechanism developed at Johns Hopkins by co-author Michael Grapes and Voisin, both formerly of Johns Hopkins and currently LLNL scientists, the team pulled the small copper samples apart at a rate approaching a bullet’s impact. It was the first time the DTEM — a two-time (2008, 2013) R&D 100 award-winning Lab invention that uses pulsed electrons to analyze dynamic materials response — has been applied to analyzing mechanical deformation, according to co-author Tony Li.

“We saw an electron-transparent area get pulled apart, we saw a rearrangement of the material’s atomic structure, cracks forming and propagating — all of these microscale-deformation phenomena that up until now could not be imaged in situ at such resolution in an electron microscope,” said Li, who operated the DTEM and took the images. “This is the first time we’ve seen it at five orders of magnitude faster deformation than anybody else can at this scale.”

Researchers said seeing the first images was “a surprise,” but also a relief, because it confirmed what other experimentalists had observed postmortem in bulk materials and only previously theorized about where defects start.

LLNL’s Grapes, who started the work while a Johns Hopkins grad student, said the research will prove important for validating and improving models of the behavior of metals under extreme impacts.

“It’s the difference between looking at a sample after you’ve tested it and trying to guess what happened versus being able to see what’s happening as the deformation occurs,” Grapes explained.

“This has been a big challenge experimentally,” Voisin said about the three-year project. “(Scientists) can now probe this region of the graph in terms of time and length scale that nobody could actually see in situ before. We have proof of visibility and now we can explore many other materials.”

With the researchers successfully demonstrating copper as a model system, Voisin said, the team has already begun to examine magnesium and its alloys, a more complex metal.