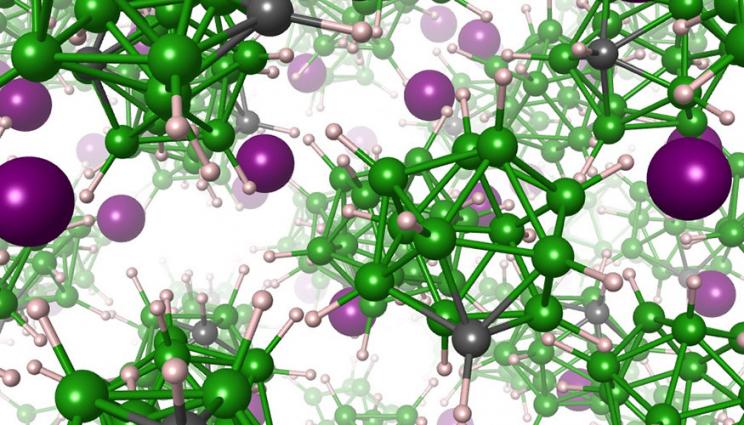 Adding carbon atoms to a new type of solid lithium ion battery could make it charge faster and more safely.

Solid-state lithium-ion batteries can provide dramatically improved safety, voltage and energy density compared with today’s batteries, which use liquid components. They could be used in electric vehicles, as well as in power electronics. However, they are still in an early stage of development, with very few commercialized to date.

In new research by an international collaboration jointly led by Lawrence Livermore National Laboratory (LLNL) scientist Brandon Wood and Mirjana Dimitrievska of the National Institute of Standards and Technology (NIST), the team discovered why substituting one boron atom for one carbon atom in a key battery electrolyte material made lithium ions move even faster, which is attractive for a more robust solid-state battery. This is an example of what scientists refer to as "frustration": the dynamics of the system ensure that lithium is never satisfied with its current position, so it’s always moving around. The research appears in the Feb. 20 edition of Advanced Energy Materials.

"Since the key functionality of electrolytes is to transport ions, it’s a nice finding," Wood said.

One of the key obstacles is the small number of candidate solid electrolyte materials that can shuttle lithium ions efficiently between the battery terminals. In an ordinary battery, this is easily done through a liquid, but solid materials that can do this are extremely rare. Some of the available materials have stability issues. Others are difficult to process. Most of the remaining candidates are simply too slow at moving lithium ions around, which means they must be made very thin to be effective.

The new work focuses on one material within a new class of materials, closo-borates, that was recently discovered to have fast lithium ion mobility. According to Wood, closo-borates are electrochemically stable and can be easily processed, offering some significant advantages over the competition. Although there are still some remaining barriers to commercialization -- higher thermal stability, mechanical strength and cyclability are the current focus -- this new class is an attractive potential replacement for current solid electrolytes.

"Another key advantage to closo-borates is their inherent tunability," said LLNL postdoctoral researcher Patrick Shea, who developed some of the analysis tools used in the study. "They can be readily alloyed, as well as structurally and chemically modified. In many cases, these changes can dramatically alter their behavior."

Collaborators at Sandia National Laboratories and NIST worked on modifying these materials to make them even better. They found that the substitution of one boron atom for a carbon atom makes lithium atoms move even faster.

Understanding how and why this happens requires deep modeling of mechanisms of lithium ion transport through the solid matrix, as well as detailed experimental characterization to accompany and validate the models. The team used an advanced quantum mechanical modeling technique -- ab initio molecular dynamics -- and combined it with a high-fidelity experimental technique, quasielastic neutron scattering.

The electrolyte material is a salt comprised of positively charged lithium cations and negatively charged closo-borate anions. The research showed that the closo-borate anions reorient themselves rapidly, spinning around in the solid matrix as they alternate between specific preferred directions. The addition of carbon to the closo-borate anion creates what’s known as a dipole, which repels lithium in the local vicinity of the carbon atom. As the anion spins, the carbon atom faces different directions, each time forcing lithium to move away to a nearby site in the solid matrix. Because the salt is full of spinning anions, this results in very rapid motion of lithium.

"Now that we understand the beneficial consequences, we can start to think about how to introduce similar effects by chemical modification of the anion itself," Wood said. "We also can start to think about how structure and chemistry are interrelated, which may give clues into how structural modifications of the material could generate further improvements."

Joel Varley, an LLNL materials scientist and co-author on the paper, added: "It’s an early step toward developing a new class of robust solid electrolytes with ultra-high lithium ion mobility, offering an attractive alternative for current solid-state battery designs. The general design principle also may be useful for optimizing other solid electrolyte materials where molecular rotations play a role."

In addition to Wood, Shea and Varley, LLNL researcher Kyoung Kweon also contributed to the study. Other collaborators include the University of Antwerp in Belgium and the Ural Division of the Russian Academy of Sciences.

The research was funded by the Laboratory Directed Research and Development program.