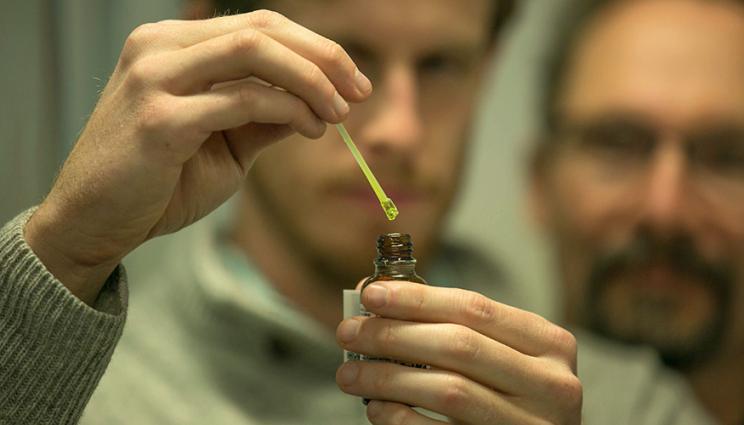 Advanced 3D printing promises to redefine manufacturing in critical industries such as aerospace, transportation and defense, and now, Lawrence Livermore National Laboratory is exploring the use of 3D printing to achieve unprecedented flexibility in producing "on-demand" targets for testing how materials behave under extreme conditions.

Through an additive manufacturing process called two-photon polymerization direct laser writing (2PP DLW), a team of LLNL researchers led by Juergen Biener has fabricated the first millimeter-sized, low-density foam reservoir targets with nanoscale features for material strength tests at the OMEGA laser in Rochester, New York. They are the first group to make precision macroscopic parts using the process. The research on Omega began to allow transferring the same technology to shots on the National Ignition Facility (NIF), where similar components are needed to improve the performance of future targets.

With the freedom to build in 3D space, LLNL postdoc James Oakdale has been able to fabricate these polymer foam target components in a matter of hours, instead of the weeks typically needed for traditional processes. The improved control over fabrication means researchers also can easily change the material’s properties, such as density, elasticity and brittleness, from one build to the next.

"When something in target fabrication goes wrong, it could take us two months to replace it," Biener said. "Now we can do it the next day or even overnight. The advantage is a shortcut in the time it takes to develop a new target component from conception to delivery. It opens the door to making things you couldn’t make before using traditional manufacturing."

Material strength tests with high-powered laser systems such as OMEGA or at NIF are used to validate existing computer models of material behavior under intense pressure. Biener said the 2PP DLW technique also can be used to develop material libraries for high throughput "shotgun experiments" where each library consists of hundreds of materials, each one slightly different in feature size and other properties.

The "on-demand" capability of 3D printing is attractive for NIF, according to LLNL Targets S&T group leader Michael Stadermann, and also could reduce lead times for future experiments.

While there are limits on which materials can be used as inks, Stadermann said researchers are beginning to see the potential for faster, cheaper and more reproducible fabrication methods not possible through traditional manufacturing.

"It’s easier to control what you’re testing, and you don’t have to do any machining after," Stadermann said. "Being able to write something in the final shape you want is a real advantage, especially since many of the materials cannot be machined."

Ultimately, researchers might see a cost benefit by using 3D printing for target production, Stadermann said. In the near term, researchers hope the greater flexibility and responsiveness only achievable through 3D printing can help them meet the demands of new physics.