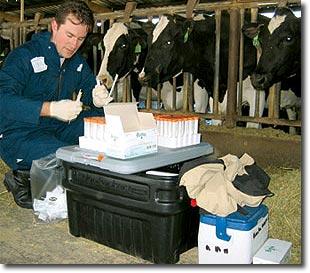 To test LLNL’s multiplexed assay, analytical chemist Ben Hindson (above) collected samples at a dairy farm near Davis, Calif., and veterinarian Pam Hullinger collected them at the animal science facilities of the University of California at Davis. 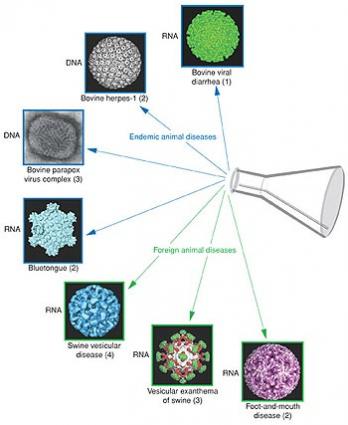 The Livermore assay tests for three foreign animal diseases (green border) and four endemic diseases (blue border). Electron micrographs of each virus are shown. Numbers in parentheses denote the number of signatures the assay uses to detect each disease. 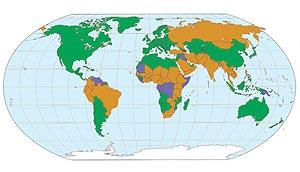 Foot-and-mouth disease (FMD) is endemic in many parts of the world. In this map, brown indicates countries that reported FMD occurrences in 2004, green shows those with no reported occurrences, and purple denotes those for which data are incomplete or unavailable. (Data from the World Organisation for Animal Health.)

LIVERMORE, Calif. — Lawrence Livermore National Laboratory (LLNL) scientists, in partnership with the federal Homeland Security and Agriculture departments and the University of California, Davis, have developed a rapid diagnostic test that simultaneously tests for foot-and-mouth disease and six other look-alike diseases in livestock.

The new candidate test, which is still undergoing the process of validation, reduces the period for diagnosing all seven diseases from days to hours, and could significantly reduce costs.

In addition to the test, team researchers have made two other important advances – in testing samples and tracking samples – that could provide a major boost in routine agricultural disease surveillance and fighting any instances of agroterrorism.

The U.S. Department of Homeland Security (DHS) has funded the efforts to develop high-throughput multiplexed assays for early detection of foreign animal diseases, such as foot-and-mouth disease.

"The test provides a tool that could be used for surveillance, which would significantly enhance the nation’s capacity for early detection of foot-and-mouth disease (FMD)," said LLNL veterinarian and team member Pam Hullinger. "Finding the first case of FMD as soon as possible is critical to minimizing the scope and impact of an outbreak."

One estimate is that the U.S. would lose up to $3 million in direct costs for every hour’s delay in diagnosing FMD.

Barbara Martin, the NAHLN coordinator for the USDA, also stresses how the test or assay, once it is deployed to the NAHLN, would assist detection.

"With an assay capable of detecting a foreign animal disease, we’ll be able to detect it early, and reduce the spread and the economic impact of the disease," Martin said.

Once approved, with the multiplex assay NAHLN laboratories could test for all seven diseases at the same time – within about five hours.

The concept of an assay that could test for multiple livestock diseases grew out of the 2001 outbreak of FMD in the United Kingdom that caused about $5 billion in losses to the food and agriculture sector and even greater losses in tourism. Up to 10 million sheep, pigs and cows were slaughtered, and for several months, the nation was banned from exporting livestock and animal products that could potentially transmit the virus.

"What the U.S. veterinarians who went to England really wanted was a test for confirming FMD with a quick turnaround, so they could make a decision on how to handle the individual farms," said Alex Ardans, director of the UC Davis-operated California Animal Health and Food Safety Laboratory System.

UC Davis researchers helped to provide vision and key direction for the assay’s development and also provided samples of domestic livestock viruses, which were important in the development of the multiplex assay.

The assay screens for both DNA and RNA viruses at the same time and uses 17 signatures – unique regions of DNA or RNA – to assist in detecting FMD and the six other diseases that resemble FMD.

Three of these are the foreign diseases FMD, vesicular exanthema of swine and swine vesicular disease. Four are the endemic diseases bovine viral diarrhea, bluetongue, bovine herpes-1 and the parapox virus complex.

Initial studies to determine the performance characteristics of the assay are being performed at LLNL, DHS’ Plum Island Animal Disease Center, NVSL and within the NAHLN. For the work, Plum Island provided scientific expertise, vision, viral isolates and lab space. Development work is continuing at LLNL and Plum Island.

FMD is an extremely contagious viral disease of cattle, pigs, sheep, goats, deer and water buffalo. Animals afflicted with FMD usually do not die, but the disease is debilitating and animals do not recover. The vaccine for FMD only reduces the severity of symptoms; it does not prevent infection or completely stop transmission of the disease.

"The availability of a validated, rapid test for detecting FMD and differentiating it from other diseases that present similar clinical signs would be invaluable," said LLNL analytical chemist and team member Ben Hindson.

As part of its validation process, the assay has been sent to 13 NAHLN labs and the USDA Foreign Animal Disease Diagnostic Laboratory, which participated in an interlaboratory comparison and will be performing follow-on evaluations of the test. In the months to come, the USDA’s Animal and Plant Health Inspection Service will determine how the assay will be used.

For the assay, one other important collaborator has been Canada’s National Center for Foreign Animal Diseases based in Winnipeg. The National Center provided research space and access to its extensive library of samples from FMD-infected animals. It has also assisted with the development of other assays.

Beyond the assay, the interagency team also has developed a high-throughput, semi-automated system that permits the analysis of 1,000 animal specimen samples within a 10-hour period using two robotic workstations and two technicians.

This platform increases the normal sample processing capacity by about 10-fold per day.

"Timely and scalable diagnostic surge capacity is a critical component of any animal health emergency response," Ardans noted, adding that with more workstations and technicians many more samples could be processed.

One added benefit of the team’s new high-throughput capacity is that the platform is adaptable for use with other assays, including those that test for human diseases, and hence could contribute to any public health system response.

The other important advance is the integration with USDA’s information technology system for tracking animal samples that has been developed by the federal department between 2003 and 2006.

The goal is for veterinarians or animal health officials to be able to take and track a sample from an animal all the way through the process – from the animal to the lab to the diagnostic test and to the transmission of the results," said USDA’s Martin.

With this capability, the sample could be rapidly traced back to the herd of origin and the affected animal, thus minimizing the risk of the disease’s spread, according to Martin.

The USDA is using a standardized sample tracking and reporting process with bar codes to identify each sample and relies on a secure network to transmit information to laboratories in the NAHLN system.