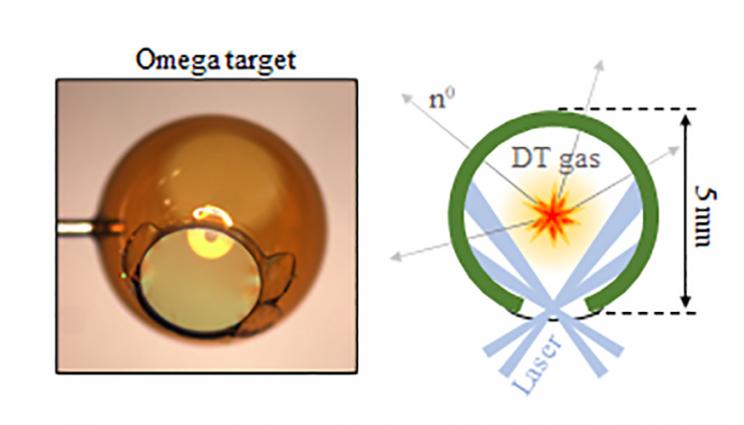 In the inverted-corona platform, laser beams are pointed onto the inside walls via laser entrance holes. Graphic provided by Matthias Hohenberger.

The National Ignition Facility (NIF) at Lawrence Livermore National Laboratory (LLNL) has added a new tool to its growing list of capabilities.

A team of scientists has demonstrated a new geometry for a neutron source platform for NIF, called the inverted-corona platform, which does not rely on spherically symmetric laser irradiation.

This new tool has significantly less-stringent laser-symmetry requirements than conventional laser driven neutron sources on NIF. In this technique, laser energy is used to heat the inner surface of a millimeter-scale capsule. The wall material expands and launches a centrally stagnating shock into the gas fill to heat the gas to fusion conditions.

“This platform has relevance to applications in effects testing or forensics,” said Matthias Hohenberger, LLNL staff scientist. “We have an experiment scheduled in 2022 for exploring applications as a neutron backlighter, and as a neutron source for nuclear-cross-section measurements with sample materials attached to the outside of the capsule.”

Hohenberger said there are other potential applications in basic science, and is one-of-a-kind in its geometry flexibility. “It also represents a challenging problem to simulate because of the relatively low plasma density,” he said. “So we’re using it to test mix models in state-of-the-art simulation codes, and to train junior scientists.”

The work, highlighted in a paper in Review of Scientific Instruments, presents a novel neutron-source platform for NIF. Typically, NIF neutron platforms are based on the spherical compression of a capsule filled with deuterium and tritium (DT) fuel, thus achieving the pressures and temperatures necessary for the DT to undergo fusion reactions. This is achieved using either indirect-drive intertial confinement fusion (ICF) platforms or directly-driven exploding pushers. In these platforms, the incident laser results in a pushing action from the outside of the capsule, accelerating the capsule wall inwards — either from the X-rays generated in the hohlraum, or from the laser incident on the capsule itself. That means performance is highly sensitive to drive asymmetries, as they result in an uneven push of the wall, and eventual mixing of fuel and wall material into the hot spot, said Hohenberger, who is the lead author of the paper.

“This can, and does, affect fusion performance,” he said. “It also means that the wall composition must be controlled tightly. Even small impurities in the wall, thickness variations or even surface roughness will affect the performance and neutron yield.”

Pointing lasers onto the inside of capsule wall

Hohenberger said in this new scheme, which was tested on the OMEGA laser and the NIF, the laser beams are pointed through laser entrance holes onto the inside wall of a ~5-millimeter diameter, gas-filled (D2 or DT) capsule. This causes the wall material to ablate inwards, which then launches a converging shock wave into the gas fill. The shock stagnates on center and heats the gas fill to fusion conditions (similarly to an exploding pusher). However, because the laser beams are incident onto the inside wall, the capsule wall itself is pushed outwards and away from the center, and the fusion performance is dominated by the ablatively-driven shock.

Hohenberger said this work has two key advantages. First, it decouples the wall composition from the neutron source and significantly relaxes requirements on capsule quality such as thickness uniformity, material purity and surface roughness, because the wall does not mix with the hot spot since it is pushed out rather than inwards. Second, the performance is highly insensitive to low-mode asymmetries. That means it is possible to have laser beams incident from only one side, rather than symmetrically distributed around the target, without a reduction in neutron yield.

The platform was successfully demonstrated in experiments on both the OMEGA laser and NIF. The work was funded through LLNL’s Laboratory Directed Research and Development program.

In addition to Hohenberger, co-authors include Nathan Meezan, Bob Heeter, Rick Heredia, Nino Landen, Andrew MacKinnon and Warren Hsing from LLNL; Will Riedel and Mark Cappelli from Stanford University; Neel Kabadi and Richard Petrasso from Massachusetts Institute of Technology; Chad Forrest from the Laboratory for Energetics at the University of Rochester; Loosineh Aghaian, Mike Farrell and Claudia Shuldberg from General Atomics; and Franziska Treffert and Siegfried Glenzer from SLAC National Accelerator Laboratory.