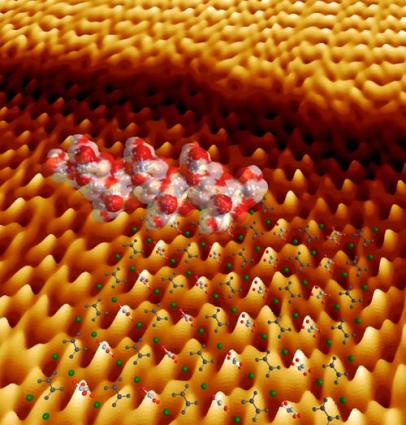 Aspartic acid-rich peptides are adsorbed on a calcium oxalate monohydrate (COM) crystal surface. Models of a peptide and COM crystal structure are overlain on an Atomic Force Microscope (AFM) image collected during growth of the face of COM. The rendered AFM image reveals the molecular structure of the crystal surface, including individual kink-sites along a single atomic step. The high peaks show the individual oxalate groups and the dimension along the bottom edge of the image is 60 angstroms.

By producing some of the highest resolution images of peptides attaching to mineral surfaces, scientists have a deeper understanding of how biomolecules manipulate the shape of growing crystals.

The research, which appears in a recent edition of the journal Proceedings of the National Academy of Science s, explores how peptides interact with mineral surfaces by accelerating, switching and inhibiting their growth.

The team, made up of researchers from the Laboratory, the Molecular Foundry at Lawrence Berkeley, the University of California, Davis and the University of Alabama, for the first time produced single-molecule resolution images of this peptide-mineral interaction.

Inorganic minerals play an important role in most biological organisms. Bone, teeth, protective shells or the intricate cell walls of marine diatoms are some displays of biomineralization, where living organisms form structures using inorganic material. Some minerals also can have negative effects on an organism, such as in kidney and gallstones, which lead to severe suffering and internal damage in humans and other mammals.

Understanding how organisms limit the growth of pathological inorganic minerals is important in developing new treatment strategies. But deciphering the complex pathways that organisms use to create strong and versatile structures from relatively simple materials is no easy feat. To better understand the process, scientists attempt to mimic them in the laboratory.

By improving the resolution power of an Atomic Force Microscope (AFM), the PNAS authors were able to image individual atomic layers of the crystal interacting with small protein fragments, or peptides, as they fell on the surface of the crystal.

"Imaging biomolecules that are weakly attached to a surface, while simultaneously achieving single-molecule resolution, is normally difficult to do without knocking the molecules off," said Raymond Friddle, an LLNL postdoctoral fellow.

But the team improved upon previous methods and achieved unprecedented resolution of the molecular structure of the crystal surface during the dynamic interaction of each growing layer with peptides. "We were able to watch peptides adhere to the surface, temporarily slow down a layer of the growing crystal, and surprisingly 'hop' to the next level of the crystal surface," Friddle said.

The images also revealed a mechanism that molecules can use to bind to surfaces that would normally repel them. The high resolution images showed that peptides will cluster together on crystal faces that present the same electrical charge. Under certain conditions, the peptides would slow down growth, while under other conditions the peptides could speed up growth.

But when the researchers slowed down the crystal growth rate, the peptides collapsed onto the surface so strongly that they completely stopped growth. The researchers proposed that the phenomenon is due to the unique properties of bio-polymers, such as peptides or polyelectrolytes, which fluctuate in solution before resting in a stable configuration on a surface.

"The results of the catastrophic drop in growth by peptides suggest ways that organisms achieve protection against pathological mineralization," said Jim De Yoreo, the project lead and deputy director of research at LBNL's Molecular Foundry. "Once growth is halted, a very high concentration of the mineral will be needed before growth can again reach significant levels."

He said designing polyelectrolyte modifiers in which the charge, size and ability to repel water can be systematically varied would allow researchers to create the equivalent of "switches, throttles and brakes" for directing crystallization.