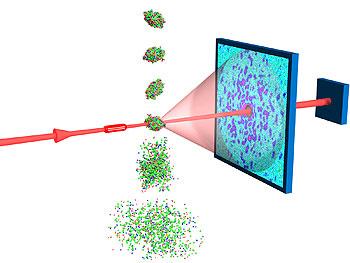 Single-molecule diffractive imaging with an X-ray free-electronlaser. Individual biological molecules will be made to fall through the X-ray beam, one at a time, and their structural information recorded in the form of a diffraction pattern. The pulse will ultimately destroy each molecule, but not before the pulse has diffracted from the undamaged structure. The patterns are combined to form an atomic-resolution image of the molecule. 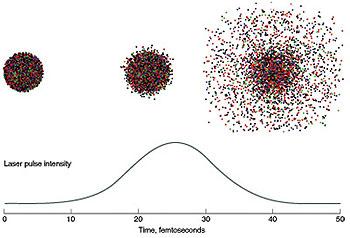 Atom trajectories computed by a hydrodynamic model show a 2-nanometer protein exploding after it is hit by a 20-femtosecond, 12-kiloelectronvolt x-ray pulse that is 0.1 micrometer wide. Models indicate that atomic-resolution imaging can be achieved with pulses shorter than 20 femtoseconds. They also show that a water tamper on the protein slows its destruction so that longer pulses could be used.

LIVERMORE, Calif. — Lawrence Livermore National Laboratory (LLNL) scientists for the first time have validated the idea of using extremely short and intense X-ray pulses to capture images of objects such as proteins before the X-rays destroy the sample.

At the same time, the team also established a speed record of 25 femtoseconds for flash imaging.

The new method will be applicable to atomic-resolution imaging of complex biomolecules when even more powerful X-ray lasers, currently under construction, are available. The technique will allow scientists to gain insight into the fields of materials science, plasma physics, biology and medicine.

Using the free-electron laser at Deutsches Elektronen-Synchrotron (DESY) in Hamburg, Livermore scientists, as part of an international collaboration led by LLNL’s Henry Chapman and Janos Hajdu of Uppsala University, were able to record a single diffraction pattern of a nanostructured object before the laser destroyed the sample. A Livermore-developed computer algorithm was then used to recreate an image of the object based on the recorded diffraction pattern. This "lensless" imaging technique could be applied to atomic-resolution imaging because it is not limited by the need to build a high-resolution lens.  The flash images could resolve features 50 nanometers in size, which is about 10 times smaller than what is achievable with an optical microscope.

Theory predicts that a single diffraction pattern may be recorded from a large macromolecule, a virus or a cell with an ultra-short and extremely bright X-ray pulse before the sample explodes and turns into a plasma. This means that scientists could better understand the structure of macromolecular proteins without crystallizing them and thus allow rapid study of all classes of proteins.

Computer simulations based on four different models suggest that a near-atomic resolution structure could be achieved by well-thought out choice of pulse length and intensity of X-ray wavelength before the sample is stripped of its electrons and is destroyed.  However, up until now, there had been no experimental verification of the technique.

The experimental demonstration of "flash diffractive imaging" uses the first soft X-ray FEL (free electron laser) in the world located at the FLASH facility at DESY. FLASH generates high-power soft X-ray pulses by the principle of self-amplification of spontaneous emission. The pulses are 10 million times brighter than today’s brightest X-ray sources, synchrotrons. In addition, this experiment showed that it only takes a 25-femtosecond pulse duration to capture the image.

There has been a question whether the diffraction pattern recorded under these circumstances could be reconstructed to obtain undamaged sample information.

"These results could become a standardized method," Chapman said. "This imaging could be applied at the cellular, sub-cellular and down on to single molecule scale."

The work was funded by a Laboratory Directed Research and Development strategic initiative proposal for "biological imaging with fourth-generation light sources."

This research was funded in part by the National Science Foundation’s Center for Biophotonics Science and Technology (CBST) headquartered at the UC Davis Medical Center in Sacramento. CBST is a multi-institutional research center established in 2002 by LLNL and UC Davis researchers and is dedicated to the development and application of photonic instrumentation and methods to address important problems in the biomedical technology sector.