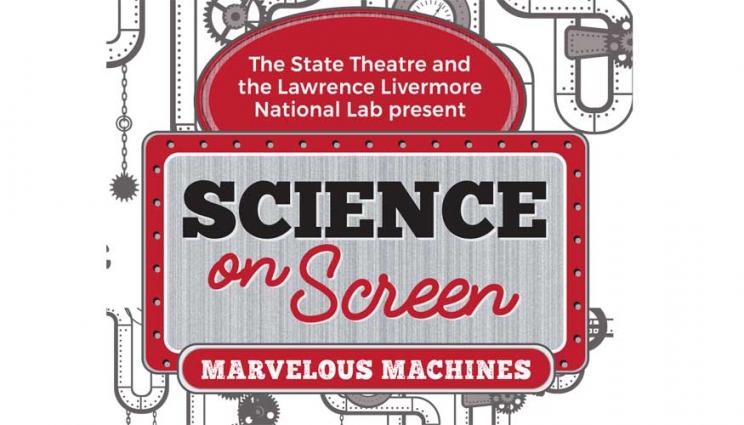 LIVERMORE, California – Now in its fourth year, Lawrence Livermore National Laboratory (LLNL) is once again partnering with The State Theatre in Modesto to bring "Science on Screen" to the theater two Saturdays a month in March and April. The 2018 theme of the series is "Marvelous Machines."

Science on Screen is a free educational program geared to middle, high school and college students that creatively pairs cutting-edge science by leading LLNL researchers with a feature film on a similar subject matter, providing the perfect combination of enlightenment and entertainment. Students may receive extra credit for attending and a $500 prize will be awarded to the classroom with the most students attending over the four programs.

The series will be held at The State Theatre, 1307 J. St. in Modesto, and will kick off Saturday, March 10, with LLNL scientist Felicie Albert discussing "Laser-Plasma Accelerators: Riding the Wave to the Next Generation X-Ray Light Sources." Find out how particle accelerators are revolutionizing discoveries in science, medicine, industry and national security. This lecture is appropriately paired with the 1985 movie "Real Genius."

Doors will open at 2 p.m. with the lecture beginning at 2:30 p.m. New this year is "meet a scientist," providing an opportunity to talk with the featured speaker following their presentation at 3:15 p.m. The feature-length film will follow the at 3:30 p.m. Seating is on a first-come basis. There is no pre-registration.

Science on Screen is funded by a grant through the Alfred P. Sloan Foundation and the Coolidge Corner Theatre. The privately funded, nonprofit State Theatre is partnering with LLNL’s University Relations and Science Education Program for the fourth year, to provide the science-based content highlighting LLNL’s cutting-edge research. This partnership hopes to inspire and engage students in science, technology, engineering and math (STEM) education.