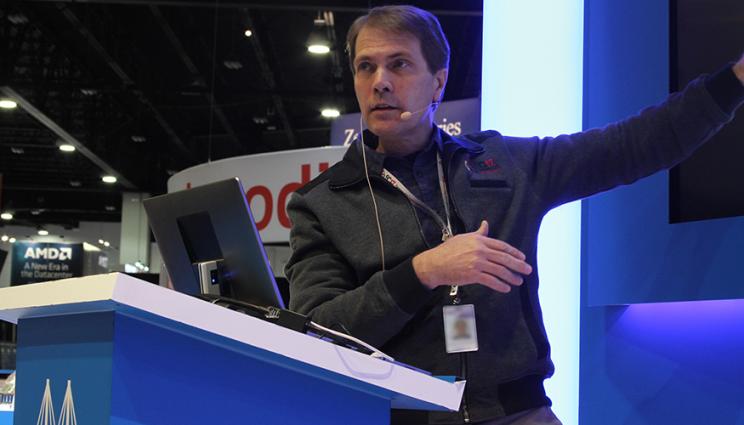 LLNL’s Chief Technology Officer for Livermore Computing Bronis de Supinski spoke at the Mellanox booth on Nov. 16 about Sierra, the Lab’s next advanced technology system. Sierra, the Lab’s first heterogenous system -- comprised of CPUs and GPUs -- is projected to be up to seven times more powerful than Sequoia when it is accepted in 2018.

The 2017 SuperComputing Conference (SC17), the world’s largest gathering of scientists, researchers and vendors in high-performance computing (HPC), descended on Denver last week, as nearly 13,000 people crammed the Colorado Convention Center over six days to learn about and discuss the latest advances in HPC, artificial intelligence (AI) and machine learning.

A hot topic at the 29th annual international conference was Sierra, Lawrence Livermore National Laboratory’s (LLNL) next advanced technology supercomputer. Sierra is the Lab’s first "heterogenous" system, composed of both central processors (CPUs) and graphical processors (GPUs). When fully installed and accepted early next year, Sierra will be Livermore’s fastest and most powerful supercomputer, projected to provide up to seven times the performance of Sequoia, LLNL’s current leader in speed. Sequoia took sixth place in the Top500 list of the world’s fastest computers, announced at the conference on Nov. 13.

The exhibition floor set a conference record for space and number of exhibitors. Bronis de Supinski, chief technical officer of LIvermore Computing, spoke at the NVIDIA and Mellanox booths -- two vendors the Lab is partnering with on Sierra -- about the progress and promise of the machine. The head of LLNL’s Advanced Technology Office, de Supinski presented the system’s technical specifications, spoke of how the GPUs would factor into Sierra’s performance, and explained how the system’s design evolved due to the recent memory pricing surge.

"We realized we could cut the memory in half and not affect the performance of the machine," de Supinski said. "If I were to design a machine today, I would get the machine we’re getting…For the way we’re going to be using this system, this was the best choice for us."

The preparation for Sierra also was highlighted in Rob Neely’s talk at the Department of Energy’s (DOE) booth on Nov. 16. LLNL’s WSC program coordinator for Computing and Programming Environments, Neely focused on efforts to prepare Livermore’s existing codes for Sierra through the Centers of Excellence (COE), a co-design strategy that has brought IBM and NVIDIA employees together with Lab computer scientists and code developers, who are porting applications using an early access system with similar technology.

Neely said he was optimistic about the transition to Sierra, which has presented challenges to Lab programmers with its unique architecture.

"Sierra presents a major shift for our applications at Livermore," Neely said. "I don’t think we could have done a more about-face from the BlueGene strategy of homogenous low-power cores when we chose the GPU-based Sierra system as a path to the future. We wanted to make the jump to heterogenous, we knew it would require a lot of work, and that’s how the idea for the Center of Excellence started…We had a lot of runway, but we’re ready to take off." 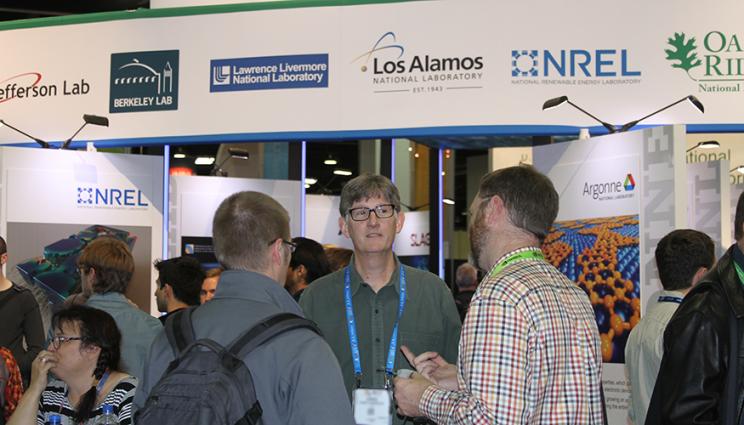 HPC-related outlets rained accolades on Lab researchers on Nov. 14. The publication HPCwire handed out Editor’s Choice awards for the Best Use of artificial intelligence for CANDLE (CANcer Distributed Learning Environment), and the Best Use of HPC in Manufacturing for an HPC4Mfg project aimed at discovering energy-saving ways to make paper. Hyperion Research also presented an HPC Innovation Award (selected by the HPC User Forum steering committee) to another HPC4Mfg project, a collaboration with Procter & Gamble. The project resulted in much faster and more detailed simulations of the meshing of paper fibers, part of the pre-processing modeling stage that can be a major bottleneck in the paper design process.

The SC17 Awards were handed out on Nov. 16, where the 2017 ACM Gordon Bell Prize went to a team of Chinese researchers who were able to efficiently create 3D visualizations of an earthquake that hit China in 1976, which could impact future earthquake simulation and prediction. Finalists for the Best Paper award included LLNL computer scientists Chunhua Liao, Pei-Hung Lin, Joshua Asplund, Markus Schordan and Ian Karlin for their work on DataRaceBench, a benchmark suite designed to systematically and quantitatively evaluate the effectiveness of data race detection tools. LLNL’s Tapasya Patki, Dong Ahn, Don Lipari, Tamara Dahlgren and David Domyancic were authors on a Best Poster finalist for their work on a fully hierarchical scheduling model for exascale workloads.

As is the case every year, SC17 was packed with workshops, presentations and tutorials on all things HPC, many of them led by LLNL researchers. Among the highlights: computer scientist Todd Gamblin and team guided attendees through a tutorial for Spack, an open-source package manager for high-performance computers; software developer Elsa Gonsiorowski was a panel member at a daylong workshop for women in HPC; computer scientists Cyrus Harrison and Kevin Griffin led a tutorial on VisIT, an open-source visualization, animation and analysis tool; Alfredo Gimenez and team presented ScrubJay, a scalable framework for automatic analysis of disparate HPC data; and computer scientist Peter Lindstrom helped lead a tutorial on large-scale data compression. Numerous other Lab employees presented papers and posters, participated in birds-of-a-feather sessions, and assisted in job fair and recruiting efforts.

The conference’s keynote speech was given by Philip Diamond, director general of the international Square Kilometer Array project, an international collaboration to build the world’s largest radio telescope. The HPC Connects Opening Plenary, "The Century of the City," examined the potential of high-performance computing in "smart cities," where data collected from sensors dispersed throughout urban areas could improve traffic flow, pedestrian safety, energy efficiency and police and medical response.

The total attendance for SC17 was 12,753, falling just shy of the record set in 2015. Next year’s conference, the event’s 30th anniversary, will be held in Dallas.

For a full list of LLNL contributions to SC17, visit the event calendar.  For further information on the conference, visit the web.