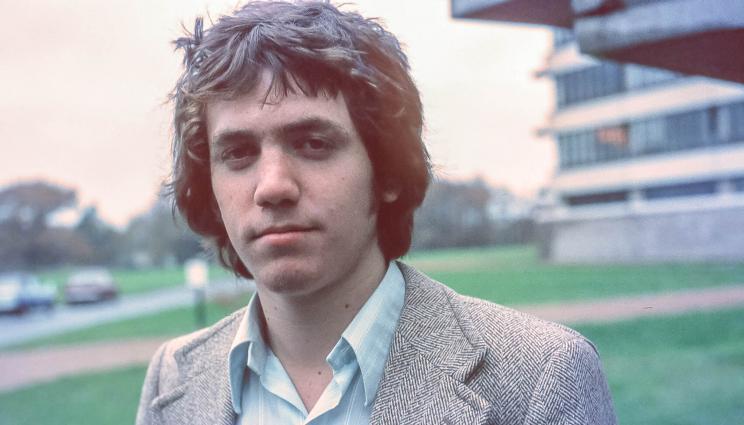 Benjamin Santer in 1973 at the University of East Anglia, where he started his undergraduate degree in environmental science.

"Lord of the Rings" and "Titanic" actor Bernard Hill, "Apple Tree Yard" author Louise Doughty and Virgin Money CEO Dame Jayne-Anne Gadhia are among those who will be awarded this summer.

Honorary degrees are awarded annually to acknowledge individuals for outstanding accomplishments in their field or for exceptional contributions to the community. Santer will receive an honorary doctorate of science degree. In total, 20 recipients will be awarded with honorary degrees at the UEA’s graduation ceremonies between July 16-20.

"I have never received an honorary degree and was the first in my family to attend college, so all of this is deeply humbling," Santer said. "It also is deeply gratifying that I will have the opportunity to see many old friends from my time as a student at UEA. That ‘award’ is equally special."

Santer is internationally renowned for his work on the detection and attribution of climate change. He graduated from UEA with a 1st in 1976 and has since received accolades ranging from membership of the U.S. National Academy of Sciences to the World Meteorological Organization’s Norbert Gerbier Award. Most recently, Santer received the 2019 Sigma Xi William Procter Prize for Scientific Achievement.

He also is the lead author of a key chapter in the 1995 Intergovernmental Panel on Climate Change (IPCC) Report. This chapter reported a ‘discernible human influence on global climate,’ a finding now accepted by virtually all climate scientists.

His advice for graduates is: "To quote from ‘Thinking Without Borders’ on the UEA website: ‘words have the power to change the world.’ In 1995, I was involved with a scientific report that yielded a 12-word finding: ‘The balance of evidence suggests a discernible human influence on global climate.’ These 12 words changed the way the world views the human role in the climate system. So never forget the power of language, and never forget the power and beauty of science."

Santer is a UEA graduate and started his undergraduate degree in environmental science in 1973. He took geophysics classes with Fred Vine, learning chemical oceanography from Peter Liss and receiving an introduction to geochemistry from Joe Cann.

"At a time when few British universities offered environmental science courses, UEA gave me a solid grounding in interdisciplinary earth systems science," Santer said. "In retrospect, this was exactly the training I would require in my subsequent professional career."

In 1983, UEA was the "finishing school" for Santer’s post-graduate education in climate science. At the Climatic Research Unit, he learned from some of the most creative and accomplished climate scientists on the planet.

"Tom Wigley and Phil Jones gave me the intellectual tools I needed in order to be a rigorous, independent research scientist," he said. "They also communicated their own passion for scientific discovery and for understanding the size, rate and significance of human-caused planetary warming."

Santer joined Lawrence Livermore in 1992 after working for five years at the Max-Planck Institute for Meteorology in Germany.

In his career, Santer has visited many universities in Europe and the United States. "These visits provided me with a window into the education students receive at other academic institutions," he said. "Based on this perspective, I am convinced that I obtained the best possible undergraduate and graduate education at UEA. If I had a ‘do over,’ I would make exactly the same educational choices I made in 1973 and in 1983."