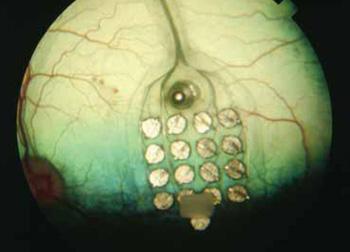 Retinal prosthesis LLNL helped develop is approved by the FDA

The U.S. Department of Energy announced Thursday that its support for a decade of revolutionary research has contributed to the creation of the first ever retinal prosthesis -- or bionic eye -- to be approved in the United States by the U.S. Food and Drug Administration for blind individuals with end-stage retinitis pigmentosa.

LLNL engineers played a key role in the project by developing the microelectrode array for the epiretinal prosthesis.

The artificial retina, dubbed the Argus II Retinal Prosthesis System (developed and manufactured by Second Sight Medical Products Inc, Sylmar, California), may prove to be an aid to those blinded by the disease retinitis pigmentosa , which can run in families and is estimated by the National Institutes of Health to affect about 1 in 4,000 people in the United States. Over the ten year lifetime of the project, the Department provided $75.2 million for the development of technologies aimed at advancing artificial retinas like the Argus II, which was based on work by a consortium of scientists using advanced technologies developed by several of the department's national laboratories.

"The team was very passionate about this project because there is such a need for a device like this," said Satinderpall Pannu, the engineer who led the Livermore team. "While we were developing the technology, we received a lot of plaintive e-mails from people around the world who wanted to be a part of the clinical trials or who were just looking for a ray of hope for themselves or their children. It is most gratifying to see this device finally become available to the people who need it and provide them with the hope of a better tomorrow."

The Argus II can partially restore the sight of blind individuals after surgical implantation. Clinical trials demonstrated that totally blind individuals could safely use the device to successfully identify the position and approximate size of objects and detect movement of nearby objects and people.

Expertise in biomedical microsystems at Lawrence Livermore's Center for Micro and Nano Technology was tapped to develop a "flexible microelectrode array," able to conform to the curved shape of the retina, without damaging the delicate retinal tissue, and to integrate electronics developed by University of California at Santa Cruz. The device serves as the interface between an electronic imaging system and the human eye, directly stimulating neurons via thin film conducting traces and electroplated electrodes.

The LLNL team contributed three major components to the artificial retina program: the thin-film electrode array that contains the neural electrodes; the biocompatible electronics package that contains the electronics for stimulating the retina and wireless power and communications; and an ocular surgical tool that will enable the replacement of the thin-film electrode array. In addition, Lawrence Livermore was responsible for the system integration and assembly of the next generation artificial retina system.

See the DOE Website for the complete text of the announcement .