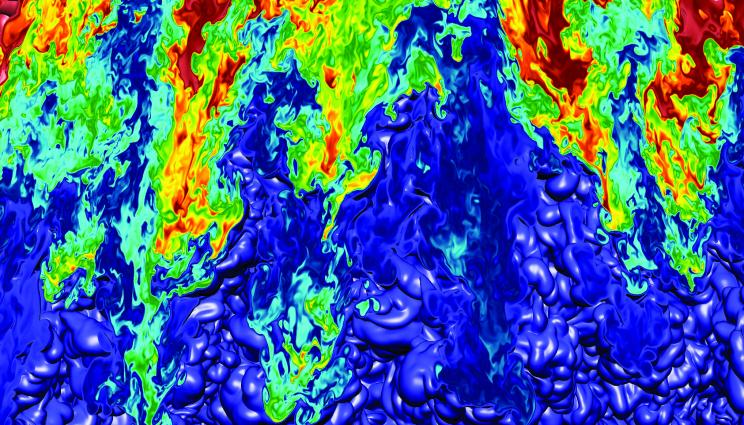 In a Proceedings of the National Academy of Sciences (PNAS) "Special Feature" paper published online June 26, Lawrence Livermore National Laboratory (LLNL) and University of Michigan researchers reported on recent experiments and techniques designed to improve understanding and control of hydrodynamic (fluid) instabilities in high energy density (HED) settings such as those that occur in inertial confinement fusion implosions on the National Ignition Facility (NIF).

This paper described four areas of HED research that focus on Rayleigh-Taylor (RT) instabilities, which arise when two fluids or plasmas of different densities are accelerated together, with the lighter (lower density) fluid pushing and accelerating the heavier (higher density) fluid.

These instabilities can degrade NIF implosion performance because they amplify target defects as well as perturbations caused by engineering features like the "tents" used to suspend the target capsule in the hohlraum and the fill tube that injects fusion fuel into the capsule.

Conversely, RT and its shock analog, the Richtmyer-Meshkov instability, are seen when stellar explosions (supernovae) eject their core material, such as titanium, iron and nickel, into interstellar space. The material penetrates through and outruns the outer envelopes of the lighter elements of silicon, oxygen, carbon, helium and hydrogen. In addition, a unique regime of HED solid-state plastic flow and hydrodynamic instabilities can occur in the dynamics of planetary formation and asteroid and meteor impacts.

The PNAS paper presents summaries of studies of a wide range of HED RT instabilities that are relevant to astrophysics, planetary science, hypervelocity impact dynamics and inertial confinement fusion (ICF).

The researchers said the studies, while aimed primarily at improving understanding of stabilization mechanisms in RT growth on NIF implosions, also offer "unique opportunities to study phenomena that typically can be found only in high-energy astrophysics, astronomy and planetary science," such as the interiors of planets and stars, the dynamics of planetary formation, supernovae, cosmic gamma-ray bursts and galactic mergers.

NIF HED experiments can generate pressures up to 100 terapascals (one billion atmospheres). These extreme conditions allow research samples to be driven, or compressed, to the kinds of pressures found in planetary interiors and the interiors of brown dwarfs (sometimes called "failed stars"). They also lend themselves to studies of RT evolution ranging from hot, dense plasmas and burning hot spots at the center of ICF implosions to relatively cool, high-pressure materials undergoing solid-state plastic flow at high strain and strain rate.

"We found that the material strength in these high-pressure, solid-state, high-strain-rate plastic flow experiments is large and can significantly reduce the RT growth rates compared with classical values," the researchers said. "These results are relevant to planetary formation dynamics at high pressures."

"An intriguing consideration," they added, "is the possibility of using these findings to enhance resistance to hydrodynamic instabilities in advanced designs of ICF capsule implosions."

"Rayleigh–Taylor instabilities in high-energy density settings on the National …