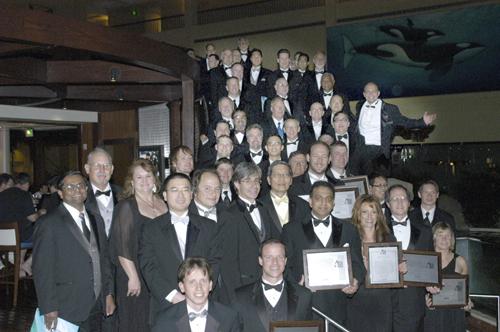 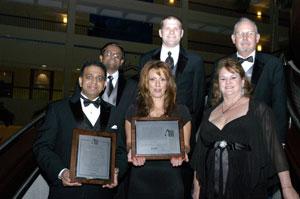 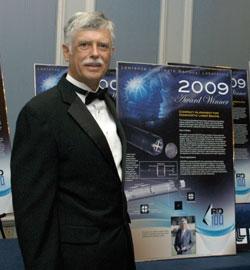 Bob Hirschfeld/NEWSLINE Mike Rushford, the principal investigator who developed the R&D 100 award-winning laser beam centering and pointing system (LBCAPS), poses in front of a poster at the LLNL exhibit.

ORLANDO, Fla. — It was a gala night of shiny tuxedos and exquisite ballgowns, as seven teams of Lawrence Livermore National Laboratory researchers — and one individual Lab scientist — stepped to the stage to receive prestigious R&D 100 awards, often dubbed the "Oscars of invention."

And at the conclusion, it was LLNL and its partners who were awarded a coveted "Editors' Award," signifying the uppermost achievement in developing new technology.

Satinderpall Pannu, team leader of the Lab's artificial retina program, received the plaque on behalf of the four other national laboratories, four universities and one industrial partner working on an implant that may one day restore sight to patients with impaired vision.

Earlier in the day, eight key executives from some of the nation's leading research institutions, including LLNL's Anantha Krishnan, director of R&D and section leader for Meso-Micro-Nano Scale Technology, met for a "CEO Roundtable" session, to discuss issues facing them, including funding and political concerns, benefits or problems related to international collaborations, partnerships between government labs, academia and private industry, approaches to dealing with climate change and the Department of Energy's handling of federal stimulus funds.

According to Krishnan, it's clear that the national labs are focusing on the convergence of national security, energy and climate. But a key concern is sustaining the national labs' funding after the stimulus money stops flowing. "It's been very helpful," he said, "but what's next?"

LLNL's Tomás Díaz de la Rubia, Science and Technology acting principal associate director, said: "Meetings like this are important for us to understand how we fit into the overall research community, and offer our expertise as well, to solve our common problems."

The closed door discussion will be summarized in an upcoming issue of R&D Magazine .

At an afternoon poster session, the award-winning teams displayed exhibits of their work, including Bryan Moran, a senior engineering associate who worked on LLNL's Spectral Sentry entry.

Moran said: "I love being able to see so many technologies outside my area of work. It's amazing what they've been able to accomplish with such things as chemistry, optics, materials and metallurgy. When I attend conferences, they're generally limited to my own field. Here, we are seeing the entire spectrum of technology at its best."

Echoing those thoughts was Paul Armstrong, the principal investigator on the Lab's Spectral Sentry, who said: "It's gratifying that people who have developed some of the world's most innovative ideas are showing interest in our work, and to have our project included with all these scientific advances."

The Lab has never received so many awards in the annual R&D 100 competition. Including this year's results, the Laboratory has now captured a total of 129 R&D 100 awards since 1978.

Although winning awards serves to recognize excellence, the next step may be just as important. Erik Stenehjem, director of the LLNL Industrial Partnerships Office said: "These R&D 100 awards are an invaluable aid in spreading the word about LLNL's expertise in advancing our nation's leadership in technology. Looking ahead, we now hope to transfer many of these award-winning projects to industrial partners."