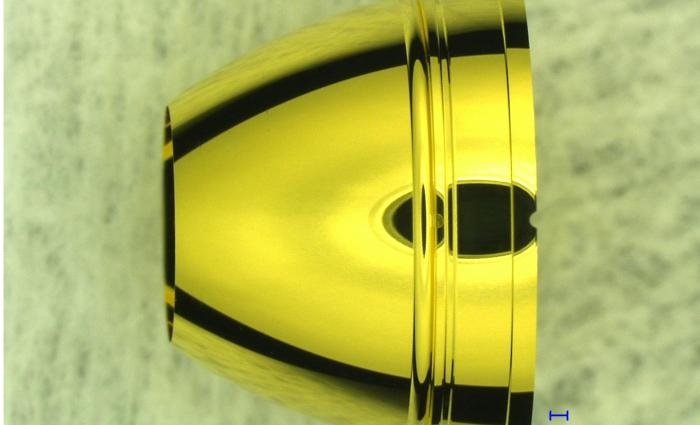 Rugby hohlraums resemble a cylinder, with the corners of the can rounded off to minimize surface area. The major sink of energy in a hohlraum is through the wall surface area, and the rugby shape helps to appreciably reduce this energy loss. Half of the hohlraum is shown here.

In this configuration, all of NIF’s 192 laser beams enter the hohlraum through a pair of laser entrance holes and deposit their energy on the gold (or depleted uranium) interior surface. The gold heats up and efficiently creates soft X-rays that bathe a centrally located plastic (CH) or high-density carbon (HDC) capsule containing hydrogen fuel. The capsule compresses the fuel to conditions that approximate those at the center of the sun for realizing energy gain from nuclear fusion.

One challenge toward achieving energy break-even and net gain is ensuring that the hohlraum be an efficient converter of laser energy into the right spectrum of X-rays for driving a round capsule implosion and achieving high fuel compression. Because the laser pulses are fairly "long" at 10-20 nanoseconds (ns), the heated hohlraum walls have sufficient time to move toward the cylindrical axis and cause the laser beams to be absorbed well away from their initial location.

The motion of these "laser spots" is detrimental for achieving a round capsule implosion, and a helium gas fill often is used to hold back the gold walls just long enough while the NIF laser is on. If the laser pulse is short enough - approximately 10 ns or less - a so-called "near vacuum hohlraum" is used to drive the capsule implosion. On the other hand, if the laser pulse is significantly longer than 10 ns, a high density gas fill (at 1.6 mg/cc) is needed to hold back the walls.

Both of these hohlraum platforms have been used with success, but some challenges toward a physical understanding remain, including capsule symmetry, laser energy reflection and missing X-ray drive energy.

Due to these challenges, other hohlraum platforms have been sought to achieve a balance of efficient and symmetric hohlraum drive. One of the candidates is a rugby football-like hohlraum shape, which resembles a cylinder with the corners of the can rounded off to minimize surface area. The major sink of energy in a hohlraum is through the wall surface area, and the rugby shape helps to appreciably reduce this energy loss.

Alternatively, the rugby shape can be used to field a larger-sized hohlraum (compared with cylinders) that helps to delay arrival of the expanding gold wall and provides more radiation smoothing of the drive X-rays at the location of the capsule. For these reasons a hohlraum with a rugby shape has gained interest as a potential additional platform for ignition studies at NIF.

In a Physics of Plasmas Letter, appearing last week, a team of LLNL researchers attempts to blend the design advantages of a rugby-shaped hohlraum with an intermediate gas-fill density for potentially optimized performance. This was chosen as a natural compromise between the two standard cylindrical hohlraum platforms (near vacuum and high gas fill) and leverages preliminary NIF experimental results in larger cylinders showing reduced laser backscatter losses and more benign implosion symmetry.

"Our letter proposes a novel ignition studies platform on the NIF using both rugby hohlraums and medium gas fills to combine the best of both worlds of the mainline cylindrical platforms with a novel shape," said lead author Peter Amendt. "Progress to date has been outstanding."

"The path to ignition is recognized as extremely challenging for any platform that is planned for testing on the NIF," said Amendt. "However, the availability of an onsite world-class facility to test new ideas makes frontier research here at LLNL the norm, not the exception."

Amendt was joined on the paper by LLNL colleagues Darwin Ho and Ogden Jones.