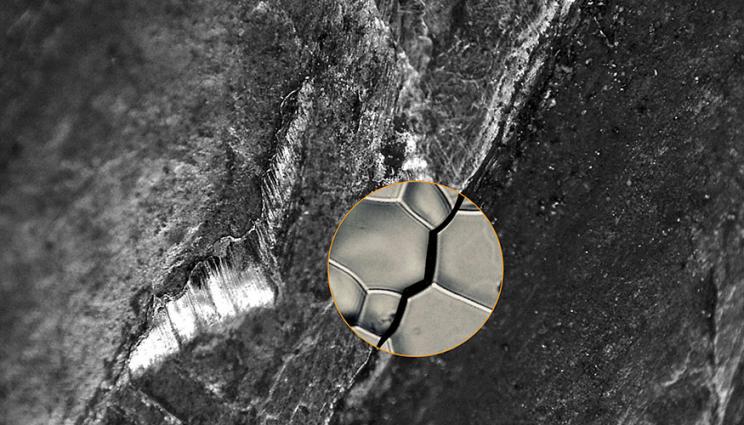 Microfractures in metal alloys, though impossible to see with the naked eye, can easily spread when exposed to water or hydrogen and lead to major problems in structures such as bridges, electrochemical and nuclear plants and hydrogen storage containers, leading to failures and expensive repairs.

In a recent study involving a Lawrence Livermore National Laboratory (LLNL) scientist, researchers at the Massachusetts Institute of Technology (MIT), Argonne National Laboratory and other institutions, scientists have, for the first time, captured 3D images of microscopic cracks in metal caused by exposure to hydrogen, also known as hydrogen embrittlement. Using the images, researchers identified 10 orientations of microscopic structures called grain boundaries that can deflect cracks and prevent damage caused by hydrogen.

The research, published by Nature Communications, relied on synchrotron-based X-ray diffraction and tomography techniques to investigate hydrogen-assisted cracks in nickel alloy. The result is a new method for analysis called 3D microstructure mapping that could aid materials processing methods aimed at blocking cracks from further propagation, strengthening metals and leading to longer lifespans for structures and components.

"It’s been a long process," said Jonathan Lind, an LLNL staff scientist who began his work on the project as a graduate student at Carnegie Mellon University. "This was a new technique that complements electron backscatter diffraction but does it in 3D. When you’re thinking about how a crack propagates, it’s inherently a 3D problem. You need to have information about that crack, its morphology and how it’s related to the microstructure. There’s a lot of information involved."

To perform the nondestructive analysis required for the project, researchers took samples of cracked nickel alloy to the Advanced Photon Source beamline at Argonne, illuminating them with high-energy x-ray beams, and using a camera to pick up diffracted and transmitted beams. By testing hundreds of thousands of orientations, analyzing millions of points and matching the data with physical models, researchers were able to turn the diffraction spots into a 3D microstructure image. The image obtained from this complicated data showed which grain boundary types can deflect cracks, indicating that "boundaries with low index plains" or BLIPS, were especially resistant to damage.

The findings, researchers concluded, could pave the way to improved predictions of the mechanical behavior of hydrogen-embrittled metals. As metal alloys are engineered, stronger grain boundaries could be promoted while detrimental ones are processed out to create more obstacles for cracks and stop them from spreading. Engineers could design microstructures to extend the life of materials, potentially saving on costs of repairs or replacement of metal components regularly exposed to water or hydrogen.

"When you have these fracture events, it inhibits the life cycle of materials," Lind said. "If you could process the microstructure with many more BLIPS, they could deflect cracks better or blunt them and you could potentially increase the life of the material significantly. In theory, that’s the idea behind grain boundary engineering."

The Department of Energy and National Science Foundation funded the research.