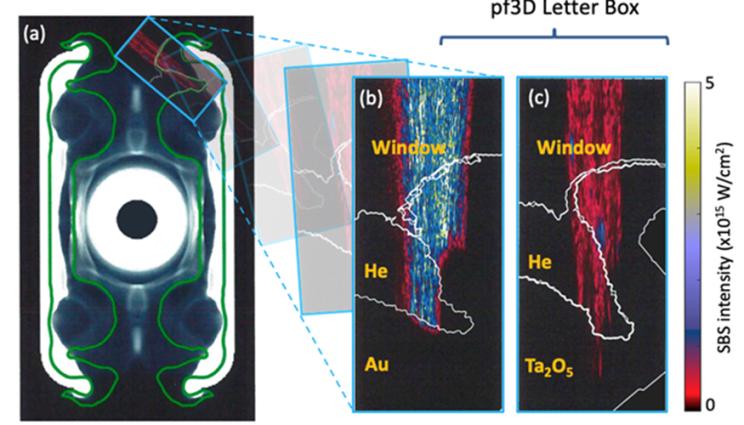 This imagine shows the reduction of stimulated Brillouin scattering backscatter at peak laser power in two laser plasma interaction (LPI) simulations.  (a) shows a hydrodynamic simulation of the hohlraum with the green outlining the wall material boundary as it expands inward. The NIF lasers enter from the top and bottom as shown.  The capsule is in the center.  (b) simulation showing bright SBS in a standard hohlraum (c) simulation showing diminished SBS (red color) when using the new Ta2O5 liner.

A major cost of running the National Ignition Facility (NIF) is managing and mitigating laser-induced damage to optics as the laser beams propagate to the target.

Another damage mechanism stems from stimulated Brillouin scattering (SBS) as light travels back from the target and with nearly the same wavelength as the incoming light. This SBS has the potential to cause additional damage to NIF optics. SBS results from the interaction between the laser light and the plasma ion acoustic wave – or sound wave.

SBS is a threshold phenomena, and the ability to simulate the “turn-on” threshold is limited.  Therefore, an expert group reviews each experiment with regard to SBS, sometimes recommending “walk-up” shots to approach the threshold at a rate that prevents significant optic damage. These shots add cost and use valuable facility time.

A paper recently published in Physics of Plasmas focuses on a single approach to controlling SBS by tailoring the target material.

“In inertial confinement fusion, we use hohlraums to trap laser light and convert it to X-rays that bathe the capsule, located in the center, causimg it to implode,” lead author Joseph Ralph said. “We need the hohlraum wall material to have a high Z (atomic number) to confine the X-rays. Typically gold or gold-lined depleted uranium are used for the hohlraum walls, but in-principle this could be any high-Z material.”

LLNL scientist Andreas Kemp, second author on the paper, conducted the simulation work described in the paper. Kemp ran a series of computer simulations with the backscatter code pF3D and compared the modeled backscatter from Ta2O5-lined versus pure gold (Au) hohlraums, using the plasma conditions provided by the standard hydrodynamics simulations of NIF hohlraums. pF3D simulations confirmed theoretical predictions. The simulations were performed before the actual experiment.

“This result is exciting because it provides us an extra tool to control potentially detrimental levels of SBS backscatter in future hohlraum experiments,” Kemp said. “It also demonstrates our ability to predict and control SBS backscatter using basic plasma physics.”

High-Z materials also produce much higher SBS than low-Z materials. This is because the heavier high-Z ions do not move as fast as low-Z ions when they get hot and so they don’t damp the acoustic wave.

“Like surfers trying to catch a wave in the ocean, the surfers need to swim with the wave in order to catch it, thereby gaining energy from the wave,” Ralph explained. “In these experiments, we used Ta2O5 as a liner. Here the hot lower Z oxygen ions damp out the acoustic wave of the higher Z Tantalum atoms. When the (lower Z) oxygen atoms heat up some of them ‘surf’ the ion acoustic wave. As the oxygen ions gain energy the wave loses energy reducing the amplitude and resulting in reduced SBS.”

The research was conducted using simulations and experiments. The simulations showed a clear reduction in SBS of the outer 50-degree beams when using Ta2O5  compared to pure gold hohlraums. Experiments conducted on the NIF using targets like those used in inertial confinement fusion showed a similar reduction in SBS. Researchers measured the SBS using drive diagnostics (DrDs) and the full aperture backscatter system (FABS). Additionally, the hohlraum wall was found to expand inward at a faster when using Ta2O5. As a result, the implosion shape was more oblate when using Ta2O5. While this is not ideal, there are techniques such as crossed beam energy transfer and target geometries such the I-Raum that can help mitigate the shape.

“These results show promise for controlling SBS in future experiments especially as we increase the laser power and energy,” Ralph said.