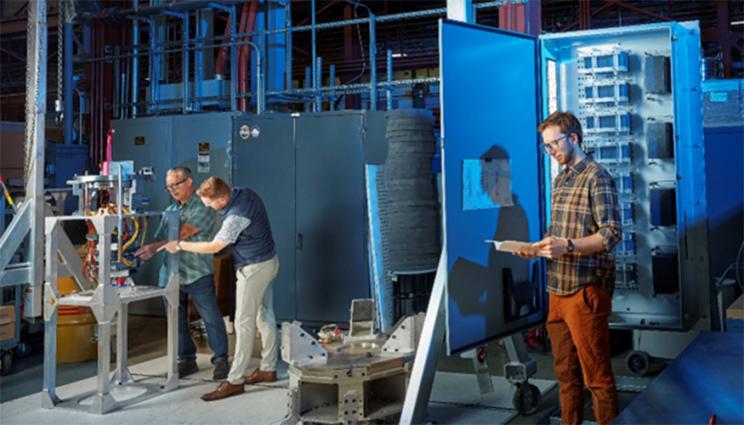 Miramar is a major milestone toward the Nimble experiment series, which will play a key role in assessing the safety, security and effectiveness of the U.S. nuclear stockpile, as well as providing data crucial to certifying that modernized warheads will perform as expected.

A multi-institutional team of researchers and collaborators successfully executed an integrated vessel confinement system (VCS) experiment at Lawrence Livermore National Laboratory (LLNL), as part of an experimental campaign to study how nuclear materials react to high explosives without conducting a traditional nuclear test.

The experiment — dubbed Miramar — was an extensive collaboration across LLNL, Los Alamos National Laboratory (LANL), the United Kingdom’s Atomic Weapons Establishment (AWE) and the Nevada National Security Site (NNSS). It is a major milestone in an upcoming subcritical experiment series, named “Nimble.” The Nimble series is designed to remain below the threshold of nuclear criticality in accordance with the U.S. commitment not to return to nuclear explosive testing. The Nimble series will play a key role in assessing the safety, security and effectiveness of the U.S. nuclear stockpile, as well as providing data crucial to certifying that modernized warheads will perform as expected.

Miramar is the penultimate dress rehearsal experiment leading up to the Nimble series at NNSS’s underground U1a facility in Nevada. The experiment will help ensure that there will not be vessel confinement or data-return surprises when the Nimble experiments are conducted in U1a. This was a fully integrated test, meaning that all components of the vessel and confinement system were in place, as well as diagnostic and experimental components, using relevant materials.

“Miramar is what is known as a vessel mitigation experiment,” said LLNL design physicist Fady Najjar, who helped spearhead the experiment. “The main goal was to prove that the mitigation system design will protect the integrity of the confinement vessel from debris and damage, and that diagnostics will perform as expected.”

Miramar consisted of multiple experiments detonated within a fully enclosed steel vessel. The team also leveraged this experimental opportunity to collect hydrodynamic physics data from novel diagnostics intended for upcoming subcritical experiments to measure the momentum of the detonation.

“Demonstration of the recently implemented novel diagnostic to measure areal mass, developed collaboratively by NNSS and LLNL, was a major accomplishment and testament to the innovative and responsive nature of our scientific collaboration,” said Ed Daykin, project experimental physicist. “Preliminary results indicate high-quality data return and successful execution of all experimental packages within the vessel.”

Miramar operations and data collection included: design and assembly of a test area at LLNL’s remote experimental test site at Site 300 to simulate the U1a facility, implementation of the intended VCS blast mitigation design, as well as assembly and demonstration of the timing and firing system. The experiment included extensive velocimetry and ranging, temperature and vessel diagnostics.

“In addition to being a final proof-test of a novel diagnostic developed under a very tight timeline, Miramar provided valuable physics validation data that give us further confidence in our final designs for the Nimble subcritical experiment packages,” said Garry Maskaly, design physicist. “The hard work of the team will help ensure that we obtain the highest quality data in future experiments, enabling us to best support future stockpile modernization programs.”

“Completion of this experiment provides the information and confidence necessary to move forward with upcoming activities and experiments in the Nimble series,” Najjar said. “Overall, Miramar was a very successful experiment with excellent data return and allowed the team to evaluate and verify procedures in preparation for fielding and execution of the subcritical experiments at U1a.”