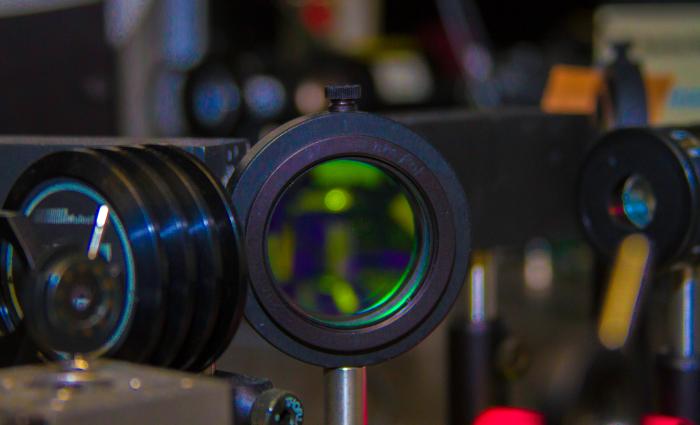 Laser wakefield acceleration, a process where electron acceleration is driven by high-powered lasers, is well-known for being able to produce high-energy beams of electrons in tabletop-scale distances. However, in recent experiments, a team of scientists from Lawrence Livermore National Laboratory (LLNL) and the University of California, Los Angeles (UCLA) revealed new, never-before-seen electron ring formations in addition to the typically observed beams.

In a recently published Physical Review Letters, the team described electron acceleration experiments performed at LLNL’s Jupiter Laser Facility. Using the ultra-short-pulse Callisto laser system, a plasma was produced in a low-density gas cell target. The interaction of the high-intensity laser with the gas created a relativistic plasma wave, which then accelerated some of the electrons in the plasma to more than 100 megaelectron volt (MeV) energies. 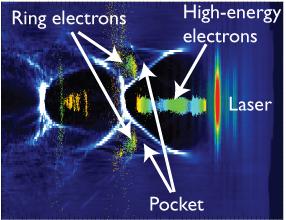 These electron beams are usually directed along the laser axis and have fairly low divergence. In these experiments, the typical beams were observed, but in certain cases were also accompanied by a second, off-axis beam that had a ring-like shape. This new feature had never before been reported, and its origin was unclear until the UCLA collaborators finished computationally intensive three-dimensional calculations of the experimental conditions.

"The dynamics of the plasma wave are often calculated in simulations, but the small spatial scale and fast timescale of the wakefield process has made direct measurements of many effects difficult or impractical," said lead author Brad Pollock. "The discovery of new features, such as the electron rings here, allows us to compare with simulations and infer what is going on in the experiments with much greater confidence."

"In addition to the diagnostic implications of this particular feature, it may also be possible to tailor the parameters of electron ring-beams for their own applications, including accelerating positively charged particles – positrons, for example," Pollock added.