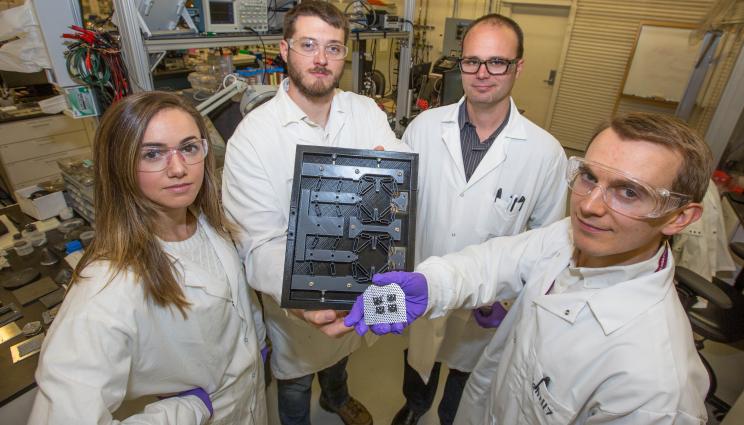 Lawrence Livermore National Laboratory scientists and engineers are combining mechanical computing with 3D printing as part of an effort to create “sentient” materials that can respond to changes in their surroundings, even in extreme environments. Pictured, from left, are LLNL researchers Julie Jackson Mancini, Logan Bekker, Andy Pascall and Robert Panas. Photos by Julie Russell/LLNL

Taking a page from the past, Lawrence Livermore National Laboratory scientists and engineers are combining mechanical computing with 3D printing as part of an effort to create "sentient" materials that can respond to changes in their surroundings, even in extreme environments that would destroy electronic components, such as high radiation, heat or pressure.

Original computers, like Charles Babbage’s Difference Engine, were fully mechanical, filled with gears and levers that turned, moved and shifted to solve complex mathematical calculations. After World War II and the rise of vacuum tubes and electronic circuits, mechanical computers mostly went the way of the dodo.

However, putting a new twist on the old technology, Lawrence Livermore National Laboratory (LLNL) researchers and contributors from the University of California, Los Angeles (UCLA) are 3D printing mechanical logic gates — the basic building blocks of computers capable of performing any kind of math calculations.

Like LEGOs, these 3D-printed logic gates could be used to build just about anything, researchers said, embedded into any type of architected material and programmed to react to its environment by physically changing shape without the need for electricity -- useful in areas of high radiation, heat or pressure. The research was published online today by the journal Nature Communications.

"Certain electric applications are limited, whereas with this system, the material could completely reconfigure itself," said lead researcher Andy Pascall. "If you embedded logic gates into material, that material could sense something about its environment. It’s a way of having a responsive material; we like to call it a ‘sentient’ material — that could have complicated responses to temperature, pressure, etc. The idea is it’s beyond being smart. It’s responding in a controlled, precise way." 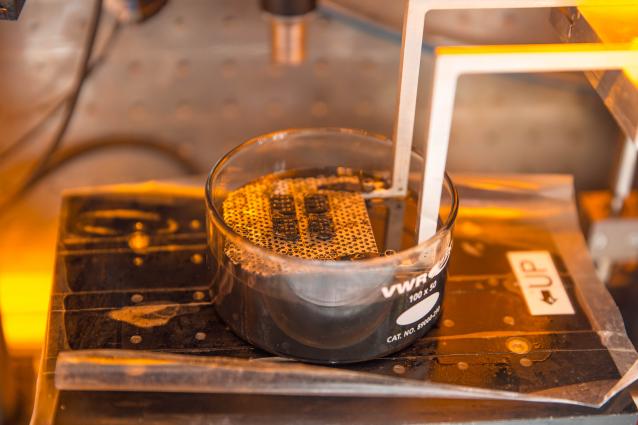 Mechanical logic gates, while not as powerful as typical computers, could prove useful in rovers sent to hostile environments such as Venus, or in low-power computers intended to survive nuclear or electromagnetic pulse blasts that would destroy electronic devices, researchers said. In a Venusian rover, Pascall said scientists could implement a control system so if the rover got too hot, the material could open its pores to allow in more coolant, with no electricity needed.

The devices also could be used in robots sent to collect information on nuclear reactors (e.g., Fukushima) or, while appearing like any type of material, could be concealed inside just about any kind of imaginable structure.

"The nice thing about our design is it’s not limited in scale," Pascall said. "We can go down to an order of several microns up to as big as you need it to be, and it can be rapidly prototyped. This would be a difficult task without 3D printing."

Panas, the project’s principal investigator, said the flexures behave like switches. The flexures are chained together and, when stimulated, trigger a cascade of configurations that can be used to perform mechanical logic calculations without external power. The gates themselves work due to displacement, taking in an external binary signal from a transducer, such as a pressure pulse or pulse of light from a fiber optic cable and performing a logical calculation. The result is translated to movement, creating a domino effect throughout all the gates that physically changes the shape of the device.

"Many mechanical logic designs have substantial limitations and you run into fanciful designs that could not be fabricated," Panas said. "What we’re doing is using these flexures, these flexible elements that are 3D printed, which changes how the logic structure can go together. We eventually realized we needed a displacement logic setup (to transfer information). Surprisingly, it actually worked."

The flexures’ buckling action allows the structure to be preprogrammed or store information with no need for an auxiliary energy flow, Panas said, making them well-suited for environments with high radiation, temperature or pressures. Panas said logic gates could be used to collect temperature readings in vaccines or foods and notify when certain thresholds have been reached, or inside bridges to collect data on structural loading, for example.

"We see this as simple logic being put into high-volume materials, potentially getting readings in places where you can’t normally get data," Panas said.
At UCLA, Hopkins used a 3D printing process called two-photon stereolithography, where a laser scans within a photocurable liquid polymer that cures and hardens where the laser shines, to print a set of gates at a sub-micron level.

"Once the structure was printed, we then deformed it in place using different lasers that act as optical tweezers," Hopkins explained. "We then actuated the switches using those optical tweezers as well. It's a revolutionary new approach for making these materials at the micro-scale."

The design was driven by computationally modeling the gates’ buckling behavior, and although they were designed in two dimensions, Pascall said he would like to move to 3D. Pascall hopes the technology can be used to design secure, personalized control systems, and said plans are to release the design as open source. The technology also could be a teaching tool for students, who could print their own logic gates using commercial 3D printers and learn about how computers work, he added.