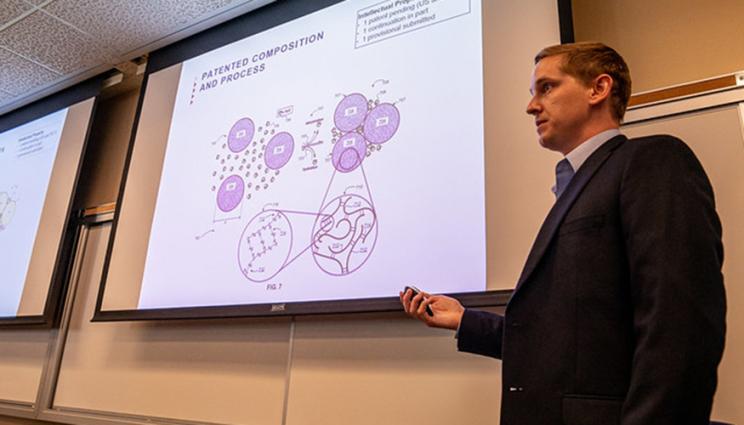 Scott Compel, who had been an LLNL postdoc for the past two and a half years, and Erika Suzuki, a scientist at Lawrence Berkeley National Laboratory, tied for first place in the National Lab Accelerator Pitch Event held Sept. 25 in San Ramon. Photos by Hannah Farquar/LLNL

Researchers from a dozen Department of Energy (DOE) national labs recently converged on Northern California to compete in their own version of the popular “Shark Tank” television program.

Although Mr. Wonderful, Barbara Corcoran and Mark Cuban weren’t in attendance, the competition still boasted five judges who are highly successful entrepreneurs and angel investors in the Bay Area and Silicon Valley.

The competition was staged at the University of California, Davis campus at Bishop Ranch in San Ramon, with researchers pitching their technologies as having the most potential to move from lab-to-market and make a significant market impact.

At stake was a $25,000 first prize for the best presentation that was provided by the DOE Office of Technology Transitions, the sponsor of the event.

Two researchers, Scott Compel, who had been an LLNL postdoc for more than two years, and Erika Suzuki, a scientist at Lawrence Berkeley National Laboratory, tied and will be awarded prize money.

“It was a huge success based on the comments we received back from the participants and the investors,” said Roger Werne, a senior adviser for LLNL’s Innovation and Partnerships Office (IPO).

“It was an impressive display of the diversity of science within the DOE labs, as well as the entrepreneurial training by national lab technology transfer offices,” Farquar said.

Scientists or engineers competing in the event were given 10 minutes to pitch the commercial value of their technology, followed by 10 minutes of questions from the judges and other investors in the audience.

As part of the preparation for the National Accelerator Lab Pitch event, each of the national labs trained their researchers in entrepreneurship.

“At LLNL, there were eight participants who spent about six months working with outside entrepreneurs to develop their business concepts and pitches,” Werne said. “Out of the eight Lab researchers who worked with mentors, we’re hopeful that three of the technologies could end up as the basis for startup companies.”

On Sept. 3, the Livermore IPO held the LLNL pitch event, which Compel won, qualifying him to compete in the national event.

The technology that Compel pitched was MetalMonomers, a new class of materials created at LLNL that exhibit prolonged antibiotic properties. It is estimated that 4 percent of hospital patients incur at least one hospital-acquired infection each day.

“The competition was fierce,” Compel said. “Everyone there was well-prepared. I was well-trained, too, but I wasn’t necessarily expecting to win. Winning is great. This money can be used to complete proof-of-concept experiments to advance the technology.”

Compel, who received mentoring from a former Lab scientist who had become a serial entrepreneur, had been considering moving into other fields for several months.

“I had always wanted to put together a startup company; winning this competition gave me more confidence that this idea could actually work.

“The main thrust of the mentoring is to help scientists approach their research and development toward more of a product-driven standpoint. What I really learned is how to create something that the public needs rather than making only a fundamental advance in science,” Compel explained.

The $25,000 prize money can be used within the two national labs to further commercialize the researchers’ technologies.

Last month’s National Lab Accelerator Pitch Event was the second that has been put together by LLNL (the first was in 2017), and Werne hopes it can become an annual event.

In addition to Werne and Farquar, other IPO staff members who assisted in the event were Connie Pitcock, a business development and marketing associate, and LaTonna Wilson, an administrator.

Among the other national labs that sent researchers to the national pitch event were: Brookhaven, Los Alamos, Sandia, Oak Ridge, Idaho, Argonne and Pacific Northwest, as well as Fermilab, the National Renewable Energy Laboratory and the National Energy Technology Laboratory.