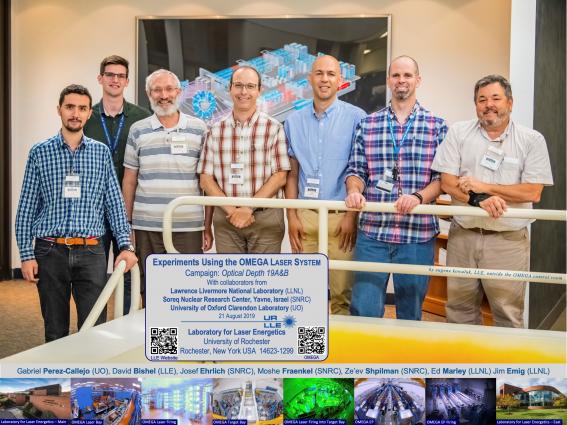 For the first time, researchers have isolated in a controlled laboratory setting the effects of the plasma geometry in its X-ray emission spectrum – the energy distribution of the radiation the plasmas emit.

The work also is the first experimental testbed of the theories describing a phenomenon known in astrophysics as resonant scattering. This phenomenon is found in a plasma of sufficient size and density where photons are emitted within the system and have a probability of being reabsorbed and reemitted multiple times. Additionally, researchers observed the geometric inversion of a plasma merely from its spectrum for the first time.

Led by postdoctoral researcher Gabriel Pérez-Callejo, now at the University de Bordeaux, and colleagues at Lawrence Livermore National Laboratory (LLNL), the work was featured in Physical Review Letters. The work was conducted as part of the OpticalDepth experimental series at the Omega Laser Facility at the University of Rochester and was a collaboration between LLNL and the University of Oxford.

“The spectra of non-isotropic plasmas — fundamental to diagnosing their temperatures and densities — vary depending on the position of the observer,” said Pérez-Callejo, lead author of the work. “Although there are theoretical approaches to this problem, owing to the difficulty of isolating the plasma geometry from other variables, no experimental confirmation had yet been obtained. We are now able to obtain information about how the geometry of a plasma is changing, merely from its X-ray spectrum.”

Being able to study how these geometric variations depend on the vantage angle for different geometries will provide new insights on anomalous astrophysical data and can even be used for diagnosing the conditions of inertial confinement fusion (ICF) implosions.

Pérez-Callejo explained that the work will benefit astrophysics in that researchers could determine the geometry of structures within galaxy clusters or stellar atmospheres, which cannot be resolved with current instruments. He said the research also will benefit ICF experiments that use cylindrical tracers.

“This can be done by time-resolving the spectrum of the tracer and observing how its geometry is changing with time,” he said. “Researchers can get additional information about the hydrodynamic evolution of the implosion.”

“Our goal has been to provide experimental and theoretical grounds for adopting a more intuitive notion of a physical process that often seems excessively complex,” said Duane Liedahl, LLNL theoretical team lead. “The resonant scattering effect has its historical roots in observational and theoretical astrophysics. We can now give something back to astronomers who are working to infer physical conditions and geometries of radiation sources that, obviously, cannot be controlled. The cross-fertilization between two otherwise disparate fields, astrophysics and HED physics, that work on vastly different size and time scales, is one of the more exciting aspects of this project.”

To conduct the work, the researchers used cylindrical beryllium (Be) targets which contained a buried disk of a scandium/vanadium (Sc/V) mixture. By shooting both the front and back of the Be with the same laser irradiation profile, researchers managed to generate a uniform Sc/V plasma cylinder.

By changing the radius of the buried layer disk, researchers managed to generate two plasmas that evolved following the same temperature and density paths, but had a different radius (the thickness of the disk followed the same path in both cases). This gave the team spectral measurements of the direct effect of only changing the radius of the plasma.

The team conducted the research at the Omega facility and demonstrated the effect in the X-ray spectra emitted by cylindrical plasmas generated by high power laser irradiation, confirming the geometrical interpretation of resonant scattering.