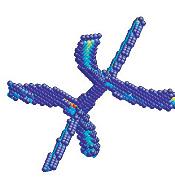 Atomistic simulation reveals the multijunctions in the metal molybdenum. 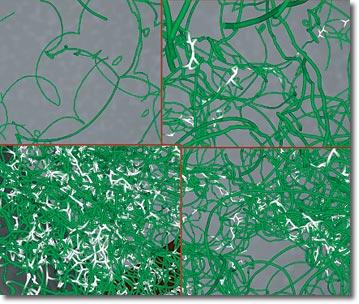 LIVERMORE, Calif. — Lawrence Livermore National Laboratory researchers have discovered that three is the magic number when it comes to strengthening metals.

Since the Iron Age, metallurgists have known that metals such as steel become stronger and harder the more you hit (or beat) on them.

But it wasn't always clear why this happened. Vasily Bulatov and colleagues at Lawrence Livermore National Laboratory discovered that the common explanation for this hardening process ignored a key component.

The theory of dislocation was invented in the 1930s. Research since then has focused on dislocation interactions and their role in hardening metals, in which continued deformation increases the metal’s strength (much like a blacksmith pounding on steel with an anvil).

But the Livermore team found that three or more dislocations create a strong, nearly indestructible locking mechanism. “When you beat on metal, dislocations multiply like crazy,” Bulatov said. “The metal gets stronger, but we didn't know exactly how that strength came about. What we found was that the strength becomes greater each time three dislocation lines intersect.”

Bulatov said the hardening mechanism could be applied in any strong metal, from bridges to ships to rebar within the walls of buildings.

Potentially, you can take advantage of this behavior,” he said. “Dislocation interaction was known for 70 years. We now show exactly how it happens. Two at the time was thought to do it, but three at a time makes a big difference.”