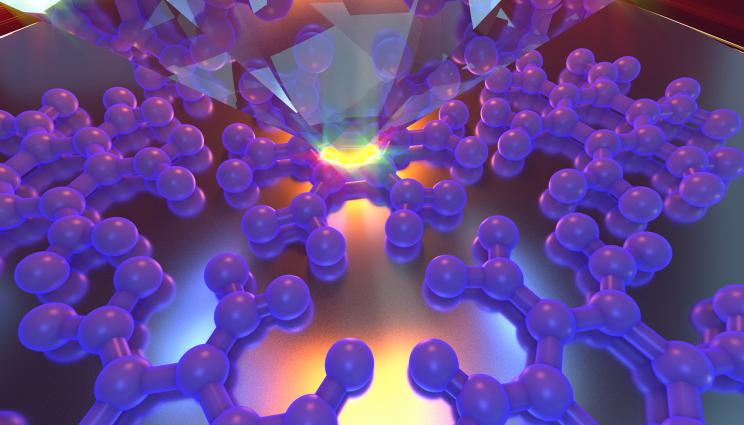 Lawrence Livermore National Laboratory (LLNL) scientists in collaboration with University of Nevada Las Vegas (UNLV) have discovered a previously unknown pressure induced phase transition for TATB that can help predict detonation performance and safety of the explosive. The research appears in the May 13 online edition of the Applied Physics Letters and it is highlighted as a cover and featured article.

1,3,5-Triamino-2,4,6- trinitrobenzene (TATB), the industry standard for an insensitive high explosive, stands out as the optimum choice when safety (insensitivity) is of utmost importance. Among similar materials with comparable explosive energy release, TATB is remarkably difficult to shock-initiate and has a low friction sensitivity. The causes of this unusual behavior are hidden in the high-pressure structural evolution of TATB. Supercomputer simulations of explosives detonating, running on the world’s most powerful machines at LLNL, depend on knowing the exact locations of the atoms in the crystal structure of an explosive. Accurate knowledge of atomic arrangement under pressure is the cornerstone for predicting the detonation performance and safety of an explosive.

The team performed experiments utilizing a diamond anvil cell, which compressed TATB single crystals to a pressure of more than 25 GPa (250,000 times atmospheric pressure). According to all previous experimental and theoretical studies, it was believed that the atomic arrangement in the crystal structure of TATB remains the same under pressure. The project team challenged the consensus in the field aiming to clarify the high-pressure structural behaviour of TATB.

"The issue of phase transitions in compressed TATB has been debated for decades. We were sure our approach would eventually settle this issue — but it was much more challenging to find the answer than we had expected," said Oliver Tschauner, a professor in the department of geoscience at UNLV.

Surprisingly, the experimental results revealed a previously unknown transition to a higher symmetry monoclinic phase above 4 GPa. The experimental results allowed the team to determine the basic characteristics (lattice parameters and cell volume) of the high-pressure crystal structure and the equation of state (density as a function of pressure)  above the phase transition. However, the team did not stop at this point

"Although the experimental results allowed us to to apply important corrections to the TATB equation of state, we were determined to go one step further and understand the nature of the phase transition and the exact structure of the high-pressure phase," explained Elissaios Stavrou, a staff member in the Material Science Division at LLNL.

"Almost everything about a material can be derived from its crystal structure,"  said Brad Steele, a postdoctoral scientist in the Material Science Division at LLNL and lead author of the research. "In this paper we show we can predict the crystal structure even for a large/complicated energetic material such as TATB. The methods used have many potential applications in the field of materials science."

Based on the USPEX results, the team determined that the phase transition involves a pressure-induced in-plane shift of the graphitic-like layers of TATB molecules in the ambient-pressure phase.

Matthew Kroonblawd, a staff member in the Material Science Division at LLNL, further explained: "TATB is notoriously difficult to model, but we were able to relate the old and new phases using generalized computational tools that we developed specifically for these complicated molecular materials. This new phase resolves conjectures that have persisted since the 1970s."

The team plans to use the same combination of state-of-the-art experimental and theoretical techniques to discover possible phase transitions in other energetic materials. However, the methodology used in this study is not limited to energetic materials and substantially expands the team’s ability to reveal the crystal structures and stoichiometries under variable thermodynamic conditions.

This research was supported by the high explosives Dynamic Materials Properties research program at LLNL and the LLNL Laboratory Directed Research and Development Program.