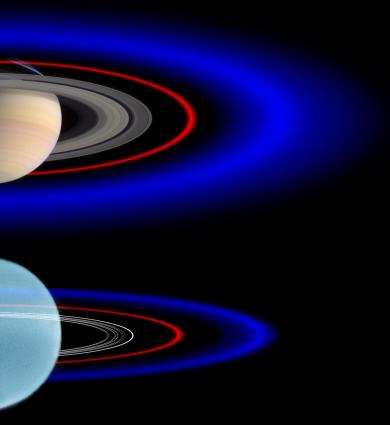 LIVERMORE, Calif. — Most of us feel blue from time to time, and the solar system’s seventh planet is feeling it, too – in its outermost ring.

The outer ring of Uranus, discovered late last year, is bright blue, making it only the second known blue ring in the solar system.

Saturn’s E ring is the only other known example of a blue planetary ring. The blue rings of Saturn and Uranus both are associated with small moons.

According to recent research, the particles in the planet’s blue ring are likely produced by impacts on Mab, one of Uranus’ smallest moons. Mab is embedded within the blue ring.

The research, conducted by Seran Gibbard of Lawrence Livermore National Laboratory, Imke de Pater of UC Berkeley, Mark Showalter of the SETI Institute and Heidi Hammel of the Space Science Institute, indicates that the similarity between the outer rings of Saturn and Uranus may be due to a similar production mechanism for both rings.

Earlier research attributes Saturn’s blue ring to the small dust, gas and ice particles spewed into the orbit of Enceladus, one of Saturn’s moons. But now scientists say the newly discovered plumes on the Enceladus’ surface may have caused the blue ring. However, Mab is likely a small, dead rocky ball about 15 miles across that could not churn out plumes of material.

“We suspect that both rings owe their blue color to gravitational forces acting on dust in the rings that allow smaller particles to survive while larger ones are recaptured by the moon,” Gibbard said.

Earlier this year, scientists discovered two faint rings, located well outside of Uranus’ main ring system. The outer ring is centered on the orbit of the tiny moon Mab and is blue, while the other ring, which orbits between the moons Rosalind and Portia, is red.  Rings around the giant planets in our solar system – Jupiter, Saturn, Uranus and Neptune – are typically reddish because they contain many large particles that mostly reflect longer (red) wavelengths of light.

Though the recent research doesn’t provide a definitive reason as to why the newly discovered ring is blue, there are some earlier theories that were proposed before the Cassini spacecraft flew by Enceladus and discovered plumes coming from that moon.

That model predicted that meteoroid impacts on the surface of Enceladus scatter debris into its orbit in a broad range of sizes. While the larger pieces remain within the moon’s orbit and eventually are swept up by the moon, smaller particles are subject to subtle forces that push them toward or away from the planet, out of the moon’s orbit. These forces include pressure from sunlight, magnetic torques acting on charged dust particles and the influence of slight variations in gravity due to the equatorial bulge of Saturn.

The net result is a broad ring of smaller particles, less than a tenth of a micron across – a thousandth the width of a human hair – that scatter and reflect predominantly blue light.

“This model can be transferred directly to what we now see in Uranus,” de Pater said, although the researchers still need to understand the details of the process.

The blue ring was discovered after combining ground-based near-infrared observations from the Keck Telescope in Hawaii and visible-light photos taken by the Hubble Space Telescope. After other scientists discovered two new rings – Uranus’ 12th and 13th – and two new moons, Mab and Cupid, de Pater, Hammel and Gibbard reported seeing the red, innermost of the two new rings, but not the outermost.

The outer ring could be seen in visible light but was not observable in the near-infrared, which indicates that it must be blue. Mab also could not be seen in the infrared, so it is likely covered with water ice, like the other outer moons of Uranus.

“If the surface of Mab had been similar to Uranus’ other inner moons, we would have seen it in the infrared,” Gibbard said. “This implies that it’s probably covered by water-ice, like Uranus’ larger moons.”

The research appears in the April 7 issue of the journal Science .