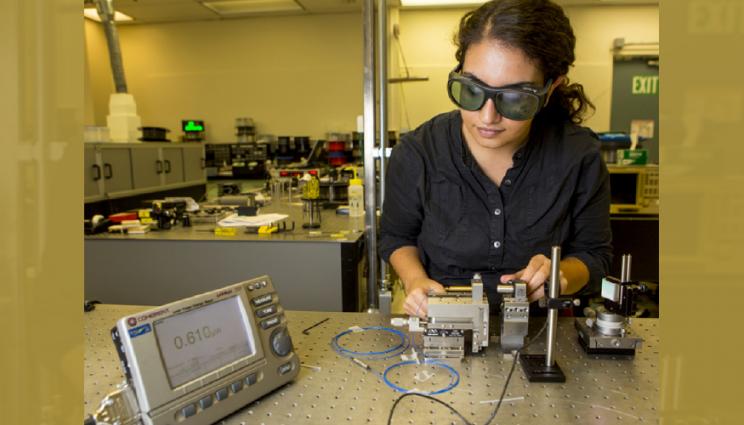 More than 3.4 billion people are connected to the Internet, placing ever-increasing demand on the telecom industry to provide bigger, better and faster bandwidth to users. Lawrence Livermore National Laboratory (LLNL) researchers have taken an important step in addressing that need by developing a new type of optical fiber amplifier that could potentially double the information-carrying capacity of fiber-optic cables.

Most of the data for the Internet travel on fiber-optic cables, which are made up of bundles of threads that transmit laser light. As the fiber gets longer, however, power is lost due to attenuation. In the late 1980s and early ’90s, researchers discovered that they could mitigate this loss by developing inline fiber-optic amplifiers.

At the time, lasers operated at a wavelength of 1.3 microns, or 1,300 nanometers (nm). No optical amplifiers were developed, however, that worked well in that region. Researchers were able to develop an amplifier at 1.55 microns, or 1,550 nm, so laser transmission systems were switched to match. At the same time, they discovered that inline optical amplifiers allowed them to amplify many different lasers at one time, a discovery that increased the information carrying capacity of a single optical fiber from 155 megabits a second to more than one terabit a second. While this was a huge increase, it is still a limited amount of information, requiring many cables to transmit.

Flash forward 25 years. The Livermore team was working on neodymium-doped optical-fiber lasers, which lase at 1,330 nm (1.33 microns), 1,064 nm (1.064 microns) and 920 nm. The team built a custom optical fiber that suppressed lasing at 1,064 nm and amplified light preferentially at 920 nm. In the course of testing the 920-nm laser, the team observed in the fluorescent spectra that the fiber also showed signs of amplification at 1,400-1,450 nm -- a wavelength that never worked previously.

Previous fiber amplifiers did not suppress lasing at 1,064 nm and also were observed to suffer from an effect known as excited-state absorption in the 1,330-nm region. This effect actually causes the fiber loss to increase when pump light is applied -- the opposite of the desired effect, which is to generate optical gain.

The team then redesigned the fiber to suppress laser action at both 1,064 nm and 920 nm. This new fiber, which completely eliminates the potential for lasing at 920 nm or 1,064 nm, can now only provide gain on the 1,330-nm laser transition. Excited-state absorption still precludes amplification at 1,330 nm, but the laser line amplifies light across a large range of wavelengths. 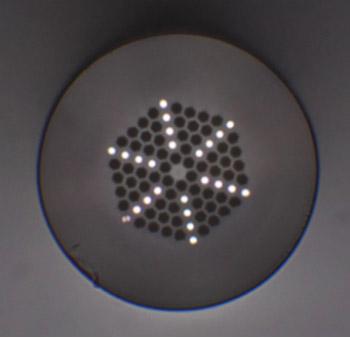 The team discovered that from 1,390 nm to 1,460 nm there is significant positive optical gain, and this new fiber generates laser power and optical gain with relatively good efficiency. This discovery opens up the potential for installed optical fibers to operate in a transmission region known as E-band, in addition to the C and L bands where they currently operate -- effectively doubling a single optical fiber’s information-carrying potential.

“The key missing component for operating a telecom network in this wavelength region has been the optical fiber amplifier,” said Jay Dawson, deputy program director for DoD Technologies in the NIF and Photon Science Directorate. “What we’ve done is effectively create something that will look and feel like a conventional erbium fiber amplifier, but in an adjacent wavelength region, doubling the carrying capacity of an optical-fiber amplifier.”

The amplifiers would potentially allow telecom companies to more heavily leverage their installed base of equipment, requiring less capital investment than new cable -- resulting in expanded bandwidth and lower costs to the end user. Installation of new cable is expensive; a service provider must not only purchase new cables, but also undergo the large expense of digging trenches to install the new cable.

“To me, that’s what is exciting about it,” he added. “It’s something that no one has previously been able to do, and the potential is there to really make a big difference.”

“This appeared to be a significant discovery that may solve a problem in the telecommunications industry, which is a large and important market, but more R&D was needed,” said Michael Sharer, IPO manager for technology commercialization. “The IDF committee felt that this was an important project to fund from this standpoint.”