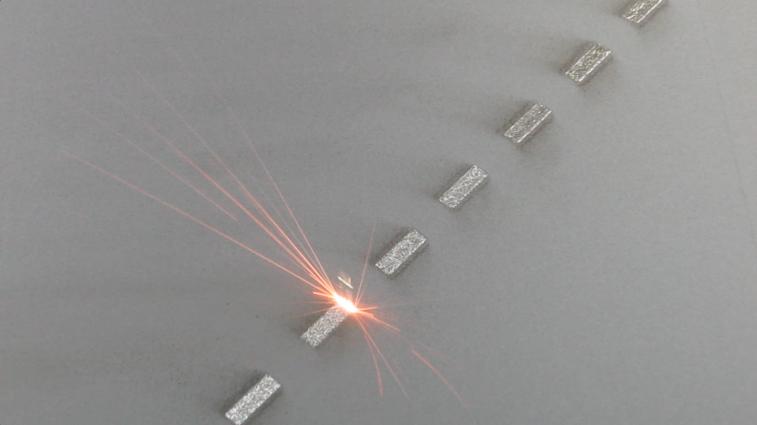 Direct metal laser melting (DMLM) machine in action: A laser fuses metal powder to form one of many successive layers that will form the final manufactured part. 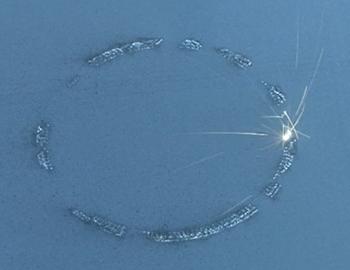 A cylinder is built using Selective Laser Melting (SLM) -- an additive manufacturing process -- and the island scanning pattern, where the region to be melted is divided into smaller islands that are scanned randomly by the laser.

Selective laser melting (SLM) is a powder-based, additive manufacturing process where a 3D part is produced, layer by layer, using a high-energy laser beam to fuse the metal powder particles. Some SLM applications require parts that are very dense, with less than 1 percent porosity, as the pores or voids are the weakest part of the material and most likely would result in failure.

But building functional parts and components to specific standards and performance specifications can be challenging because a large number of parameters must be set appropriately. Some of the key parameters include laser power, laser speed, distance between laser scan lines, scanning strategy and powder layer thickness. As a result, there is a need for a reliable and cost-effective approach to determine the right parameters to develop parts with such desired properties as high density.

LLNL researchers have developed an efficient approach, based on simple simulations and experiments, to identify optimal parameters to print 3D high-density metal parts. Their work, titled "Density of additively-manufactured, 316L SS parts using laser powder-bed fusion at powers up to 400W" was recently published in the International Journal of Advanced Manufacturing Technology.

The paper explains how parameters for higher-power SLM machines can be selected by using simple, computational simulations to explore the process parameter space. These simulations are used to compute the dimensions of the melt pool, which is the pool of liquid formed when the laser melts the metal powder particles.

"We mine the simulation output to identify important SLM parameters and their values such that the resulting melt pools are just deep enough to melt through the powder into the substrate below," said Chandrika Kamath, an LLNL researcher who is the lead author of the article. "By using the simulations to guide a small number of single-track experiments, we can quickly arrive at parameter values that will likely result in high-density parts."

Kamath and her colleagues, who are part of LLNL's Accelerated Certification of Additively Manufactured Metals (ACAMM) Strategic Initiative (acamm.llnl.gov), are using simulations at various scales to gain insight into the SLM process.

"We found that the metal density reduces if the speed is too low, due to voids created as a result of keyhole mode laser melting, where the laser drills into the material," Kamath wrote. "At the same time, too high a speed results in insufficient melting. The key is to find the right parameters where the melting is just enough."

The LLNL team found that the use of different powders affected densities at lower power, but not at higher power.

"Furthermore, for 316L stainless steel, at higher powers, the density is high over a wider range of scan speeds, unlike at lower powers," the article states. "This would indicate that higher powers could provide greater flexibility in choosing process parameters that optimize various properties of a manufactured part."

Although 316L stainless steel was used in this experiment, Kamath said the team's approach can be applied to other metal powders as well.

LLNL's findings will eventually be used to help certify properties of metal parts built using SLM. The paper is the first step in understanding how we can exploit computer simulations and a small number of carefully chosen experiments to efficiently determine the process parameters, Kamath said.