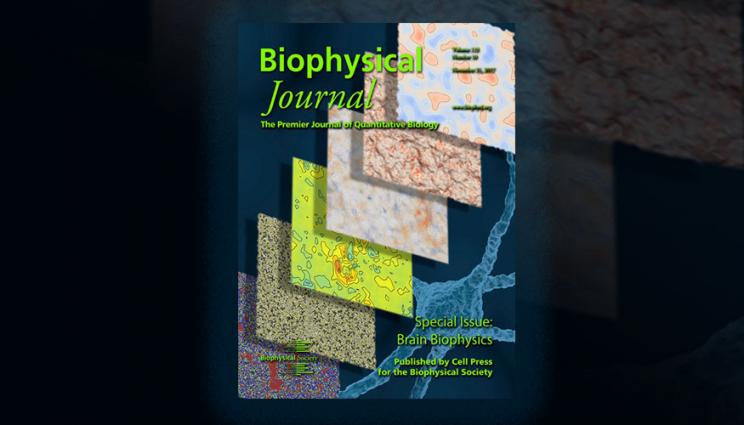 In a cover article of Biophysical Journal, Lawrence Livermore scientists report on their efforts to characterize the behavior cell membranes.

An article authored by a team of Lawrence Livermore National Laboratory (LLNL) scientists has characterized how different cell membranes behave.

"Different membranes in different parts of the body have different barrier strengths that are required for drugs to penetrate them to reach the organ," said Tim Carpenter, a computational biophysicist in the Lab’s Biosciences and Biotechnology Division and a co-lead author of the paper.

Cell membranes are the skin or cover of the body’s cells and are composed of millions of lipids, the building blocks for membranes.

One of the team’s images from their work made the cover of the leading journal of quantitative biology. Their image, showing six different computational visualizations of a cell membrane for a single brain cell, was featured as the cover story in a special issue of Biophysical Journal, that focuses on brain biophysics and is published by the Biophysical Society.

"One of the most interesting insights we found was that there were subtle differences in the behavior of different membranes that only became apparent in the large-scale simulations. These differences would have been overlooked in any simulation that used smaller numbers of lipids.

"These are some of the largest simulations of this type ever published, when considering the size of the system, the length of the simulations and the complexity of the membrane," Carpenter added.

In effect, the properties of both proteins and drug molecules can be modified by the membrane’s environment.

"As a result, if we want to accurately study and predict how both proteins and drugs behave either on their own, or when interacting with each other, it is important to study them in the correct environment. The influence of the membrane may mean that the same drug and the same protein could interact differently in different organs of the body," Carpenter said.

"Creating a realistically complex neuronal plasma membrane mixture was quite challenging and highlighted a number of gaps in the current understanding of membrane biology," Ingolfsson said.

Beyond Carpenter and Ingolfsson, the team that produced the Biophysical Journal cover story included computer scientists Harsh Bhatia and Peer-Timo Bremer and computational chemist Felice Lightstone, all of LLNL; and Siewert-Jan Marrink, a professor of molecular dynamics at the University of Groningen in The Netherlands.

This research was supported by the Laboratory Directed Research and Development Program, project #16-FS-007.