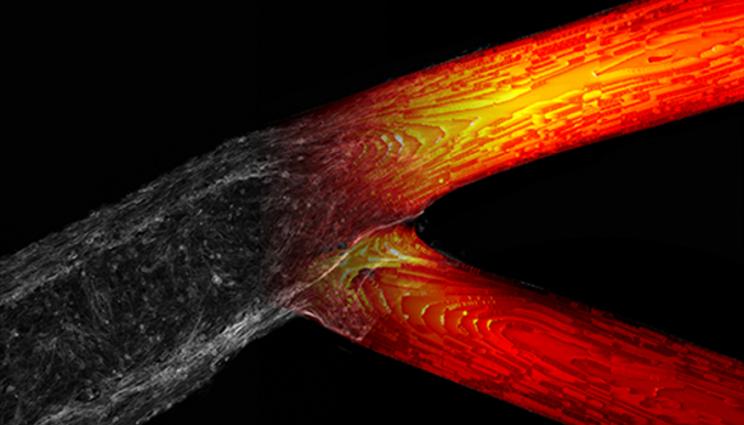 Researchers at Lawrence Livermore National Laboratory and Duke University combined 3D bioprinting and computational flow models to analyze the physics behind circulating tumor cell behavior and the cells’ attachment to the vascular endothelium, the layer of cells that line the interior surface of blood vessels. Visualization by Claire Robertson/LLNL.

Lawrence Livermore National Laboratory (LLNL) scientists have paired 3D-printed, living human brain vasculature with advanced computational flow simulations to better understand tumor cell attachment to blood vessels, the first step in secondary tumor formation during cancer metastasis. The unique approach, developed with outside collaborators, lays the foundation for developing a predictive capability that can help clinicians and researchers anticipate the spread of cancer within individual patients, according to LLNL researchers.

The study, published online today in the journal Science Advances, describes a new approach to training computational models on biological processes and provides insights into how and why cancer cells metastasize in certain areas of the vasculature, researchers reported.

The team, which includes scientists at Duke University, combined bioengineering and computation to analyze the physics behind circulating tumor cell (CTC) behavior and the cells’ attachment to the vascular endothelium, the layer of cells that line the interior surface of blood vessels.

Tumor cells tend to escape from a primary tumor and travel through the vasculature, where they eventually attach to a vessel wall, pass through the endothelium into the tissue and grow like a seed in soil, usually in areas such as forks in the blood vessels, explained LLNL biomedical engineer Monica Moya, principal investigator of the study and lead researcher on LLNL’s bio-printed vasculature device.

While research has been done on what attracts tumors to certain areas, less is known about the contribution of physics in cancer metastases, because the processes are extremely difficult to replicate in the lab, Moya said. Typically, scientists use animal models, which make real-time visualization and measurements of the spread of circulating tumor cells complicated and less relevant to human biology. However, LLNL’s 3D-printed vasculature device is well-suited for addressing the physics involved in cancer spreading via metastasis because researchers can control the biology, fluid dynamics and geometry of the vasculature and perform real-time measurements of actual vascular flow and how it affects circulating tumor cells.

“Computational modeling is definitely a useful tool, but you still need to benchmark it against something real,” Moya said. “With this approach, we can make the biology as simple and clean as it needs to be to validate the models, and we can increase the complexity, both in the biology and the computational model. Physics matters in biology, and this paper really sets the framework of how you can use these in vitro models, paired with simulations, to tease apart the contribution of the biology and the physics and really bring a strength to the field that has been lacking.”

To create the in vitro system, Moya and her team 3D printed vasculature out of human cerebral endothelial cells, subjecting them to flow conditions in the fluidic platform. After the cells completely covered the device’s channels, they aligned within the vessels and after about a week, researchers injected a breast cancer cell line into the device to see how and where the tumor cells began to metastasize (or stuck) inside the newly formed brain vasculature. After the tumor cells circulated at physiological flow rates, Claire Robertson, a Lawrence Fellow who works on developing models of early breast cancer, mapped more than 6,000 cells that adhered to the vessel walls and compared them to local biophysics. These experimental results were then compared to 3D computational simulations replicating geometries gathered from the 3D maps to reproduce the exact geometry of the bioprinted vessels, enabling highly accurate fluid dynamics analysis of the attachment conditions, researchers said.

“Adapting this advanced bioprinting process to engineer functional, perfusable human brain vasculature was extremely challenging, however we now have a strong handle on the technique and can potentially fabricate a wide variety of living human tissue constructs,” said lead author and LLNL research staff engineer William “Rick” Hynes. “Using this approach, we were able to test, observe and measure a biological phenomenon that was previously impossible, and we will continue to iterate on these findings to shed light on how and when circulating tumor cells choose their targets in vivo. By pairing our engineered platform with computational modeling, we can directly interrogate the behavior of metastatic cells and the rules that govern them far more rapidly than through experimentation alone.”

For the computational component of the research, Moya and her team worked with Amanda Randles, a former Lawrence Fellow at LLNL, now an assistant professor in biomedical engineering at Duke University. Randles’ team used an algorithm called HARVEY, developed by Randles, to replicate blood flow and cancer cells, validating the code on micro-vessels and introducing explicit cancer cells modeled in the geometry. The code was developed and optimized for the Summit supercomputer at Oak Ridge National Laboratory, but the simulations were completed at LLNL and at Duke.

Using HARVEY, researchers were able to capture flow rates that would be difficult to do by in vitro devices alone, allowing researchers to “turn off” specific parameters that wouldn’t be possible in experiments, such as the elasticity of a cell, number of cell receptors or flow profile, Randles said. With the approach, researchers determined that wall shear stress is important in determining cell adhesion to vessel walls but does not solely govern the tumor attachment process. Areas where circulating tumor cells stuck were not fully explained by blood flow patterns alone, suggesting that flow could potentially activate the endothelial cells and contribute to where circulating tumor cells adhere, researchers said.

The living vasculature bioprinted at LLNL was essential to validating the computer models, Randles said, because it allows for a controlled environment where factors such as geometry can be precisely replicated.

“Biology is complex,” Randles said. “We’re starting to get closer to mimicking the real biology of what you’re seeing in the vasculature, but doing so in a stepwise fashion where everything is controlled, we know what the material properties are of the walls, the geometry we’ve set up and the flow that’s going through. We can start to get toward replicating what’s really happening in the body, where we have a test bed to understand how cancer cells interact and why you may see metastases occur where you do.”

Moya said the combination of bioprinted in vitro devices with computer models could allow researchers to decouple the biological and physical contributions that drive metastatic seeding. Such simulations could be used to predict locations where tumors will spread, which would enable targeted screening of high-risk patients and therapeutic intervention aimed at the most vulnerable areas. Clinicians could take patient MRIs and use them to simulate where circulating tumor cells are likely to get stuck, and the models could tell clinicians which areas to focus their attention to greatly enhance the efficacy of treatments, Moya added.

“Most people don’t really think about using these in vitro beds as a way of growing the computational part,” Moya said. “These are two really powerful technologies. It’s something we’re uniquely suited to because we have access to supercomputers. There is more to these tissue constructs than just glorified in vitro studies — you can actually get useful information and start to acknowledge the role of physics in biology.”

The LLNL team, led by Moya, has submitted a grant for a follow-on project that will examine how flow patterns, vascular geometry, tumor cell mechanics and tissue mechanics influence the metastatic cascade, Moya said. They are working to develop ways to capture cellular interactions in larger geometries, which will require higher-resolution models and studying flow behavior of different cancer cell types. Researchers also are pursuing funding to support additional bioprinting efforts, such as a project led by Hynes focusing on developing novel techniques for printing living microbial cells for a wide variety of applications, ranging from biomanufacturing to smart materials.

Moya wants to increase the complexity of bioprinted vasculature to further examine the role of biophysics in the progression of deadly disease. Additionally, a separate team led by Hynes and Moya is looking at modeling blood flow in bioprinted brain aneurysms to test surgical interventions, as well as continuing work with Randles’ group at Duke for simulating vascular blood-clot formation in response to aneurysm treatments.