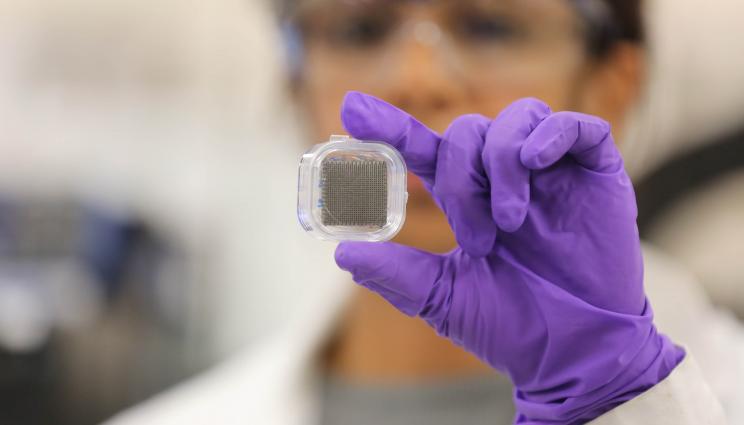 In a paper published Oct. 18 by the online journal Joule, the joint research team demonstrated 3D-printed porous graphene aerogel structures capable of supporting ultrahigh levels of manganese oxide (MnO2), a common pseudocapacitive material (a material that stores electric charge chemically and exhibits a high theoretical energy capacity). The result is a supercapacitor with the highest areal capacitance (electric charge storage per unit of area) recorded to date and a "remarkable" energy density compared with other types of capacitors. The breakthrough could open avenues to using supercapacitors as ultrafast-charging power sources for devices such as cellphones, laptops and other smaller electronics.

While capable of charging extremely quickly (requiring just a few minutes or seconds to reach full capacity) and retaining their performance even after thousands of charging and discharging cycles, supercapacitors are rarely used as batteries because of their relatively small energy density (storage capacity). But by 3D printing graphene aerogel scaffolds and loading the structures with the pseudocapacitive material MnO2, researchers said they’re effectively packing more energy storage capacity into a relatively small area. The advancement, they said, addresses the typical energy storage vs. discharging/charging rate tradeoff for supercapacitors and approaches energy densities equal to that of some conventional batteries.

"We’re trying to get the best of both worlds," said LLNL materials engineer Eric Duoss. "The remarkable part about this work is that all that surface area is accessible and active, so you get amazing volumetric and gravimetric properties and have things that can now take on a shape or form factor for a certain application environment. These capacitive materials are really unprecedented in that they can be enormously thick, relatively speaking, yet have record-setting performance characteristics."

The UCSC team used a chemical deposition method to load the porous 3D-printed structures developed at LLNL with up to 180 milligrams of MnO2. While this kind of mass loading typically leads to degraded performance due to sluggish ion diffusion, by depositing the pseudocapacitive material inside and outside the structures, researchers were able to reach unprecedented levels of loading — about 10-100 times more than others have achieved — without compromising performance. Researchers said the feat would be impossible through traditional manufacturing and points toward more commercially feasible energy storage materials for a broad range of applications.

"Pseudocapacitive materials can increase the total charge stored in the material, so the motivation behind coating the pseudocapacitive manganese oxide is to increase the total capacitance and energy density," said co-author and UCSC professor of chemistry and biochemistry Yat Li. "We fully utilized the large surface area of graphene aerogel (with this method) instead of coating selectively on the external surface of the 3D-printed structure…The important part is this is still not the limit. Really the breakthrough is that this whole thing is scalable; we’re still not seeing a plateau. We can go further. This is only the first step." 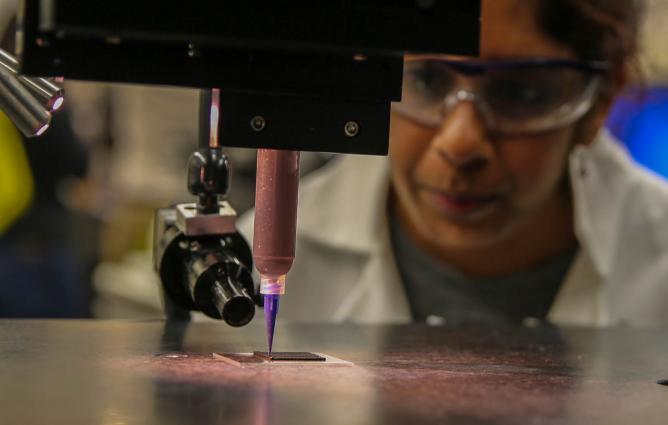 Traditionally, supercapacitor electrodes are built with thin, carbon-based films. To reach higher capacitance and energy density, engineers must stack multiple thin-film electrodes together, adding weight and costs. However, the excellent ion diffusion demonstrated in the LLNL/UCSC 3D-printed supercapacitor electrodes suggests they could be made thicker without affecting performance, researchers concluded. Significantly, researchers also discovered the areal capacitance increased linearly along with the loading of MnO2 and electrode thickness, suggesting widespread commercial potential and indicating that 3D printing an entire electrode at once could revolutionize the way supercapacitors are made.

"Our 3D-printed structures are not limited by accessible surface area because we have a lot of accessible macropores," said UCSC graduate student and co-lead author Bin Yao. "These pores are very important for the deposition of manganese oxide and for efficient ion diffusion. We can have a very thick electrode but still retain good conductivity and ion diffusion. Usually, as you get thicker and thicker, the capacitance will reach a plateau, especially at a high charging rate. But with a 3D structure, we can enable a good utilization of a higher charge. Even if we increase the thickness, it won’t change the gravimetric value."

"The advantage to 3D printing is we can tailor the pore size, we can adjust the parameters that you want it to be and we can fabricate these electrodes pretty quickly," added co-first author and LLNL materials scientist Swetha Chandrasekaran. "We can vary the size and we can print larger structures. We also could change the porosity just by engineering the architecture."

The Joule study follows up on a 2016 paper in which the LLNL/UCSC team reported that 3D-printed supercapacitors built with graphene aerogel were able to retain energy on par with those made with electrodes 10 to 100 times thinner and could be utilized as highly efficient energy storage systems for smartphones, wearables, implantable devices, electric cars and wireless sensors.

While the latest paper focuses on performance of symmetric supercapacitor devices, which utilize two identical pieces of 3D-printed electrodes, researchers envision future work on developing asymmetric devices using ultrahigh loading of active materials. These devices would use two different materials on each electrode and could further increase the working voltage and energy density.