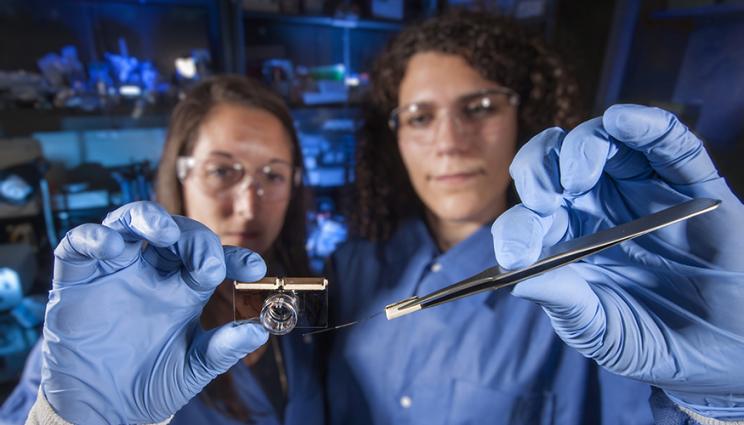 A new study in which Lawrence Livermore National Laboratory scientists compared drug responses in the brains of rodents to drug responses of brain cells cultured in Lab-developed “brain-on-a-chip” devices may be a critical first step to validating chip-based brain platforms. Photos by Randy Wong/LLNL

In the study, published online today in the journal Scientific Reports, LLNL scientists gave freely moving rodents two different drugs, atropine and ketamine, and recorded their neural activity using LLNL-fabricated multielectrode arrays implanted in their brains. They compared the neuronal spiking and bursting patterns with data gathered from LLNL’s brain-on-a-chip device, an in vitro (outside of the body/organism) platform consisting of purified rat neurons cultured on a multielectrode array, developed as an alternative to human testing for pharmaceutical drugs or chemical agents.

The researchers observed differences in baseline neural firing activity between the neural interfaces and chip-based systems, similar responses in spiking activity using atropine, and greater sensitivity to ketamine in cells cultured in chip-based devices than those seen in the rodents’ brains. Researchers cautioned the study isn’t a comprehensive validation, but rather an important initial step toward a more thorough comparison between in vivo (inside of the body/organism) and in vitro responses.

"What this shows is that there are situations where using a really simple in vitro model is perfectly adequate to answer questions, but there are other cases where you need a more complex model," said LLNL research engineer and co-lead author Anna Belle. "This is creating a legend, or a map between the two, with the idea being that if you understand that translation enough, someday when we make organs on chips we don’t also have to expose people to the dangerous or unknown chemical, but we could predict how humans would actually react."

The researchers concluded that for drugs like ketamine, which causes effects by interacting with several different types of cells in the brain, simple single cell-type chip-based devices may not fully capture the responses found in vivo. For other classes of drugs, however, an organ-on-a-chip device can provide  useful data to inform relevant conclusions.

"A growing number of researchers and pharmaceutical companies are using chip-based neuronal systems for screening new compounds," said LLNL researcher and co-lead author Heather Enright. "Validations of this type will be increasingly necessary to determine whether to move on to further stages of development." 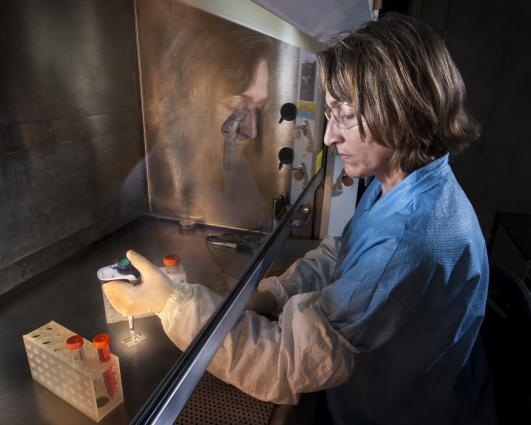 "Being able to identify where that information is valuable in your pipeline or what information is going to be directly relatable to some of those more advanced animal studies is important," Enright said. "There’s a lot of focus in creating these in vitro systems, which definitely has benefits especially for human assessment, but unless you’re able to benchmark how it’s actually going to truly relate to an in vivo system, it’s going to be hard to extract and interpret that data."

Researchers said the differences in neural activity demonstrated between the in vivo neural recordings and in vitro chip-based devices could be explained by the lack of supporting brain cell types cultured on the chip, varied metabolism, cell ratios, differences in GABA levels in the brain and effects involving parts of the brain other than the prefrontal cortex, where the multi-electrode devices were implanted in the rodents.

Whereas atropine is a well-characterized anti-seizure medication, ketamine is a dissociative drug commonly used as an anesthetic that exhibits a complicated pharmacological mechanism at different dosages while also affecting multiple parts of the brain. The researchers said the next step in the research is to evaluate the same chemicals in a more complex in vitro system that incorporates additional supporting cell types, adding that the study could be used to optimize three-dimensional brain-on-a-chip devices that Lab researchers are currently developing.

"As we increase the complexity of these devices and make advances in engineering and biology, we can test the same drugs and make those comparisons," Enright said. "This study highlights that you can get beneficial information from very simple systems, and as the community continues to work in this area, the expectation is that you’re going to get more relevant data with the increasing complexity of these systems. I think that’s really exciting."

"There are a lot of critics who question the relevance of studies where cells are taken out of the body and isolated. They think it’s a waste of time, or it’s a trendy new thing that engineers and scientists want to build that isn’t useful," Belle added. "This is showing that this technology is moving toward something more relevant, even in these basic, early forms of organ-on-a-chip."

Ultimately, the researchers are working to develop an in vitro system to both provide a relevant experimental model for chemical testing while also generating relevant data to inform computational models reflecting these key differences between the in vivo and chip-based methods of neural data collection. In turn, these models could inform a predictive response for human individuals to drugs or other chemical compounds.