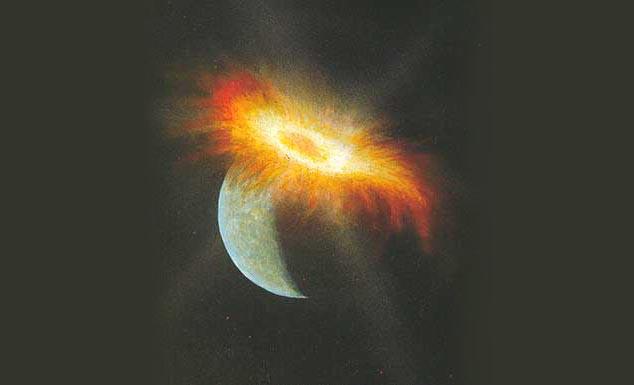 This artist’s illustration shows a planetary scale impact on the Moon. Illustration by W.K. Hartmann.

Research gets to the core of Earth's formation

Violent collisions between the growing Earth and other objects in the solar system generated significant amounts of iron vapor, according to a new study by LLNL scientist Richard Kraus and colleagues.

The results show that iron vaporizes easily during impact events, which forces planetary scientists to change how they think about the growth of planets and evolution of our solar system.

For planetary scientists, one of the most important and complex research areas is predicting how planets form and evolve to their current state. Generally speaking, planets form by a series of impacts, with the speed of the impacts being slow at first, a few miles per hour, but then faster as the planets grow larger, up to 100,000 miles per hour.

At the end stages of formation, when the impact speeds are high and the material conditions are extreme (high temperatures and pressures), planetary scientists don't have great models for how to describe what happens to the colliding bodies. 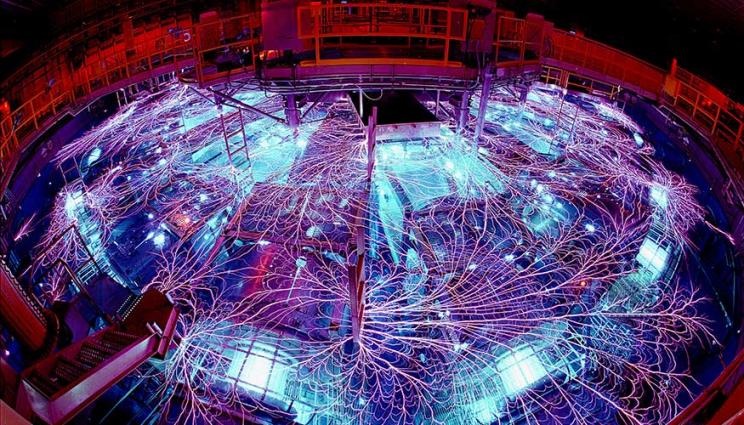 "One major problem is how we model iron during impact events, as it is a major component of planets and its behavior is critical to how we understand planet formation," Kraus said. "In particular, it is the fraction of that iron that is vaporized on impact that is not well understood."

Using Sandia National Laboratory’s Z-Machine, the team developed a new shock-wave technique to measure an important material property — the entropy gain during shock compression. By measuring the entropy, they determined the critical impact conditions needed to vaporize the iron within objects that collide with the growing Earth.

The scientists found that iron will vaporize at significantly lower impact speeds than previously thought. This translates to more iron being vaporized during Earth’s period of formation.

"This causes a shift in how we think about processes like the formation of Earth's iron core," Kraus said. "Rather than the iron in the colliding objects sinking down directly to the Earth's growing core, the iron is vaporized and spread over the surface within a vapor plume. After cooling, the vapor would have condensed into an iron rain that mixed into the Earth’s still-molten mantle.

"The timing of Earth’s core formation can only be determined via chemical signatures in Earth’s mantle, a technique that requires assumptions about how well the iron is mixed. This new information actually changes our estimates for the timing of when Earth’s core was formed," Kraus added.

The research appears in the March 2 online edition of the journal, Nature Geosciences. Other collaborating institutions include Sandia National Laboratory, and University of California, Davis.

Physics and Life Science
Oxygen to the Core
New research re-creates planet formation, super-Earths and giant planets in the…