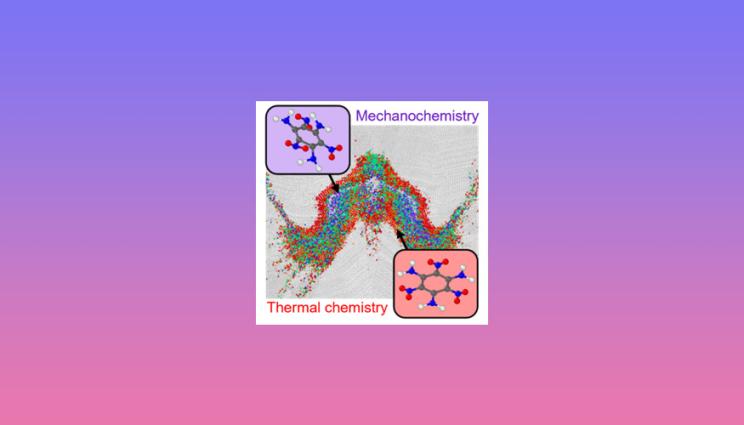 Reactive molecular dynamics simulations predict that a complicated distribution of molecular states is generated in explosive hotspots formed under shock conditions. Distinct classes of molecular states are indicated by color. Deformations of molecule shape are found to accelerate chemical reactions in a similar way as increasing temperature, explaining why hotspots react faster than expected.

Scientists at the Lawrence Livermore National Laboratory (LLNL) Energetic Materials Center and Purdue University Materials Engineering Department used simulations performed on the LLNL supercomputer Quartz to uncover a general mechanism that accelerates chemistry in detonating explosives critical to managing the nation’s nuclear stockpile. Their research is featured in the July 15 issue of the Journal of Physical Chemistry Letters.

Insensitive high explosives based on TATB (1,3,5-triamino-2,4,6-trinitrobenzene) offer enhanced safety properties over more conventional explosives, but physical explanations for these safety characteristics are not clear. Explosive initiation is understood to arise from hotspots that are formed when a shockwave interacts with microstructural defects such as pores. Ultrafast compression of pores leads to an intense localized spike in temperature, which accelerates chemical reactions needed to initiate burning and ultimately detonation. Engineering models for insensitive high explosives — used to assess safety and performance — are based on the hotspot concept but have difficulty in describing a wide range of conditions, indicating missing physics in those models.

Chemical reactions generally accelerate when the temperature is increased, but there are other potential mechanisms that could influence reaction rates.

“Recent molecular dynamics simulations have shown that regions of intense plastic deformation, such as shear bands, can support faster reactions,” explained LLNL author Matthew Kroonblawd. “Similar accelerated rates also were observed in the first reactive molecular dynamics simulations of hotspots, but the reasons for the accelerated reactions in shear bands and hotspots were unclear.”

The main advantage and predictive power of molecular dynamics simulations come from their complete resolution of all the atom motions during a dynamic event.

“These simulations generate enormous quantities of data, which can make it difficult to derive general physical insights for how atom motions govern the collective material response,” said Ale Strachan of Purdue University.

To better grapple with this big data problem, the team turned to modern data analytic techniques. Through clustering analysis, the team found that two molecular state descriptors were connected to chemical reaction rates. One of these is the temperature, which is well-understood from traditional thermochemistry. The other important descriptor is a newly proposed metric for the energy associated with deformations of molecule shape, that is, the intramolecular strain energy.

“At ambient conditions, TATB molecules adopt a planar shape,” said Brenden Hamilton of Purdue University, “and this shape leads to a highly resilient crystal packing that is thought to be connected to TATB’s unusual insensitivity.”

The team’s clustering analysis revealed that molecules in a hotspot that are driven from their equilibrium planar shape react more quickly; mechanical deformations of molecules in regions of intense plastic material flow lead to a mechanochemical acceleration of rates.

Mechanically driven chemistry (mechanochemistry) is known to operate in many systems, ranging from precision manipulation of bonds through atomic force microscopy “tweezers” to industrial-scale ball milling.

The mechanochemistry that operates in shocked explosives is not directly triggered, but results from a complicated cascade of physical processes that start when a shock induces plastic material deformations.

The work provides clear evidence that mechanochemistry of deformed molecules is responsible for accelerating reactions in hotspots and in other regions of plastic deformation, such as shear bands.

“This work provides a quantitative link between hotspot ignition chemistry and the recent 2020 LLNL discovery of shear band ignition, which provides a firm basis for formulating more general physics-based explosive models,” Kroonblawd said. “Including mechanochemical effects in explosives models will improve their physical basis and allow for systematic improvements to assess performance and safety accurately and reliably.”