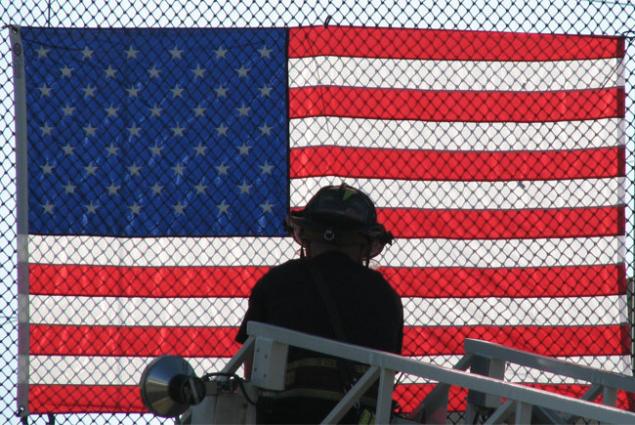 Firefighter Ken Rinna, attaches a new flag to the fencing at the northwest entrance to the Superblock. Photos by Julie Korhummel/PAO

Mark Martinez (left) presents George Miller with a plaque signed by members of the Superblock. 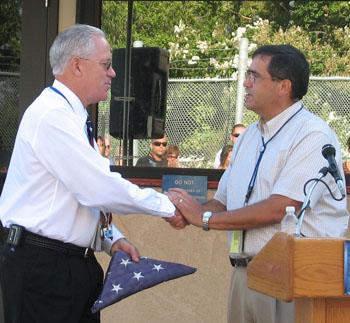 What has become a solemn Lab tradition, a brief yet poignant ceremony was held Monday near the Superblock to commemorate the lives lost on Sept. 11, 2001 in New York City, the Pentagon, Washington D.C. and Pennsylvania.

"Please pray for those who carry on without their loved ones," Chris Holm of the Superblock said during the program's introduction.

The flag displayed at the northwest entrance to the Superblock was changed by firefighter Ken Rinna, who accepted a new flag from members of the Lab's Protective Force Division's honor guard.

This year the flag previously flown was presented to Holm for his efforts. Holm who will be retiring from the Lab this year, is credited with initiating the annual ceremony at the Superblock.


Special recognition was given to Lab Director George Miller by Mark Martinez for "fighting on behalf of us and our nation." Miller was presented the flag that flew over the Lab Sept. 11, 2011 as well as two plaques -- one honoring his support and another signed by members of the Superblock.

"Thank all of you for everything you do every day to contribute to the safety our nation," Miller said. "This flag means a lot. These gifts are very special."