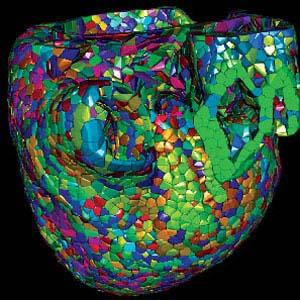 The Cardioid code, developed by a team of Livermore and IBM scientists, divides the heart into a large number of manageable pieces, or subdomains. 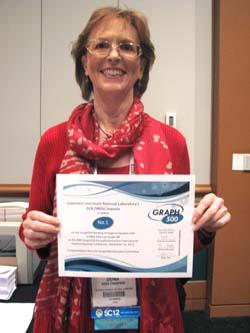 The rapid evolution of supercomputing displayed at SC12

If the annual supercomputing (SC) conference proves anything, it is that high performance computing technology changes with stunning speed. But then, the purpose of SC is to galvanize the forces that bring about that change.

SC12, held in Salt Lake City, was no exception. Sequoia, the 16.3 petaflops (quadrillion floating point operations per second) IBM BlueGene/Q system at LLNL, dropped to No. 2 on the industry standard Top500 list of the world's fastest supercomputers. The new title holder is Titan, a 17.89 petaflop Cray system, at Oak Ridge National Laboratory in Tennessee.

"The rapid evolution of high performance computing should come as no surprise," said Dona Crawford, associate director for Computation. "The leadership role LLNL plays in supercomputing contributes significantly to the new developments in HPC highlighted at SC."

Sequoia nonetheless retained its No. 1 Graph 500 ranking, showcasing its ability to conduct analytic calculations or finding the needle in the haystack by traversing 15,363 giga edges per second on a scale of 40 graph (a graph with 2^40 vertices). The system's capability also played a role in one of the conferences most watched competitions, the Gordon Bell Prize. Two of the final five submissions used Sequoia: a simulation of the human heart's electrophysiology using a code called Cardioid, developed by a LLNL/IBM team; and a cosmology simulation led by  Argonne National Laboratory. In spite of these impressive calculations, the Gordon Bell prize was won by a team from Japan for an astrophysical N-body simulation run on the K supercomputer.