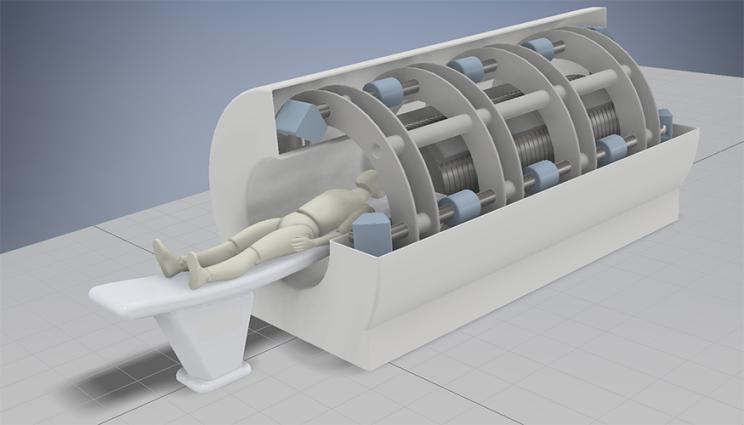 An artist’s concept rendering of a 3.5-meter linear induction accelerator (LIA) with four lines-of-sight toward a patient. The blue elements magnetically focus and direct the LIA’s electron beams.

Researchers at Lawrence Livermore National Laboratory (LLNL) have shown for the first time the potential for linear induction accelerators (LIAs) to deliver effective, targeted doses of “FLASH” radiation to cancer patients. The new technique selectively kills cancer cells with minimal damage to healthy cells. The approach is outlined in a Scientific Reports paper.

For decades, cancer treatment has often meant weeks of low-dose radiation in hopes of delivering enough to malignant cells without too much damage to the patient’s healthy cells. Efforts to deliver a rapid, high, targeted dose of therapy radiation, or FLASH radiotherapy (FLASH-RT) at the required depth, have required large, complex machines the size of gymnasiums and have so far proven impractical for clinical use. In the Scientific Reports paper, the authors note that LIAs powerful enough to deliver the necessary dose rate to cancer cells can be built only 3 meters long.

Developed as part of the Laboratory’s stockpile stewardship program, powerful LIAs have been in use at LLNL since the 1960s in nuclear and stockpile experiments. Standard RF and microwave accelerators were not sufficiently powerful. At Site 300, the Nevada Test Site and Los Alamos National Laboratory, large versions of these accelerators are used to deliver flashes of radiation, some in a sequence to produce a motion-picture “flipbook” of a simulated nuclear implosions. Both of these uses in LLNL’s weapons program, said Laboratory scientist and lead author Stephen Sampayan, have underpinned its potential use in cancer therapy. Although LIAs have been in use for decades, he said they were not previously considered for use in clinical applications, as the industry is unfamiliar with LIAs and devices can sometimes be rather large.

“You’re combining technologies that were developed for weapons — either diagnostics or weapon design itself — and spinning off something that could potentially be a major breakthrough in cancer radiotherapy,” he said.

The paper outlines the status of LIA technology, the relevant physics and the research team’s efforts to stabilize the electron beam. In FLASH-RT, a minimum dose rate of > 40 Gy s−1 (a measurement of the amount of radiation delivered over a span of time) has been previously shown to be effective,with maximum effect at > 100 Gy s−1 to ensure the healthy-tissue-sparing effects. But what also is important is an instantaneous dose rate > 2 x 105 Gy-s-1, which is well out of the reach of conventional accelerators, Sampayan said. Evidence has mounted that a higher instantaneous dose rate is even more effective, while keeping the patient’s time under radiation as low as possible.

To create a dose high enough to kill cancer cells but short enough to avoid damaging healthy cells, the LLNL team developed an approach involving an LIA that produces four beamlets placed symmetrically around the patient. By controlling the magnets, the researchers can focus a steerable FLASH-RT beam that could prove transformative in oncology. Further research may show that LIA FLASH-RT in a clinical setting is effective not only against concentrated cancers like tumors, but potentially also distributed cancers, such as those in the brain or in blood.

Additional Laboratory scientists involved with the paper were George Caporaso, Yu-Jiuan Chen, Steve Falabella, Steven  Hawkins, James Watson and Jan-Mark Zentler, along with Kristin Sampayan of Opcondys Inc. and Jason Hearn of the University of Michigan’s Department of Radiation Oncology.