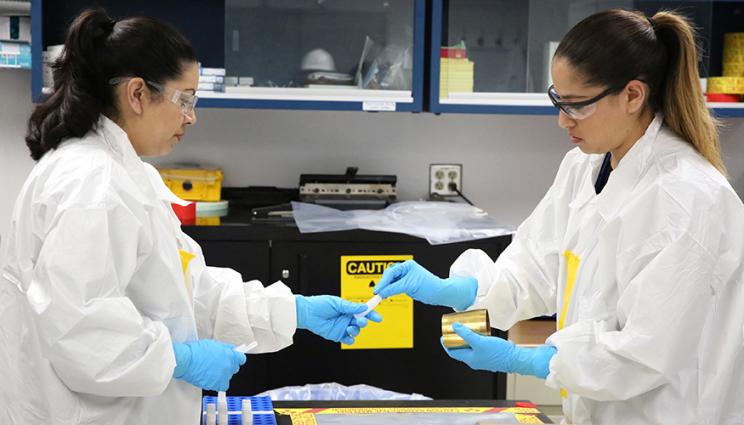 Judy Zarco and Myrna Gutierrez took advantage of Lawrence Livermore National Laboratory's legacy of encouraging continuing education to get the necessary degrees and training to advance their careers at the Lab. As radiation control technicians, they help maintain safety at the National Ignition Facility. Photos by Kate Hunts/LLNL

It is 6:30 a.m. when Myrna Gutierrez and Judy Zarco suit up inside the National Ignition Facility (NIF) to begin their 13-hour shift. As radiation control technicians (RCTs), they will maintain the safety of a 10-story building the size of three football fields housing the world’s largest, most energetic laser. It is not an average workplace, and the stakes are high when teams of researchers from around the world are counting on them for support. Despite little room for error, Gutierrez and Zarco will say this is where they want to be, and their journey from clean room custodians to RCTs demonstrates their dedication to advancing their careers and contributing to Lawrence Livermore National Laboratory's (LLNL) mission. 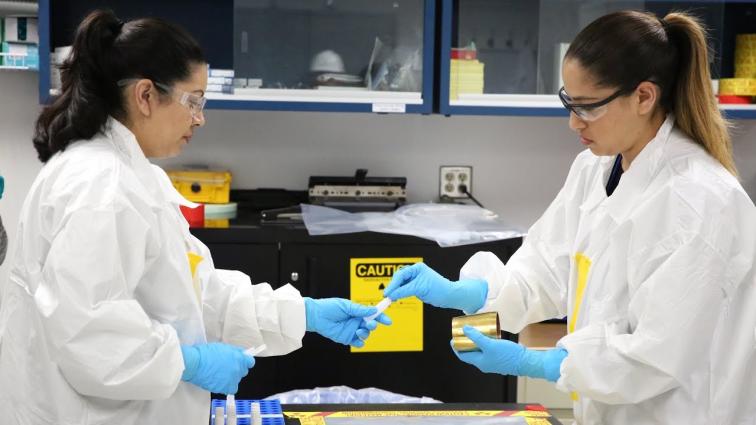 In 2010, NIF was transitioning to a radiological facility, requiring new radiological waste disposal and maintenance crews. RCTs are usually hired from outside the Lab either from the military or from other nuclear facilities, but the large need opened a door for anyone who wanted to volunteer to train for the specialty. Gutierrez and Zarco were working as clean room custodians and saw this as a unique opportunity to learn more about the position and asked their supervisor what they could do to move up.

"I went forward with it because they had the right attitude," said NIF Radiation Safety Officer Richard Beale. "This was an opportunity to learn things that they wouldn’t be able to anywhere else. Their great work ethic and positive attitude put them at the top of our trainee list."

Gutierrez and Zarco began a two-year full-time radiation safety program at Las Positas Community College, taking courses from hazardous material to physics, biology and chemistry as well as attending RCT training at NIF all while working 13-hour shifts. On top of the demanding schedule, Zarco was pregnant with her now 21-month-old daughter Adelina.

"I want my daughter to see that it’s important for women, even after having children, to stay focused and work on their education," Zarco said. "Juggling work and school was challenging, but it was something that I wanted to accomplish."

"I took it one day at a time," Gutierrez said. "I had to say no to a lot of things. Everyone at the Lab including management was encouraging. Having Judy there along the way was very helpful, too, because we motivated each other."

The world’s most energetic laser became a classroom where they could learn on the job. Senior RCTs helped by answering questions and invited them to be assistants in the field. Coupling real-world experience with the classroom helped them understand concepts while building relationships with the existing team. The two technicians are the only women on the crew, but integration was easy because everyone had seen how hard they worked to master the trade. "They are respected for their skills and their knowledge," Beale said. "Everyone knew they could count on them and were part of the team. They are better junior RCTs than most I’ve seen." 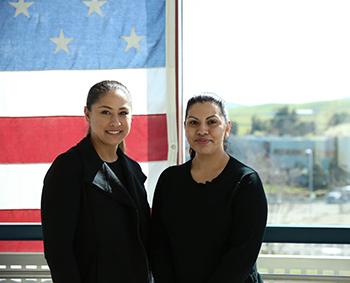 LLNL has a legacy of encouraging continuing education and tries its best to accommodate employees’ schedules if class time interferes. The Lab rewards eagerness to learn and the goodwill of coworkers is not in short supply. "There’s always great room for career growth for anyone with that attitude because they’re willing to learn and work hard," Beale said. "It makes coming to work fun. It’s natural to want to help people like that improve themselves."

"The Lab encourages employees to further their education. They offer a great support system," Zarco said. "It was important to have the Lab’s support and have someone like Richard encouraging and advocating for us along the way. It shows other people that they can do it, too."

Gutierrez headed back to the classroom seeking a bachelor's of science degree in environmental health and safety from Oakland University and is expected to graduate April 2018. She recently received a $1,400 scholarship from the Lawrence Livermore Laboratory Women’s Association and hopes to begin a master’s degree. "After going through this journey, I have a lot of confidence and motivation," Gutierrez said. "I can apply this to so many things outside of school."

Zarco is completing her associate’s degree in occupational safety and health. She plans on completing her bachelor’s degree next. "I’m proud of myself for being able to do this, and there’s more that I’m hoping to accomplish in the future," Zarco said.

"RCT is just a stepping stone for them," Beale said. "Ten years down the line when one of them is my boss, I’ll be fine with it. I don’t think there’s a limit to how well they can do at the Lab."