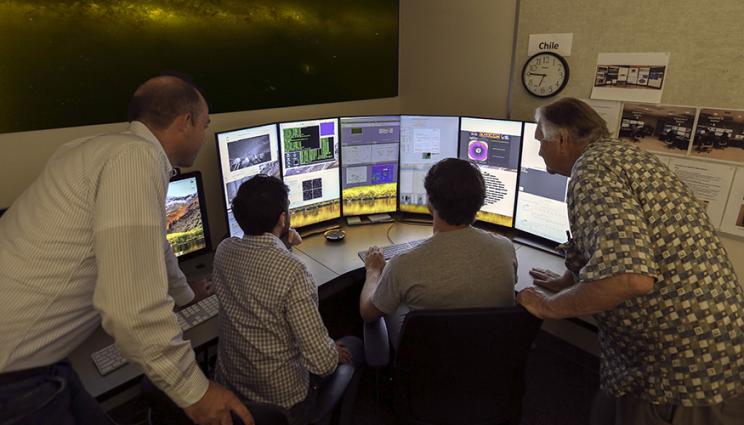 Like a game of "hide and seek," Lawrence Livermore astrophysicists know that there are black holes hiding in the Milky Way, just not where.

Typically to observe the Magellanic Clouds, scientists must travel to observatories in the Southern Hemisphere.

But recently, the LLNL team got a new tool that’s a little closer to home to help them in the search. As part of the Space Science and Security Program and an LDRD project, LLNL has a new telescope remote observing room.

The team is using the observing room to conduct a gravitational microlensing survey of the Milky Way and Magellanic Clouds in search of intermediate mass black holes (approximately 10 to 10,000 times the mass of the sun) that may make up the majority of dark matter.

The visible universe is composed of approximately 70 percent dark energy, 25 percent dark matter and 5 percent normal matter. However, dark matter has remained a mystery since it was first postulated in 1933. The MACHO Survey, led by Lawrence Livermore in the 1990s, sought to test whether dark matter was composed of baryonic massive compact halo objects (MACHOs).  The survey concluded that baryonic MACHOs smaller than 10 solar masses could not account for more than 40 percent of the total dark matter mass.

Recently, the discovery of two merging black holes has renewed interest in MACHO dark matter composed of primordial black holes (formed in the early universe, before the first stars) with approximately 10 to 10,000 solar masses. This is an idea first proposed in 1975 by LLNL physicist and project co-investigator George Chapline. The most direct means of exploring this mass range is by searching for the gravitational microlensing signal in existing archival astronomical imaging and carrying out a next-generation microlensing survey with state-of-the-art wide-field optical imagers on telescopes 10 to 25 times more powerful than those used in the original MACHO surveys.

Microlensing is an astronomical effect predicted by Einstein’s general theory of relativity. According to Einstein, when the light emanating from a star passes very close to another massive object (e.g., black hole) on its way to an observer on Earth, the gravity of the intermediary massive object will slightly bend and focus the light rays from the source star, causing the lensed background star to appear brighter than it normally would.

"We are developing a novel means of microlensing detection that will enable us to detect the parallactic microlensing signature associated with black holes in this mass range," Dawson said. "We will detect and constrain the fraction of dark matter composed of intermediate mass black holes and measure their mass spectrum in the Milky Way."

While the scientists are currently using the Cerro Tololo Inter-American Observatory in the search, eventually they will achieve even more sensitivity in observing black holes when the Large Synoptic Survey Telescope, which LLNL has supported for the last two decades, comes online in 2022.