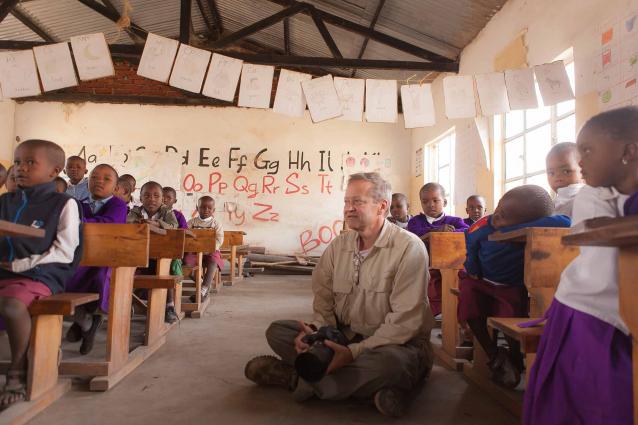 Lab employee Mike Carter visits with a classroom as part of the Asante Africa foundation. 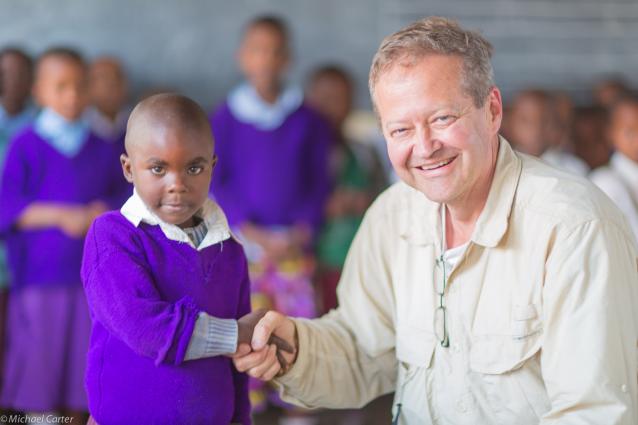 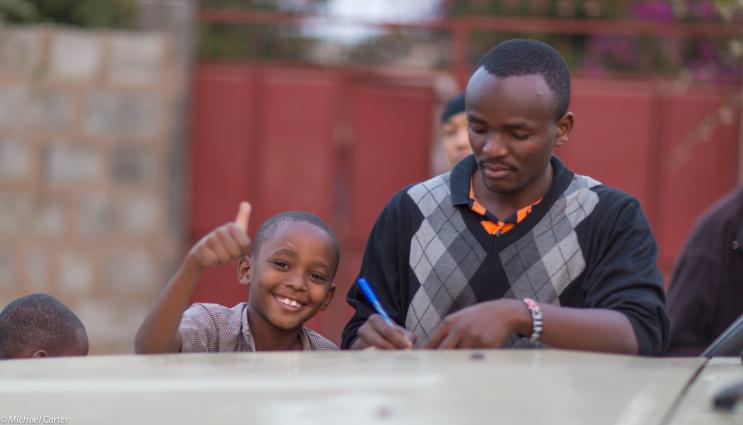 Carter was particularly taken by a 7-year-old boy named Benson he met in Boma, a town near Kilamanjaro. "This kid had a spark in his eye and charm. He was well spoken, inquisitive and smart," he said. "You could just tell that with a little help, he could make something of his life. He just had that drive."

A quest to expand educational opportunities in rural East Africa

Editor's Note: This is one in a series of articles about Lawrence Livermore National Laboratory employees who volunteer for various non-profit agencies. Some of these agencies are available for employees to donate to through the Helping Others More Effectively (HOME) Campaign. This is just a sampling.

As is appropriate for a photographer, Mike Carter's trip to Africa in July was a study in contrasts. Not only was there the interplay of light and texture that are the essence of photography, there was the contrasts of fortunes found in rural Kenya and Tanzania - experiences evoking a full range of emotions.

Carter made the trip as a back-up photographer for a video project on the work of the Asante Africa Foundation, a non-profit educational organization founded by former Lab employee Erna Grasz and for which he serves as a board member.

"A Journey from Ordinary to Extraordinary," contrasts the life path of rural children who've received an education and those who have not. The film will debut this Saturday, Nov. 9 in Oakland at Asante Africa's annual Fall Event.

"The idea is to show the value of education and the difference it makes in the lives of those fortunate enough to go to school," Carter said in a presentation to employees. "In rural East Africa the contrasts are stark."

Though he has traveled extensively in the course of his national security assignments for LLNL, this journey to East Africa was nonetheless daunting. A long time student of photography who has studied with seasoned professionals, Carter was taking his commitment to photography to a new level. "The transition is in front of me," he wrote in his blog during his July flight to Frankfurt. "Can I move from taking pictures to making pictures? Can I move from proficient to creative?"

The trip was "a hands-on chance of a lifetime," Carter wrote, noting it was an opportunity to further develop his skills in photography with a "master" -- Heward Jue, videographer and producer of the video debuting this weekend.

The 10 days in the field he spent with the video crew took him well off the typical tourist routes into the heart of East Africa. The group's bus was regularly stopped and asked to pay 'tolls' of sorts though, as Carter discovered, these were negotiable as are many aspects of life in this part of the world. "Everything in Africa is a negotiation with someone," he said.

The journey took him through rural Kenya into Tanzania, though Maasai country then back to the base of Mt. Kilamanjaro.

The schools they visited were as often as not small one-room structures with none of the educational resources typical of schools in the West -- desktop computers, textbooks and reams of paper. A simple blackboard and chalk was often all that was to be found. Rural schools often had but one teacher teaching multiple grade levels. Yet, Carter found the children in these schools to be very spirited, curious and "full of life." They loved to look at the photos Carter took of them.

The challenge in the tribal areas of rural Africa is keeping children, especially girls, in school. Per tribal custom, girls aged as young as 12 are often "sold off" as wives in exchange for cattle, the number of which are a sign of wealth in rural areas. The lack of privacy in rural schools is also an impediment to pubescent girls continuing their education. They often miss so much school they fall too far behind to catch up.

This is one of the problems Asante is working to address by working with schools to provide privacy, working with families to convince them of the advantages an education can offer and providing scholarships for promising students.

Boys often leave school at early age because of the pressure to go to work to help support the family. "Often the eldest boy will be educated, but the others will go to work supporting the family," he said. "Most families don't have the means to educate all their children."

Despite the abject poverty and starkness of daily life, Carter saw potential in children everywhere he traveled. "I kept thinking about what President Bill Clinton once said: 'talent and intelligence might be spread evenly, but opportunity is not.'"

Carter was particularly taken by a 7-year-old boy named Benson he met in Boma, a town near Kilamanjaro. "This kid had a spark in his eye and charm. He was well spoken, inquisitive and smart," he said. "You could just tell that with a little help, he could make something of his life. He just had that drive."

Benson told Carter he wanted to become an airplane pilot. But he came from a family with no means. His father was killed in a motorcycle crash and his mother left him and his 4 year old sister to be raised by their grandmother. The Asante team did a scholarship interview on the spot.

"You can go to all the board meetings, read all the books and plans, hear all the talk and pretend you get it," Carter said. "But I didn't get it until I met Benson. He is exactly the kind of kid Asante Africa is looking for. He's smart and full of potential and despite extreme hardship, he is full of life. This young man deserves a chance."

"I'm not sure young people in our country and in the West understand the opportunities they've been born into," he wrote in his blog at the end of his trip. "Every once in a while we should just all set aside our modern distractions - video games, iPads, laptops and television - and appreciate what we have. The world is much richer than anything that can be rendered by the best 3-D video game."

For more about Carter's trip, see his chronicle.

The Asante Africa Foundation has a strong Laboratory connection. Asante was the brainchild of Erna Grasz, a former Engineering employee, and her husband Mark Newton, an assistant principal associate director for Operations at the National Ignition Facility and Engineering division leader. The inspiration for the foundation came during a trip to Kenya to climb Mt. Kilamanjaro.

Lab managers Nancy and Greg Suski's interest in helping children in Africa started when their son, Matthew, then in 8th grade, came home from school inspired by a speaker from an organization called "Invisible Children." They were focused on protecting children in Uganda from abduction into the Lord's Resistance Army. Matthew was "fired up to do something," Nancy said.

That passion for helping children eventually got the whole family involved in supporting other Africa organizations, including Asante. The Suski family traveled to East Africa with Grasz and visited a number of schools. As a result, Matthew, now a high school junior, adopted a primary school that had lost a roof on one of its buildings during a storm. He worked through his school, friends, family and church to raise the money to replace the thatched roof with a metal roof with enough left over fill the classroom with desks for the students.

For more, see the Newsline archive.

LLNL featured as a top STEM workplace by AISES