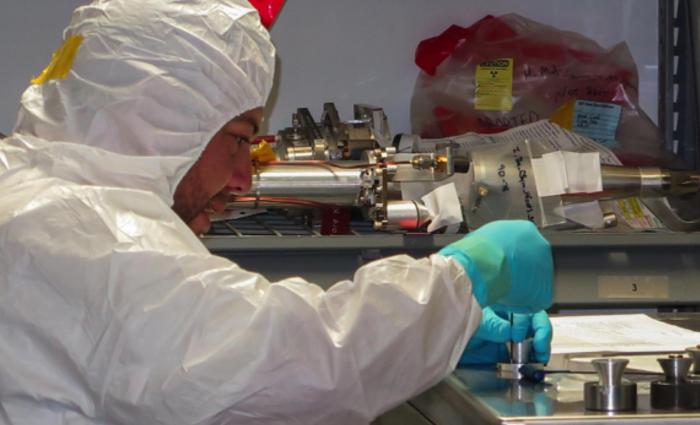 Fans of the popular TV series "CSI" know that the forensics experts who investigate crime scenes are looking for answers to three key questions: "Who did it; how did they do it; and can we stop them from doing it again?"

The field of nuclear forensics, an important element of LLNL’s national security mission, has similar goals and uses similar techniques — but with even higher stakes.

"In nuclear forensics, we want to know first, is someone able to put together the parts to make a nuclear weapon and set it off?" said LLNL nuclear chemist Dawn Shaughnessy, who leads the experimental and nuclear radiochemistry group in the Physical and Life Sciences Directorate. "And second, if one is set off, can we find out who did it, how they did it and are they going to do it again?

"Like traditional forensics, we’re looking for nuclear signatures, just like fingerprints; we’re looking for the technological and material clues and evidence to tell us what somebody had done to make this unfortunate thing happen." 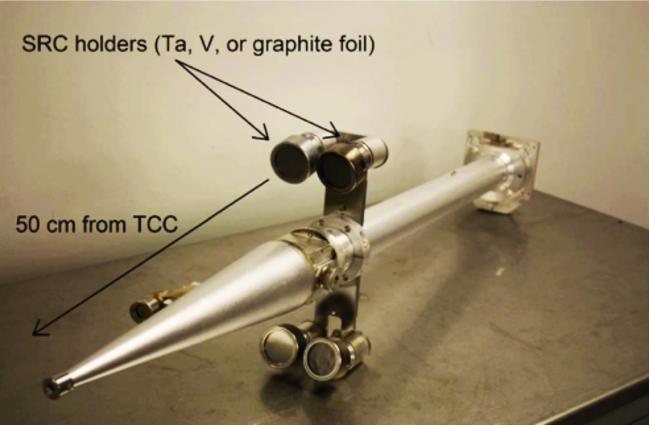 If a nuclear explosive was detonated on U.S. soil, nuclear forensics specialists would be dispatched to examine the rubble from the explosion for traces of fissile material, fission products and activation products — nearby debris or structural components of the bomb made radioactive by neutron activation. The more information the experts could glean by characterizing these materials, the better able they would be to determine the weapon’s design and origin.

NIF is playing a growing role in LLNL’s nuclear forensics work by providing radioactive samples from nuclear fusion experiments for analysis. "We’re looking for information about the nuclear decay of certain elements — and not just the actinides," Shaughnessy said. "We also need to know about the materials used to build a device by looking for isotopes and nuclear decay signatures to piece together what was physically there when an event occurred.

"For some isotopes that would be very useful signatures for us; we don’t have any data on their nuclear reaction pathways," she said. "For example, if a nuclear device was set off in a garage, the garage would have steel in it that would become radioactive, and that might help us figure out something related to the resultant neutron spectrum.

"NIF is a place where we can make these nuclear reaction measurements, and it may be the only place where some kinds of measurements are possible," she said. "The data we get at NIF — the reaction products from a NIF experiment — would be fed back to help us understand the origin of the nuclear weapon." 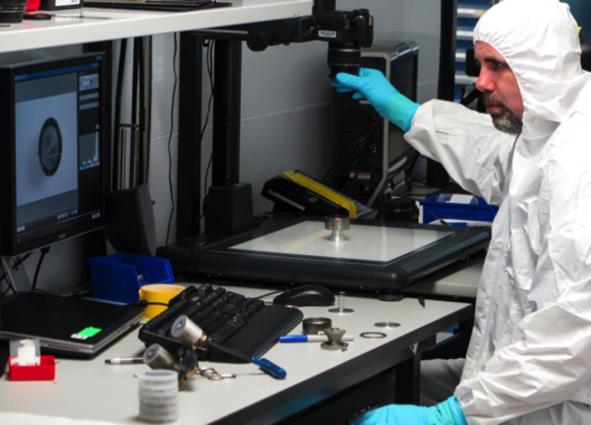 When the hydrogen isotopes deuterium and tritium are fused in a NIF experiment, neutrons of different energies, gamma rays and a variety of other radioactive byproducts are created, along with irradiated debris from the tiny NIF targets. Those samples can be captured and analyzed in LLNL’s unique Nuclear Counting Facility in Bldg. 151, yielding high-quality data to help determine the characteristics of the fusion experiment and also providing forensics specialists with materials similar to those they would encounter in an investigation of a nuclear explosion.

In the NIF experiments, thin foils containing materials of interest are placed on the outside of the target and the foils are activated by neutrons with similar energy as in a weapon explosion. "This gives us part of the puzzle," Shaughnessy said, "because the neutrons are at higher energy than in an accelerator." By using both accelerators, such as those in LLNL’s Center for Accelerator Mass Spectrometry (CAMS), and NIF, "we can get a complete reaction pathway for the whole neutron spectrum. NIF really is a very complementary facility to accelerators to cover the entire neutron spectrum."

The NIF team uses two primary diagnostics to collect reaction products of interest: the radiochemical analysis of gaseous samples (RAGS) system and the solid radiochemical collection (SRC) diagnostic. Mounted on the nose cone of a diagnostic instrument manipulator, the SRC collection plates sit 50 centimeters from the target. The plates collect the debris coming off the target that contains the reaction products.

"After the samples are collected, they’re brought to the Nuclear Counting Facility where we do both chemical processing and radiation counting," Shaughnessy said. "The results are analyzed and we try to determine the cross-section for the reaction — how often that reaction will proceed in a neutron environment.

"The nuclear forensics modeling community would like to have better nuclear reaction data for various materials," she said. "For example, they would like data on how structural components, such as the iron in that garage, interact with neutrons. The NIF experiments are focusing on materials for which they have the least amount of data. We need to understand, if there were activated iron components after the event, was that from the building or from the device itself?"

The first NIF nuclear forensics shot was conducted at the end of 2014. The second shot is scheduled for the end of this month and a third at the end of the current fiscal year. The SRC is currently being upgraded to enhance its collection efficiency; the new diagnostic, called vast area detector for experimental radiochemistry (VADER ), will be deployed for this month’s shot. 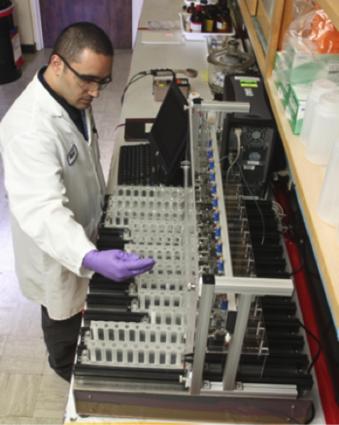 "This process is not very realistic," Shaughnessy said. "The data is fragmented and there’s no real interaction among the parts of the process." A truly realistic sample would include all the pieces of the puzzle — fuels along with reaction and activation products embedded in a matrix of dirt and debris.

"Based on the shots and data so far," Shaughnessy said, "it seems feasible to use NIF experiments as a test exercise for how we can interpret data in a post-event situation. We could use the NIF shot as a stand-in for an actual nuclear event. We could create a debris sample with a mix of nuclides and a mix of neutron fluxes, and hand it to the forensics team and ask them what the shot looked like. It would be the same forensics problem we’re trying to solve for the nation.

"This would require the same integrated laboratory processing, data analysis and modeling we’re trying to do in forensics on a larger scale," she said. "LLNL has a program to come up with more realistic exercises, and this would be a much better test of the whole integrated system."

By engaging in readiness exercises and sample development, Lawrence Livermore researchers are helping to establish an important national capability and fostering stronger partnerships with forensics specialists at other laboratories and with sponsors in the departments of Defense and Energy. The expertise developed by Shaughnessy’s group is broadening the scope of nuclear forensics research at the national level.