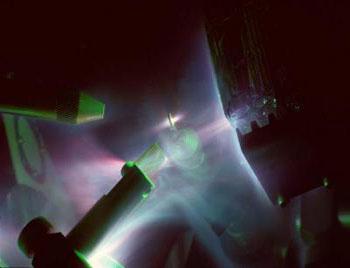 By focusing proton beams using high-intensity lasers, a team of scientists have discovered a new way to heat material and create new states of matter in the laboratory.

Using the Trident sub-picosecond laser at Los Alamos, the team generated and focused a proton beam using a cone-shaped target. The protons were found to have unexpectedly curved trajectories due to the large electric fields in the beam. A sheath electric field also channeled the proton beam through the cone tip, substantially improving the beam focus.

"These results agree well with our particle simulations and provide the physics basis for many future applications," said Mark Foord, one of the LLNL scientists on the team.

Bartal said the experiments provide a new understanding of the physics involved in proton focusing, which affects how proton beams can be used in the future -- from heating material to creating new types of matter that couldn't be made by any other means, to medical applications and insights into planetary science.

One example includes focusing a proton beam on a solid density or compressed material creating millions of atmospheres of pressure, allowing the study of the properties of warm dense matter found in the interior of giant planets such as Jupiter.

The UCSD team was led by Farhat Beg of Jacobs School of Engineering and several of his students participated in this experiment.

"This work has given a new direction to the conventional thinking of proton beam focusing in short-pulse laser matter interaction," Beg said. "Surely it will impact heating of pre-compressed materials to temperatures observed at the core of the sun and any future applications in proton oncology using high-intensity lasers."

Laser-produced proton beams also are making an impact on medical applications such as isotope production for positron emission tomography (PET) and proton oncology.