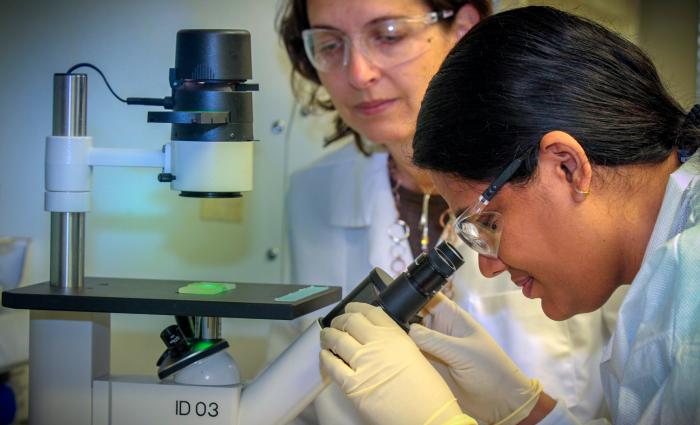 LLNL scientists Gaby Loots (left) and Aimy Sebastian count live cells for their research tying a specific protein that has been found to inhibit prostate cancer metastasis to bone. Photos by Julie Russell/LLNL.

Scientists from Lawrence Livermore National Laboratory, in collaboration with researchers from University of California campuses at Merced and Davis, have found that a specific secreted protein inhibits prostate cancer metastasis to bone.

Their research appears in recent editions of the journals, PLOS ONE and Microarrays.

Prostate cancer is the most frequently diagnosed cancer and the second leading cause of cancer-related deaths among men in the United States. If detected at early stages the prognosis is quite favorable; however, aggressive forms of metastatic prostate cancer spread primarily to the skeleton.

Bone tumors cause great pain, promote fractures and ultimately represent the main cause of morbidity, with a 70 percent incidence documented by autopsies, according to Gabriela Loots, an LLNL biomedical scientists and an associate adjunct professor at UC Merced. 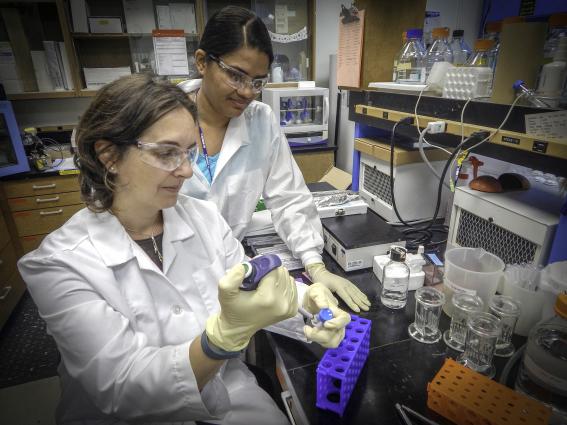 Yet a study led by Aimy Sebastian, a graduate student in the School of Natural Sciences at UC Merced and is conducting her Ph.D thesis work under Loots, identified the secreted bone protein Sclerostin (SOST) as a key molecule dysregulated as a result of prostate cancer-bone microenvironment interactions.

This study, published in the journal Microarrays, shows that lack of SOST in the bone microenvironment promotes the expression of many genes associated with cell migration and/or invasion, including long non-coding RNA MALAT1 in prostate cancer, suggesting that SOST has an inhibitory effect on prostate cancer invasion.

A second study, led by Bryan Hudson, a postdoc fellow, and LLNL biomedical scientist Nicholas Hum, looked into the role of SOST in regulating prostate cancer invasion and metastasis. They found that SOST inhibits prostate cancer invasion in vitro. To determine whether SOST impacts metastasis in animals, they modified a prostate cancer cell line to overexpress SOST, engrafted various cells lines onto immunodeficient mice, and quantified the rate of secondary tumors and of osteolytic bone lesions. They found that cells producing more SOST had significantly lower rates of metastasis. In addition, with the help of Blaine Christiansen, an assistant professor in the Department of Orthopedic Surgery at UC Davis, they found that cells expressing more SOST induced significantly less osteolytic bone loss. These results provided strong evidence that SOST has an inhibitory effect on prostate cancer metastasis to bone.

This work was supported by LLNL’s Laboratory Directed Research and a developmental grant from UC Davis Cancer Center.

Researchers track down cause of a disfiguring bone diseasease
Lab, UC Davis partner to personalize cancer medications
Bone research paper selected for inclusion in the Faculty of 1000 database