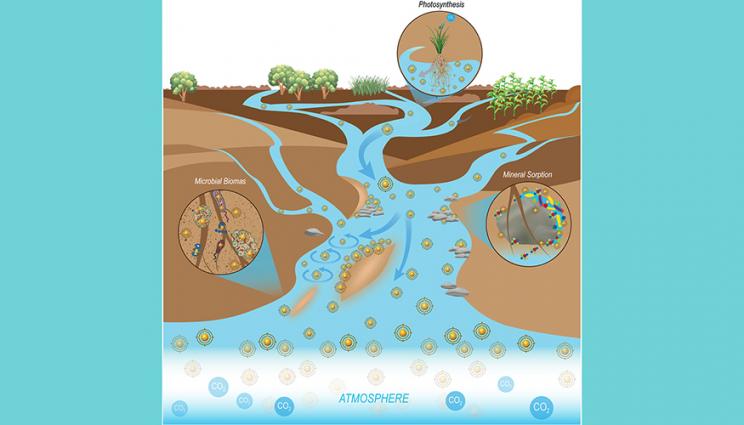 A conceptual analogy for PROMISE, which proposes that carbon cycling in soils is analogous to the movement of water in a river delta system. After being photosynthetically fixed by plants, carbon enters the river from different tributaries representing sources of organic matter, and discharges into the atmospheric reservoir of carbon dioxide. Between these two endpoints, the flow of carbon can be accelerated when decomposers are close to the organic molecules they are breaking down, or restricted by processes that resist carbon breakdown. Illustration by Janelle Cataldo/LLNL.

A PROMISE to trace the path of individual carbon atoms

Like water molecules in a river, soil carbon atoms are always in motion.

To better understand this action, Lawrence Livermore National Laboratory (LLNL) scientists and collaborators have created a new conceptual framework as well as a simulation model that traces the path of individual carbon atoms as they interact with the environment -- undergoing biochemical transformations, moving through the soil pore space and progressing toward their final fate -- carbon dioxide (CO2). The research appears in the journal Global Change Biology.

Soils store more carbon than the atmosphere and biosphere combined and the balance between soil organic carbon (SOC) formation and loss will drive powerful carbon climate feedbacks over the coming century.

The most common approach to predict SOC dynamics use pool-based models, which assume classes of SOC with internally homogeneous physical and chemical properties. But new evidence shows that soil carbon turnover is not dominantly controlled by the chemistry of carbon inputs, but by how it moves through its spatially and temporally heterogeneous environment.

Climate change results from a disturbance of the global carbon cycle, and soils play a pivotal role in regulating the Earth's climate system. Soils are a huge reservoir — but are under threat — due to intensifying agriculture, permafrost thaw, atmospheric warming, etc.

“In reality, SOC exists in a state of constant flux with new inputs of plant-derived carbon offset by continuous SOC losses through decomposition,” said LLNL scientist Jennifer Pett-Ridge, a co-author of the paper. “Even small shifts in the magnitudes of these changes impact the strength of the terrestrial carbon sink. We need to shift soil management toward approaches that conserve the carbon we have, add more, and ideally slow down the processes that lead to SOC loss.”

The PROMISE concept considers how SOC cycling rates are governed by the random processes that influence the proximity between microbial decomposers and organic matter, with emphasis on their physical location in the soil matrix. The team showed how the application of this new model traces the fate of individual carbon atoms as they interact with their environment, undergoing biochemical transformations and moving through the soil pore space.

“We think of carbon as always being in motion, like water molecules in a river. Sometimes they get stuck (like in an eddy at the edge of a river), but eventually they dislodge and move on toward their final fate — mineralization to CO2,” Pett-Ridge said. “In our simulation model, we can trace the fate of individual carbon atoms as they interact with their environment — like a particle moving down a river, getting stuck and then released back into the main flow — in a dynamic continuum.”

The PROMISE framework reshapes the dialogue around issues related to SOC management in a fluctuating world. The team said they want the framework to spur the development of new analytical tools and model structures across disciplines — including soil ecologists, biogeochemists, ecosystem modelers and mathematical biologists — that will illuminate physical controls on the flow of carbon between plant, soil and atmospheric pools.

“Ecosystems function because energy transfer does not stand still,” Pett-Ridge said. “By grappling with the dynamic nature of soil carbon, we can more effectively manage this critical resource in a changing world.”

The project is funded by LLNL’s Carbon Initiative and the Office of Science, Biological and Environmental Research, Genomic Science Program, for the “Microbes Persist” Soil Microbiome Scientific Focus Area.