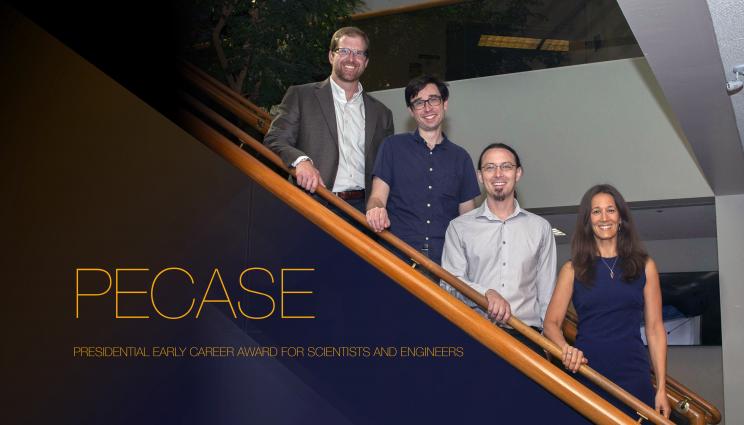 Four scientists from Lawrence Livermore National Laboratory (LLNL) have been selected for the prestigious Presidential Early Career Award for Science and Engineers (PECASE), the highest honor bestowed by the United States government on scientists and engineers who are early in their careers and have distinguished themselves in their respective fields.

Félicie Albert, Daniel Casey, Richard Kraus and Arthur Pak are among 315 recipients nationwide who will be honored in a ceremony in Washington, D.C. later this year.

Established in 1996, the PECASE acknowledges the contributions scientists and engineers have made to the advancement of science, technology, education and mathematics (STEM) education and to community service as demonstrated through scientific leadership, public education and community outreach.

She earned her Ph.D. in physics from the Ecole Polytechnique in France, her master's degree in optics from the University of Central Florida and her bachelor's degree in engineering from the Ecole Nationale Supérieure de Physique de Marseille, France. Her areas of expertise include the generation and applications of novel sources of electrons, X-rays and gamma-rays through laser-plasma interaction, laser-wakefield acceleration and Compton scattering. She has conducted many experiments using high-intensity lasers.

Albert was recognized for "innovative research advancing the development of Betatron X-rays from laser-wakefield accelerators as a novel probe for characterizing high energy density states of matter and for leadership through mentoring and service to the scientific community." She was nominated by the Department of Energy’s Office of Science, Office of Fusion Energy Sciences.

"I was born and raised in France, and I became an American citizen in 2018, so for me getting a U.S. presidential award is kind of the American dream. It is such an honor to receive this, even more so that I am sharing it with three colleagues from LLNL whom I know are exceptional scientists," Albert said. "This Lab really allows you to dream big and accomplish yourself as a scientist, and I have been fortunate to be supported by many colleagues and mentors since I have been here."

Daniel Casey is a physicist studying the properties and performance of inertial confinement fusion (ICF) implosions at the National Ignition Facility (NIF). He is co-leading a "principle degradations" effort to understand 3D areal-density asymmetries that threaten to damage and ultimately impact the quality of ICF implosions. Additionally, he is the experimental co-lead for a campaign that will test a high-temperature hohlraum along with campaigns within the ICF program that have successfully tested the impact of scale, velocity and adiabat on overall performance.

He received his Ph.D. in applied plasma physics from the department of nuclear science and engineering at the Massachusetts Institute of Technology and a bachelor’s degree in nuclear engineering from the University of New Mexico.

Casey was recognized "for exceptional contributions and impressive creativity, and innovation in the measurement and understanding of instability and mix for the Initial Confinement Fusion and High Density Physics Programs. He has consistently demonstrated leadership, originality and vision." He was nominated by the National Nuclear Security Administration.

"It’s an extraordinary and humbling honor to be among the PECASE awardees this year," Casey said. "That such a thing is even possible is a reflection of the amazing people at this Laboratory and a recognition of the valuable research that we accomplish together via teamwork. This award is proof that I am privileged to work with some of the most talented and versatile people in the world and remain humbly in their debt."

Richard Kraus is a research scientist in the Physics Division in LLNL’s Physics and Life Sciences Directorate. He serves as the project lead for an upcoming subcritical experiment at the Nevada National Security Site and as a designer and experimentalist in the NIF Materials Diffraction campaign. He also is the project lead for a materials portfolio within the Global Security Directorate.

Kraus was recognized for "advancing the field of materials science, planetary science and material issues that are critical to the nuclear security mission, through elegant and innovative design, analysis and understanding of dynamic compression experiments using gas-gun, magnetic compression and laser sources." He was nominated by the National Nuclear Security Administration

"It’s truly an honor to be recognized, and to be included in such an amazing cohort of early career scientists from around the country," Kraus said. "I had many incredible mentors along the way that have made this achievement possible."

Arthur Pak is a staff scientist in the NIF and Photon Science Directorate, where his research is focused on understanding how to optimize the performance of inertial confinement fusion experiments.

He was recognized "for the quantitative assessments and mitigation of radiation drive asymmetries in indirect drive inertial confinement fusion and for significantly contributing to the milestone achievement of 50kJ fusion yield in X-ray driven implosions at the National Ignition Facility." Pak was nominated by the National Nuclear Security Administration.

"This award highlights the exciting and impactful results that can be accomplished through a large collective effort," he said. "I am very grateful for the opportunity to be able to work together with a group of truly amazing scientists and technical staff on these challenging and important problems."