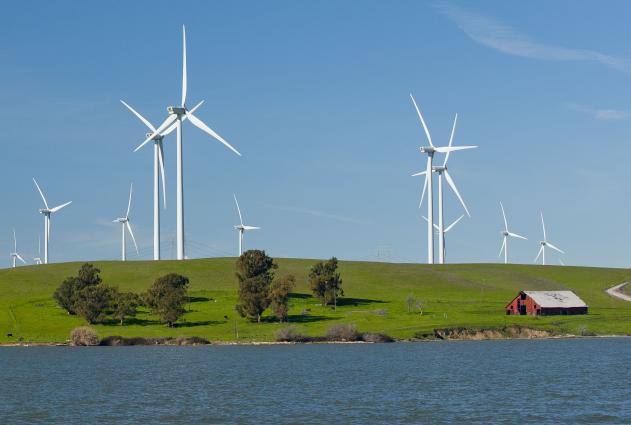 Wind turbines can produce different amount of power due to different "shapes" in the wind. Photos by Jacqueline McBride/LLNL 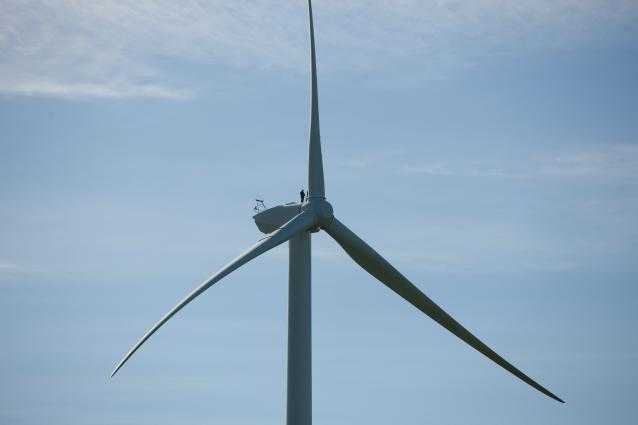 Power generated at a set wind speed is higher under stable conditions and lower under unsteady conditions.

Power generation is blowing in the wind

LIVERMORE, Calif. -- By looking at the stability of the atmosphere, wind farm operators could gain greater insight into the amount of power generated at any given time.

Power generated by a wind turbine largely depends on the wind speed. In a wind farm in which the turbines experience the same wind speeds but different shapes, such as turbulence, to the wind profile, a turbine will produce different amounts of power.

This variable power can be predicted by looking at atmospheric stability, according to Lawrence Livermore National Laboratory scientist Sonia Wharton and colleague Julie Lundquist of the University of Colorado at Boulder and the National Renewable Energy Laboratory.

In a paper appearing in the Jan. 12 edition of the journal Environmental Research Letters, Wharton and Lundquist examined turbine-generated power data, segregated by atmospheric stability, to figure out the power performance at a West Coast wind farm.

"The dependence of power on stability is clear, regardless of whether time periods are segregated by three-dimensional turbulence, turbulence intensity or wind shear," Wharton said.

While turbulence is a relatively well-known term in assessing turbine efficiency, wind shear -- which is a difference in wind speed and direction over a relatively short distance in the atmosphere -- also plays an important role when assessing how much power a turbine generates over certain time scales.

Wharton and Lundquist said that wind farm operators could better estimate how much power is generated if the wind forecasts included atmospheric stability impact measurements.

In the new research, Wharton and Lundquist gathered a year of power data from upwind modern turbines (80 meters high) at a multi-megawatt wind farm on the West Coast. They considered turbine power information as well as meteorological data from an 80-meter tall tower and a Sonic Detection and Ranging (SODAR), which provided wind profiles up to 200 meters above the surface, to look at turbulence and wind shear. Looking at upwind turbines removed any influence that turbine wakes may have on power performance.

The team found that wind speed and power production varied by season as well as from night to day. Wind speeds were higher at night (more power) than during the day (less power) and higher during the warm season (more power) than in the cool season (less power). For example, average power production was 43 percent of maximum generation capacity on summer days and peaked at 67 percent on summer nights.

"We found that wind turbines experienced stable, near-neutral and unstable conditions during the spring and summer," Wharton said. "But daytime hours were almost always unstable or neutral while nights were strongly stable."

"This work highlights the benefit of observing complete profiles of wind speed and turbulence across the turbine rotor disk, often available only with remote sensing technology like SODAR or LIDAR (Laser Detection and Ranging,)" Lundquist said. "Wind energy resource assessment and power forecasting would profit from this increased accuracy."

"Atmospheric stability affects wind turbine power collection,"
Lawrence Livermore ramps up wind energy research
In the wake of the wind
Extracting more power from the wind
Wind and the Grid