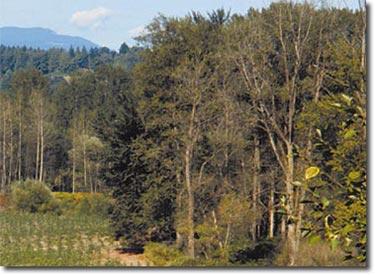 The North American black cottonwood Populus trichocarpa , a popular subject of commercial and ecological studies, was chosen as the first woody perennial plant to have its DNA sequence decoded by the DOE Joint Genome Institute because of its relatively compact genome, making it an ideal model system for trees. 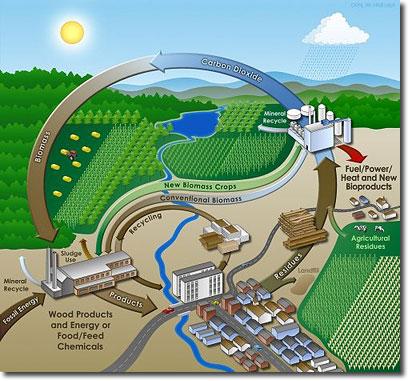 When compared with gasoline, ethanol from cellulosic biomass could dramatically reduce emissions of the greenhouse gas carbon dioxide (CO2). While burning gasoline and other fossil fuels increases atmospheric CO2 concentrations, the photosynthetic production of new biomass takes up most of the carbon dioxide released when bioethanol is burned.

WALNUT CREEK, Calif. — Wood from a common tree may one day factor prominently in meeting transportation fuel needs, according to scientists whose research on the fast-growing poplar tree is featured on the cover of the Sept. 15 edition of the journal Science .

The article, highlighting the analysis of the first complete DNA sequence of a tree – the black cottonwood, or Populus trichocarpa – lays the groundwork that may lead to the development of trees as an ideal “feedstock” for a new generation of biofuels such as cellulosic ethanol. The research is the result of a four-year scientific and technical effort led by the U.S. Department of Energy’s Joint Genome Institute (DOE JGI) and Oak Ridge National Laboratory (ORNL) and uniting the efforts of 34 institutions from around the world, including the University of British Columbia and Genome Canada; Umeå Plant Science Centre in Sweden; and Ghent University in Belgium.

“Biofuels could provide a major answer to our energy needs by giving the United States a homegrown, environmentally friendlier alternative to imported oil,” said DOE's under secretary for Science, Dr. Raymond L. Orbach. “Fine-tuning plants for biofuels production is one of the keys to making biofuels economically viable and cost-effective. This research, employing the latest genomic technologies, is an important step on the road to developing practical, biologically-based substitutes for gasoline and other fossil fuels.”

“Biofuels are not only attractive for their potential to cut reliance on oil imports but also their reduced environmental impact,” said Dr. Gerald A. Tuskan, ORNL and DOE JGI researcher and lead author of the Science study. “Biofuels emit fewer pollutants than fossil fuels such as gasoline. In addition, poplar and related plants are vital managers of atmospheric carbon. Trees store captured carbon dioxide in their leaves, branches, stems, and roots. This natural process provides opportunities to improve carbon removal from the air by producing trees that effectively shuttle and store more carbon below ground in their roots and the soil.

Poplar’s extraordinarily rapid growth, and its relatively compact genome size of 480 million nucleotide units – 40 times smaller than the genome of pine – are among the many features that led researchers to target poplar as a model crop for biofuels production.

“Under optimal conditions, poplars can add a dozen feet of growth each year and reach maturity in as few as four years, permitting selective breeding for large-scale sustainable plantation forestry,” said Dr. Sam Foster of the U.S. Forest Service. “This rapid growth coupled with conversion of the lignocellulosic portion of the plant to ethanol has the potential to provide a renewable energy resource along with a reduction of greenhouse gases.”

“The challenge of global warming requires global solutions,” said Martin Godbout, President of Genome Canada. “The international consortium that successfully sequenced the poplar genome provides a model for great minds working together and serves as an example of how discovery science can be applied to current environmental problems facing humanity.”

Among the major discoveries yielded from the poplar project is the identification of more than 45,000 protein-coding genes, more than any other organism sequenced to date and approximately twice as many as in the human genome, which is six times larger than the poplar’s. The research team identified 93 genes associated with the production of cellulose, hemicellulose and lignin, the building blocks of plant cell walls. The biopolymers cellulose and hemicellulose constitute the most abundant organic materials on earth, which by enzymatic action can be broken down into sugars that in turn can be fermented into alcohol and distilled to yield fuel-quality ethanol and other liquid fuels.

Poplar is the most complex genome to be sequenced and assembled by a single public sequencing facility and is only the third plant to date to have its genome completely sequenced and published. The first, in 2000, was the tiny weed Arabidopsis thaliana , an important model for plant genetics. Rice was the second, two years ago.

Populus trichocarpa is one of the tallest broadleaf hardwood trees in the western United States, native to the Pacific coast from San Diego to Alaska. The sequenced DNA was isolated from a specimen collected along the banks of the Nisqually river in Washington State.

The poplar project supports a broader DOE drive to accelerate research into biofuels production under the Bush Administration’s Advanced Energy Initiative. In August, the department announced it would spend $250 million over five years to establish and operate two new Bioenergy Research Centers. The DOE-supported research into biofuels is focusing on both plants and microbes in an effort to discover new biotechnology-based methods of producing fuels from plant matter (biomass) cost-effectively.

Earlier this year DOE published a study, Breaking the Biological Barriers to Cellulosic Ethanol , summarizing the views of more than fifty leading scientists in the field of biofuels research. The study expressed optimism about the prospects for finding cost-effective methods to produce fuels such as ethanol from cellulose in the not-too-distant future. Secretary of Energy Samuel W. Bodman has set a departmental goal of replacing 30 percent of current transportation fuel demand with biofuels by 2030.

DOE scientists envision a future in which vast poplar farms in regions such as the Pacific Northwest, the upper Midwest and portions of the southeastern United States could provide a steady supply of tree biomass rich in cellulose that can be transformed by specialized biorefineries into fuels like ethanol. Other regions of the country might specialize in different “energy crops” suited to their particular climate and soil conditions, including such plants as switchgrass and willow. In addition, a large quantity of biofuels might be produced from agricultural and forestry waste.

A 2005 joint study by DOE and the U.S. Department of Agriculture, Biomass as Feedstock for a Bioenergy and Bioproducts Industry: The Technical Feasibility of a Billion-Ton Annual Supply , found that the United States has enough agricultural and forestry land to support production of more than one billion tons of biomass, which could provide enough liquid biofuels to replace more than a third of current transportation fuel consumption and still continue to meet food, feed, and export demands.