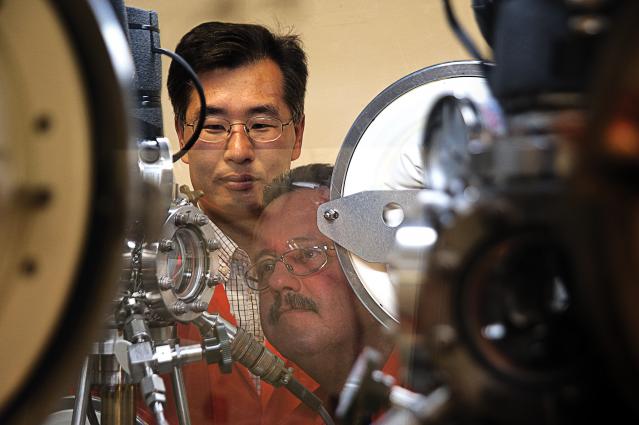 Livermore chemist Brandon Chung (left) and mechanical technologist Kenneth Lema peer through a glovebox to check the setup on the dilatometer that measures the dimensions of plutonium samples. 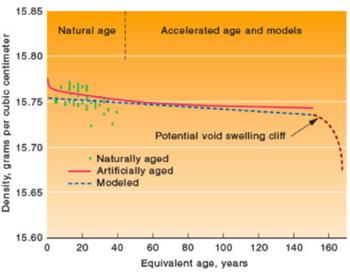 Small changes in density in naturally and artificially aged samples indicate that pits made from a plutonium-239 alloy will retain their size, shape, and strength despite increasing damage from self-irradiation. Results from long-term dilatometry experiments have increased confidence that the pits will function as designed up to 150 years after they are manufactured. 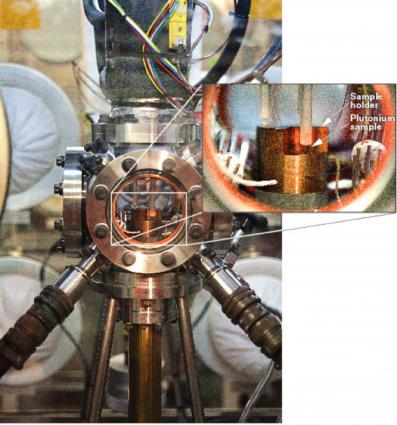 Samples of naturally and artificially aged plutonium, each only 2 or 3 centimeters long, are measured in dilatometry experiments to check for changes in a sample's volume over time.

The article below presents a summary of ongoing work at Lawrence Livermore National Laboratory. The work is to assess how radioactive decay in plutonium affects its material properties as they relate to the performance of nuclear weapons. This work is a continuation of the joint plutonium aging study done by Los Alamos and Lawrence Livermore National laboratories. That original work was extensively peer reviewed by a number of external technical groups to include a JASON review in 2006.

This continuing work shows that no unexpected aging issues are appearing in plutonium that has been accelerated to an equivalent of ~ 150 years of age. The results of this work are consistent with, and further reinforce, the Department of Energy Record of Decision to pursue a limited pit manufacturing capability in existing and planned facilities at Los Alamos instead of constructing a new, very large pit manufacturing facility (called the Modern Pit Facility or MPF) that would have been capable of producing hundreds of pits a year.

The nation must retain a level of pit manufacturing capability to support life extensions of the stockpile in order to ensure the effectiveness, safety and security of the deterrent, and guard against technological surprise.


Planning the future needs of the U.S. nuclear weapons stockpile as well as the nuclear weapons complex depends in part on maintaining confidence in the long-term stability of the pit, or core, of plutonium-239 residing inside every weapon. Scientists and engineers who ensure the safety and reliability of the nation's stockpile had long been concerned that the damage accumulated over decades as plutonium-239 self-irradiates could eventually compromise weapon performance.

In 1997, the National Nuclear Security Administration (NNSA) launched a comprehensive study at Lawrence Livermore and Los Alamos national laboratories to examine in detail how plutonium pits age and provide a firmer scientific basis for estimating the service life of these components. The study's results, announced in late 2006, showed that the slow degradation of plutonium in U.S. nuclear weapons would not affect warhead reliability for decades.

Independent research teams at the two laboratories performed extensive mechanical testing and laboratory-based experiments on aged samples of a plutonium-239 alloy-plutonium mixed with a small amount of gallium to stabilize the material in its delta phase at room temperature. Alloy samples were taken from 15- to 44-year-old plutonium pits and from plutonium that was artificially aged to 65 years. These tests showed no significant changes in important physical properties such as density and strength. In analyzing the test results, the research teams determined that the minimum lifetime for plutonium pits was at least 85 years-25 to 40 years longer than previously estimated. Now, six years later, these same naturally aged samples are 50 years old, and the accelerated alloy samples have reached an equivalent age of 150 years. Both sample lots continue to age gracefully, and extremely sensitive tests and high-resolution electron microscope images by Livermore chemists validate the confidence-building conclusions of the earlier study.

"The 2006 report was a work in progress," says chemist Pat Allen, the deputy program leader for enhanced surveillance and leader of the plutonium aging study. "The 2006 report and recent work continue to show no alarming trends and serve to validate our theories about how plutonium ages. However, we need to keep running tests on naturally aged specimens to see further into the future and make sure there are no surprises." Allen says that ongoing monitoring of the accelerated alloys is useful to establish the location of any aging "cliff," where changes would severely affect performance, even if the cliff did not occur in the near term.

Bruce Goodwin, principal associate director for Weapons and Complex Integration, says he is "extremely pleased" at the continuing positive results. "Both the original study by Livermore and Los Alamos and the ongoing long-term study by Livermore represent a tour-de-force accomplishment for stockpile stewardship." The results, he says, are highly positive for the safety and reliability of the stockpile and for avoiding the costs associated with remanufacturing pits.


Most interesting element around

Plutonium is often called the most interesting and perplexing element in the periodic table. The radioactive metal has seven distinct crystallographic phases; its dimensions change with temperature, pressure, and impurities; and it has many different oxidation states. In addition, the material's properties do not always change in linear fashion. Over the past two decades, researchers at Livermore and Los Alamos have greatly improved scientific understanding of plutonium, in particular how its aging mechanisms might degrade pit performance.

Livermore chemist Brandon Chung has been conducting tests on plutonium-239 alloys for more than a decade, measuring property changes as a function of age for the various samples. Changes arise principally from the alpha-decay process, in which a plutonium atom spontaneously emits a high-energy alpha particle (helium nucleus) and transforms, or decays, into a uranium-235 atom. "Self-irradiation of plutonium has all the requirements for potentially catastrophic damage," says Chung. As a result, scientists have sought greater assurance that a pit would retain its size, shape, and strength as the damage from alpha decay continued to increase.

One concern was that the accumulating damage might induce a change from the delta phase used in nuclear weapons to the denser and more brittle alpha phase. The alpha particle and the uranium-235 atom fly off in opposite directions, disrupting nearby atoms. The uranium-235 atom dislodges thousands of plutonium atoms from their positions in the crystal lattice. On average, each plutonium atom is displaced once every 10 years. However, in a fraction of a second, about 90 percent of these displaced atoms return to their normal lattice position, a process called self-healing. If a defect does not self-heal, the lattice may have vacancies where atoms are missing as well as interstitial atoms wedged between others.

After the alpha particle comes to rest in the lattice, it attracts two electrons to become a helium atom. Helium atoms slowly aggregate over time to form bubbles. If these bubbles coalesce into larger bubbles, they could begin to weaken a weapon component or otherwise change its volume or behavior. In addition, helium buildup combined with vacancies in plutonium's crystalline lattice could produce voids that swell, potentially causing the material to lose its shape and strength. This so-called void swelling typically happens suddenly once a critical threshold is reached, a process documented in other irradiated metals. The resultant swelling would dramatically increase the pit's volume and severely compromise its performance.

Spiking a sample to age It

To simulate the properties of the plutonium alloy decades into the future, Livermore researchers pioneered a technique to accelerate the aging process in samples by mixing plutonium-239 with isotopes that have shorter half-lives. When plutonium-239 (which has a 24,000-year half-life) is mixed with 7.5 percent by weight of plutonium-238 (with an 87-year half-life), the alloy will accumulate radiation damage at a rate 16 times faster than weapons-grade plutonium alone. (See S&TR , May 2007, U.S. Weapons Plutonium Aging Gracefully.)

The oldest accelerated samples, manufactured about 11 years ago, are now equivalent to 150-year-old plutonium alloy. Because the damage rate is much higher in artificially aged plutonium than in naturally aged alloys, the accelerated samples are maintained at a higher temperature, to ensure that the self-healing rate is appropriately accelerated as well.

Chung subjects the two sample types to a host of tests that record changes in dimension, density, and strength. For dilatometry experiments, he uses both 2- and 3-centimeter-long samples to ensure that oxidation is not affecting results and maintains them for years in a small chamber with a vacuum-controlled atmosphere. A dilatometer periodically measures the sample dimensions to an accuracy of 0.1 micrometers or less as a check for changes in volume.

Immersion density tests compare the expansion occurring in a parallel set of artificially and naturally aged alloys. These experiments record the amount of liquid displaced when samples are immersed in a fluid bath. A third set is tested for tensile strength (a material's ability to resist being pulled apart) and ductility (its ability to bend without breaking).

Dilatometry and immersion density measurements on both types of alloys consistently show slight volume swelling as samples age but no signs of void swelling. Overall, the dimensional tests indicate that scientists should expect only a 0.25-percent expansion in volume (and a concurrent decrease in density) over a 100-year period.

Static tensile strength tests demonstrate an increase in strength with age, with the rate of change slowing considerably after about 20 years. The results also indicate that ductility decreases (brittleness increases) as lattice damage and helium bubbles accumulate. Direct comparison of the artificially and naturally aged samples combined with results from age-aware strength modeling confirms both the strengthening behavior of plutonium and the accelerated-alloy approach to evaluating damage over time.

No indication of worrisome voids

Chung found no indication of void swelling in the tests he conducted. Transmission electron microscope analyses performed by Livermore microscopist Mark Wall validated Chung's results, revealing that helium bubbles are distributed uniformly throughout the plutonium alloys. Although helium buildup is substantial after many decades, bubbles stop growing once their diameter reaches 1 to 2 nanometers, and bubble density increases with age. As shown with the accelerated samples, helium accumulation should not dramatically affect the dimensional properties of plutonium for up to 150 years after pits are manufactured. In addition, the age-induced changes do not pose any concern for the metal's strength based on current theory and simulation results.

"Clearly, the findings indicate that lattice damage and helium in-growth are not leading to catastrophic aging effects such as void swelling," says Chung. "Because we have improved the scientific understanding of plutonium aging, we have greater confidence in the reliability of pits in the stockpile." Allen adds that the consistent results produced by Livermore's continued study of plutonium aging validate NNSA's strategy of reusing pits in life-extension programs, which prolong the service life of an aging warhead or bomb and enhance its safety and security. (See S&TR , March 2012, Extending the Life of an Aging Weapon.)

This graceful aging of plutonium also reduces the immediate need for a modern high-capacity manufacturing facility to replace pits in the stockpile. "In the near term, the nation can save tens of billions of dollars that might be required to build a new production facility," says Allen. He notes, however, that the nation must retain a certain level of manufacturing capability to enable a speedy response should an unexpected problem arise.

Plutonium pits in the stockpile were manufactured at the Department of Energy's Rocky Flats Plant, which ended production in 1989. Rocky Flats used a cast-and-wrought approach, in which melted plutonium was poured into a mold, rolled, and pressed into the desired shape. A new facility designed to meet current environmental and safety standards would adapt a simplified manufacturing process such as cast-in-place, in which melted plutonium is poured into a mold that is near the final product shape. Because most of the tests to date have been performed on alloys produced at Rocky Flats, scientists may need to begin systematic studies on those newly manufactured plutonium alloys to ensure that the new pits will age just as gracefully as the current ones. The Livermore team will continue to assess the plutonium-239 alloy indefinitely, carefully monitoring the properties of naturally and artificially aged samples. Says Chung, "We plan to obtain data for as long as possible to give us still greater confidence."