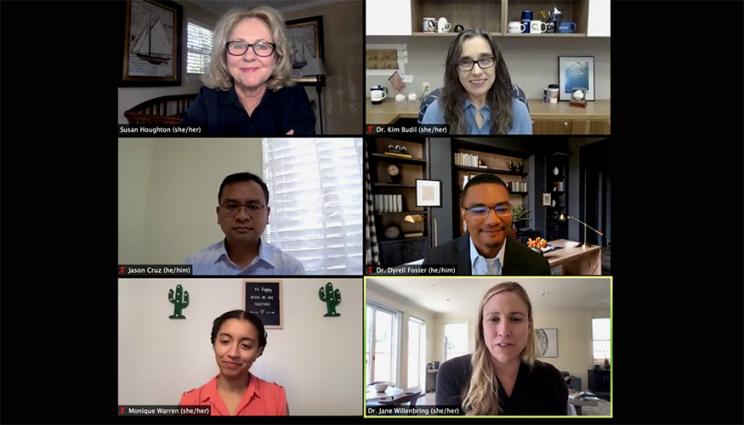 The "Picture a Scientist" virtual panel discussion was attended by more than 400 employees, community members, students and retirees who signed up to watch the film and the live discussion.

The Lawrence Livermore Laboratory Women’s Association (LLLWA) and Diversity, Equity and Inclusion programs at Lawrence Livermore National Laboratory (LLNL), in partnership with the Livermore Lab Foundation (LLF), hosted a candid and meaningful virtual panel presentation discussing a variety of issues raised in “Picture a Scientist.” The documentary chronicles the bias, harassment and institutional discrimination experienced by women researchers throughout their careers and addresses how they are paving the way for a new generation of women scientists. Watch the full presentation here.

Prior to the live panel presentation, LLNL employees, students, community members and retirees were given a special screening of the film to enhance awareness of gender bias and diversity, equity and inclusion in science, technology, engineering and mathematics (STEM) fields. “Picture a Scientist” is now available to stream via Netflix.

Sharing their insight and perspectives were panelists Kim Budil, LLNL director; Jane Willenbring, associate professor of Geological Sciences at Stanford University (a researcher featured in the film); and the president of Las Positas College, Dryell Foster. They were joined by LLNL employees Jason Cruz, systems engineer and chair of LLNL’s Asian Pacific American Council (APAC) employee resource group; and Monique Warren, environmental engineer and past chair of the African American Body of Laboratory Employees (ABLE) employee resource group. The panel was moderated by Susan Houghton, a consultant for LLF.

“The foundation’s mission has always been to ‘open the door’ to help anyone pursue a STEM career. However, when harassment, conscious or even unconscious bias gets in the way of that goal, we all lose. ‘Picture a Scientist’ was an eye-opening opportunity to fully understand the ramifications of sexism and discrimination in STEM and to have a transparent discussion,” said Sally Allen, LLF’s executive director.

“Watching the documentary really opened my eyes,” Cruz said. “I had several moments of introspection as a result. I’m glad we were able to advance the conversation as an example of what we want Lab culture to be.”

Warren shared her thoughts on the difficulty of being at the intersection of more than one diverse background. “The film did such a great job of showing the challenges of this situation. I know for me as a woman, as a black woman and as a young woman, sometimes when things happen you wonder, is it because I am a woman, is it because I am a person of color or is it because I am young? That confusion can make you spend more time analyzing things and trying to figure out how to respond to situations and it makes things so much harder.”

Responding to a quote from the film about moving from a culture of compliance to a culture of change, Budil said: “People often talk about culture changes as though it’s something that will be done to them. We create our culture. We must embrace the fact each of us is accountable and responsible for the environment we create around us. If we behave differently, we can influence people around us to behave differently as well.”

Accountability in creating change was echoed by Foster as well. “These conversations and these dialogues are critically important as we know, and they certainly need to continue, but they also need to be followed with actions and committing to changes,” he said. “We all have a responsibility, and we are all in this together. No one is alone. No one should be made to feel alone, we must continue to support one another. We must call out injustice when we see it and be courageous and bold in that matter.”

As someone who was featured in the film and experienced these issues firsthand, Willenbring brought a very poignant and personal perspective to the panel. “I am really invigorated and inspired and thinking about how science culture has been one way for a very long time and so it seems like a really hard problem, but it’s also shaped by everything that we do every day,” she said. “To me that’s very inspiring to think that I can go out and change the culture immediately with the people around me. That’s something that I always think about, and it always makes me smile.”